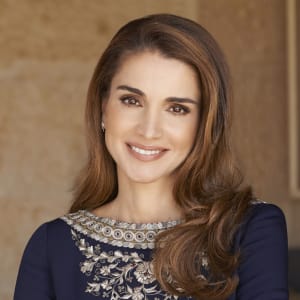 Queen Rania of Jordan is best known for her advocacy work in public health, education and as an outspoken opponent of the practice of “honor killings.”

Born in Kuwait and forced to flee during the first Gulf War in 1991, Queen Rania's early life was much like thousands of other Palestinians'. In 1993 she met Prince Abdullah II bin al-Hussein of Jordan at a party, and the two were married six months later. Rania is a strong progressive female voice in the Arab world and a powerful global advocate for education, health and women's rights.

Marriage to a Prince

Born Rania al Yassin on August 31, 1970, in Kuwait to Palestinian parents. Rania and her two siblings were raised in the West Bank town of Tulkarm, where her father was a physician. She was educated at the New English School in Kuwait City before enrolling at the American University in Cairo, Egypt, from which she received a degree in business administration in 1991.

During the first Gulf War of 1991, Rania's family was forced to flee from Kuwait along with thousands of other Palestinian families. They resettled in Amman, Jordan, where Rania joined them after completing her university studies. After a brief stint working in marketing at Citibank, Rania accepted another marketing job at Apple's office in Amman. In January 1993, Rania accompanied an Apple co-worker to a dinner party being thrown by the sister of Prince Abdullah II bin al-Hussein of Jordan, who was also at the party. In an unlikely plot twist that sounds like something drawn from a Disney movie, the common-born young woman and the prince fell instantly and deeply in love. Rania and Prince Abdullah were engaged just two months after their meeting. Then, in June 1993, less than six months after their first encounter, the couple married.

Prince Abdullah never expected to ascend to the throne, as his uncle had long been slated to become king of Jordan upon the death of King Hussein bin Talal, who had ruled the country since 1952. However, from his deathbed in 1999, King Hussein unexpectedly named his son, Prince Abdullah, as his successor. Upon the king's death on February 7, 1999, Abdullah became King of Jordan. Six weeks later, he officially elevated his then 28-year-old wife to the status of queen. Announcing her coronation over state television, King Abdullah declared that his wife's non-royal origins made her better connected to "the hopes and outlooks of people" since she "truly believes in their causes."

An Advocate for Many Causes

Rania's youth, royal status and glamorous beauty instantly made her something of an international icon. She was photographed at fashion shows and high-society social events, usually mingling with a beautiful coterie of the global elite. Through it all, however, Queen Rania remained remarkably grounded, using her position to advocate on behalf of a variety of causes she believed to be important. A progressive female voice in the Arab world, Queen Rania became a powerful advocate for reform in education and public health, the development of a sustainable tourism industry in Jordan, youth empowerment and cross-cultural dialogue between the West and the Arab world. Perhaps most notably, she worked as an outspoken opponent of the traditional practice of "honor killings," the murder of women by members of their own family for perceived violations of Islamic moral code.

Queen Rania eventually turned to technology to advocate for her causes and to help dispel Western stereotypes about the supposed backwardness of the Middle East. In March 2008, she created her own YouTube channel aimed at engaging Western viewers in a discussion about their perceptions of the Arab world. Her first video post was viewed some 1.4 million times within days of its release. Perhaps befitting a former Apple employee, Queen Rania also has a Facebook page, an active Instagram account, her own website and more than 4.5 million followers on Twitter, where she describes herself as "a mum and a wife with a really cool day job."

For Queen Rania, part of that job involves sharing her own expertise to encourage innovation, entrepreneurship and an understanding of technology, particularly among Jordanian youth. Working with the Jordanian Ministry of Education she has established numerous initiatives to achieve these goals in her own country, while also taking a wider approach to advocate for education for young people around the world. Among these international endeavors are 1GOAL and the Global Campaign for Education and the United Nations' Girl's Education Initiatives, for which she serves as the honorary chair. She has also worked with the UN on its Sustainable Development Goals and with UNICEF in its efforts to provide aid to the children of the world.

Yet despite these achievements and lofty goals, she has remained characteristically humble: "I just wake up and feel like a regular person," Queen Rania writes on her site. "At the end of the day you are living your life for the people that you represent. It's an honour and a privilege to have that chance to make a difference—a qualitative difference in people's lives—and it's my responsibility to make the most out of that opportunity."

Queen Rania has received numerous honorary degrees and humanitarian awards for her work, including an honorary doctorate in “Science Development and International Cooperation” from Sapienza University, Italy; the James C. Morgan Global Humanitarian Award; and the YouTube Visionary Award, to name just a few. In 2010 she was named Glamour magazine's Woman of the Year, and in 2011 the most beautiful first lady by Harper's Bazaar.

Queen Rania has also published four children's books to date, inspired by her own experiences as a child: the New York Times best seller The Sandwich Swap, Eternal Beauty, Maha of the Mountains and The King’s Gift.