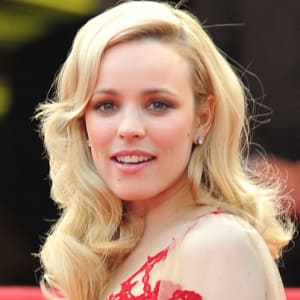 Rachel McAdams is a Canadian actress best known for her roles in ‘Mean Girls,’ ‘The Time Traveler’s Wife,’ ‘Sherlock Holmes,’ ‘The Vow’ and ‘Spotlight.’

Who Is Rachel McAdams?

Rachel McAdams is a Canadian actress born on November 17, 1978, in London, Ontario, Canada. The former child competitive figure skater discovered her acting passion at age 12. She played a teen diva in her breakout role in the 2004 hit film Mean Girls. The actress has also appeared in box-office hits like Wedding Crashers, The Family Stone, The Time Traveler's Wife, Sherlock Holmes and The Vow. She received her first Oscar nomination for her role as a Boston Globe reporter in the 2015 drama Spotlight.

Canadian actress Rachel McAdams was born on November 17, 1978 in London, Ontario, Canada. Her father, Lance, worked as a mover, and her mother, Sandra, worked as a nurse. Together, they raised McAdams and her younger siblings, sister Kayleen and brother Daniel.

McAdams started competitive figure skating at age 4 and discovered acting at age 12, when she viewed a children's theater group performance. "I told my mother that I had to be in it, that I would die if I wasn't," McAdams said in an interview with The New York Times. Her parents fully supported her ambitions, and McAdams joined the Original Kids Theatre in her hometown.

Through high school, McAdams acted in local productions. She went on to study theater at York University in Toronto, where she performed in several stage and student film productions.

In 2001, McAdams landed her debut television performance, playing a bulimic girl in the Disney series The Famous Jett Jackson. She made her film debut one year later, in the Canadian/Italian-produced film My Name is Tanino.

McAdams earned her first significant accolade for a supporting role in 2002's Perfect Pie; for her role in the low-budget film, she was nominated for a Genie Award (Canada's Oscar). With her career now gaining momentum, McAdams moved to Los Angeles, where she was cast opposite Rob Schneider in the 2002 comedy The Hot Chick. Later, in an interview with Vogue magazine, she amitted that the movie—her first film in the United States—was a "huge milestone" for her. McAdams returned to Canada soon after, and appeared in the TV series Slings and Arrows (2003), for which she won a Genie Award.

'Mean Girls' and 'The Notebook'

McAdams played a title role in the hit teen film Mean Girls (2004), written by Saturday Night Live alum Tina Fey. Appearing with co-stars Lindsay Lohan and Amanda Seyfried, the film opened doors for the budding actress. That same year, she played the lead role in The Notebook (2004), a screen adaptation of Nicholas Sparks's romance novel. She caught the eye of the public in both films, winning two MTV Movie Awards in 2005 for breakthrough female (Mean Girls) and best kiss (The Notebook).

In 2005, McAdams appeared in several films that achieved great commercial success, including the comedy Wedding Crashers, the thriller Red Eye and the dramedy The Family Stone.

Hiatus from the Industry

In what many in the industry viewed as an unusual move made at the height of her career, McAdams took a break from 2006 to 2007 to focus on herself. "When Wedding Crashers came out, everyone was hyped up, calling Rachel the new 'It Girl,'" said Tom Bezucha, director of The Family Stone, in an Elle interview. "Her selectiveness shows wisdom greater than her years about her place in the industry. She's very purposeful in sidestepping Hollywood. She has the opportunity to be this huge, huge movie star, but in her heart she's a character actress."

In the same interview, McAdams revealed, "I'm not going to make movies just to make movies. I have to be passionate about it. And at the same time, I can get very distracted when I'm working, and I like to get back to my life a lot." During her break, the actress turned down roles in films such as Mission Impossible 3, Casino Royale, The Devil Wears Prada and Get Smart.

Return to the Big Screen

McAdams returned to work in 2008, appearing in Married Life and The Lucky Ones, which both failed to achieve box-office success. Things turned around in 2009, with roles in higher-grossing films like State of Play, The Time Traveler's Wife and Sherlock Holmes.

Her return to prominence continued over the next few years, with critically acclaimed roles in Morning Glory (2010) and Woody Allen's Midnight in Paris (2011)—in which McAdams and her co-stars received a nomination for the Screen Actors Guild Award (for outstanding performance by a cast in a motion picture).

McAdams achieved her biggest box-office success with her leading role ($196 million worldwide) in the 2012 drama The Vow. The film is based on the true story of a husband (Channing Tatum) who tries to rebuild his relationship with his wife (McAdams) after a car crash injury impairs her memory.

In 2015, after turns on Aloha and Southpaw, McAdams portrayed reporter Sacha Pfeiffer in the lauded drama Spotlight. The film follows a team of dedicated Boston Globe reporters who uncover the Catholic Church sexual abuse scandal within the newspaper's home city. For her role, McAdams earned the first Oscar nomination of her career, receiving a supporting actress nod. The film itself won an Academy Award for best picture.

In 2015, McAdams also starred as a detective in the second season of True Detective, and she voiced the role of the mother in the animated film version of The Little Prince. In 2016, the actress appeared in the superhero blockbuster Dr. Strange, starring opposite Benedict Cumberbatch. She then starred in the sexually charged drama Disobedience (2017), before teaming up with Jason Bateman for the dark comedy Game Night (2018).

From 2004 through 2007, McAdams dated Ryan Gosling, her Canadian co-star in The Notebook. Gosling told GQ in 2007, "God bless The Notebook, it introduced me to one of the great loves of my life." The pair reunited in 2008 before splitting again the next year.

McAdams launched Green Is Sexy in 2007, an Earth-conscious website that offers environmental tips. According to a post by McAdams on her website, she's making an effort to lighten her footprint on the earth—supporting tree planting organizations, switching her house to green power and developing "an OCD for unplugging anything with a plug."

In 2009, the actress briefly dated American actor Josh Lucas, the ex-beau of actress Salma Hayek. McAdams was also tied to Welsh actor Michael Sheen, her co-star in Midnight in Paris.

McAdams's interests include cooking, though she has admitted, "I'm not an amazing cook, but I can follow a recipe," and "I wouldn't mind running a restaurant." The actress has long kept a healthy lifestyle and practiced kundalini yoga. She once said about being a former vegetarian, "it made me very tired. I just ate pasta—I was the most unhealthy vegetarian ever! I'd like to try it again now that I know about quinoa and bulgur. I think I'd be better the second time around."

McAdams began dating screenwriter Jamie Linden in 2016. The following year, shortly after revealing news of her pregnancy, the actress gave birth to a baby boy in April.