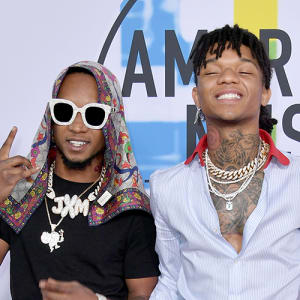 Who Is Rae Sremmurd?

They have been described as the “’hood ’NSync” thanks to their unique blend of Southern-fried rap, hashtaggable hooks and sunny-side-up lyrics. Rae Sremmurd — brothers Slim Jxmmi and Swae Lee — are on a mission to celebrate “the good life, the family, safe sex and paychecks, riding in the front seat, good vibes”; a sugar-rush of youthful optimism for an anxious world. Their melodic-yet-experimental electro-trap sound owes a debt to both hip hop and pop, yet conforms with neither: it is “weird and acceptable,” in the words of Swae Lee. Beyoncé is a fan — Swae Lee wrote the hook for her Super Bowl-quaking anthem, "Formation."

But Rae Sremmurd (pronounced "Ray-Shrim-er") are best known for their 2016 smash "Black Beatles," which soundtracked the Mannequin Challenge viral meme — even the likes of Michelle Obama and Paul McCartney joined in. “When you’ve reached a Beatle,” Lee subsequently noted, “it’s the ultimate co-sign.”

Guided by the producer Mike WiLL Made-It, Rae Sremmurd released their debut single, "No Flex Zone," via EarDrummers Entertainment, in May 2014. (The label had been created the previous year via a deal with Jimmy Iovine at Interscope). The single went on to sell 1 million copies, reaching No. 36 on the Billboard Hot 100 chart.

Their second single, "No Type," released in September 2014, performed even better, reaching No. 16 on the Billboard chart. Yet the world beyond their Generation-Z fanbase seemed unsure what to make of Rae Sremmurd. Jxmmi and Swae were by now in their early twenties, but looked and sounded much younger. On "No Flex Zone" they autotuned the pitch of their voices to early-adolescent levels. One of their more vociferous critics, the Hot 97 DJ Ebro, wrote them off as a novelty act like Kris Kross, now (barely) remembered for wearing backwards jeans in the 1990s. He also claimed they didn’t write their own songs; Rae Sremmurd shot back with a swaggering, profanity-strewn 20-minute freestyle broadcast online by the veteran U.K. hip hop DJ Tim Westwood. The beef continued on Twitter.

Rae Sremmurd’s debut album, SremmLife, came out in January 2015. Among its guests were Nicki Minaj, Young Thug, Jace and Big Sean. The album was certified platinum the following year. Fans didn’t have to wait long for a follow-up; sophomore album SremmLife 2 was released in June 2016.

Its first two singles, "By Chance" and "Look Alive," underperformed. But on their third single, the hook-laden "Black Beatles," Rae Sremmurd took things to another level. Featuring a guest rap from Gucci Mane, "Black Beatles" was released in September — only reaching the No. 1 spot on the Billboard chart in November after going spectacularly viral.

This was no accident. "Black Beatles’" association with the Mannequin Challenge meme, which clogged the planet’s social-media feeds in October 2016, was the result of a whip-smart marketing campaign. Interscope, with help from the internet specialists PizzaSlime, decided to target — rather than create — a meme as it was blowing up, and to make "Black Beatles" the soundtrack of that meme. With the Mannequin Challenge, they saw their opportunity. The challenge was invented by Florida high-school students who posed, frozen like mannequins, for the intro of a song before going wild when the beat kicked in. As the hashtag started trending, it became evident to Interscope/PizzaSlime that no particular song was associated with it. Rae Sremmurd quickly recorded and released a video of them doing the challenge onstage during a concert, to the strains of "Black Beatles."

It worked. The internet took the bait. "Black Beatles" rapidly became the theme song for the Mannequin Challenge. The single subsequently rocketed to the No. 1 spot on the Billboard Hot 100 chart, where it remained for 12 weeks. (It also went Top 10 in the U.K., Australia, New Zealand, Indonesia, Ireland and Canada.) Billboard named it best pop song of 2016. Nicki Minaj and Mike WiLL Made-It did a remix, "Black Barbies." On the back of "Black Beatles’" internet-breaking success, SremmLife 2 reached No. 4 on the Billboard album chart.

Their next single, "Swang," released in January 2017, did not perform quite so meteorically. It peaked at No. 26 on the Billboard chart. "Black Beatles" was a tough act to follow. But by now public attention was beginning to focus on a song from Rae Sremmurd’s debut album, released two years earlier. The song’s title, "Up Like Trump," was certainly attention-grabbing — but as the duo were at pains to point out, they wrote the song when Trump was just a famous businessman, not the 45th president of the United States. "Up Like Trump" was never a political endorsement, as some thought, Trump’s name was simply a metaphor for wealth. By March 2017, Rae Sremmurd had taken to introducing their own song onstage with the words: “F*** Donald Trump. We’re voting for Bernie Sanders.”

The Rae Sremmurd story begins in Inglewood, California, on December 29, 1991 — the day Aaquil Ibinshaman Brown (Slim Jxmmi) was born. His brother Khalif Malikbnsham Brown (Swae Lee) arrived 17 months later on June 7, 1993. They lived with their mother, Bernadette, a U.S. Army soldier, and their younger brother, Michael. Their father abandoned the family when the boys were small. The brothers spent their childhoods living in a series of army bases, moving with their mother as she was stationed in California, Mississippi, Maryland and Texas.

In Texas, one of 10-year-old Jxmmi’s friends introduced him to the music software FruityLoops, sparking an instant obsession. Soon the family moved again, back to Mississippi, this time to live with Bernadette’s new partner, who became the boys’ stepfather. They settled in the modestly sized city of Tupelo — the birthplace of Elvis Presley. By now Bernadette had left the army, so in order to make ends meet, their stepfather sold drugs. “He was doing whatever he had to do, keeping us in school, getting us to school,” Swae told Fader magazine. Whenever their mom and stepdad argued, the older two brothers hid in their room, writing rhymes and making beats. “We hid in our own little world of music,” Swae told the New York Times.

When Jxmmi (pronounced “Jimmi”) and Swae were 14 and 13 respectively, they formed their first group, Dem Outta St8 Boyz — the name was a nod to their peripatetic childhoods. The third group member was Middlebrooks, whom the brothers met playing basketball. At the time, Jxmmi and Swae were calling themselves Caliboy and Kid Crunk; Middlebrooks was Lil Pantz. They began to release music and low-fi videos through social media. Another boy, Jermarcus Jackson — aka JJ Srem — became their touring DJ.

When Bernadette and their stepfather split up, the brothers began skipping school to work more on their music. Their late nights caused arguments with Bernadette, to the point where they left home while still in high school, moving into an abandoned house with a friend of their stepfather’s. Swae had a job at McDonald’s, which kept them afloat. In 2010 they made their TV debut in an amateur competition on the Black Entertainment TV network (BET). Lil Pantz left the group soon after, to be replaced by another friend of the brothers, Andre Harris (aka King Dre). They appeared again on BET the following year, traveling to New York to perform, leading to interest from Def Jam and Sony, though this came to nothing.

Back in Tupelo, Dem Outta St8 Boyz continued to build their local fanbase and promote their sound. With far-sighted acumen, they kept their lyrics clean so their music would “spread faster, because everyone could listen to it,” Jxmmi has said. They threw house parties where “we made sure everybody knew we didn’t give a f*** what color you are,” Swae told Fader. “The people who came were the people who understood that the world is bigger than black and white.”

In 2011 they moved to Atlanta to further their music careers, hooking up with the emerging super-producer Mike WiLL Made-It and his EarDrummers production crew. But after a year they ran out of money and returned home. Jxmmi got a job in a mattress factory and rented an apartment for the three of them. They returned to Atlanta a few months later for another try, and this time their hard work paid off, though not before Andre had quit the band, “overwhelmed” by the pressure (he later became successful in his own right under the name BoBo Swae).

Rae Sremmurd is set to release a third album, SremmLife 3, in 2018 as well as solo albums from Swae and Jxmmi. And they will continue to showcase Mississippi hip hop on their label, SremmLife Crew Records, (signings include BoBo Swae, Impaxt and Riff 3x). And who would bet against a whole lot more of the good life, safe sex and paychecks?