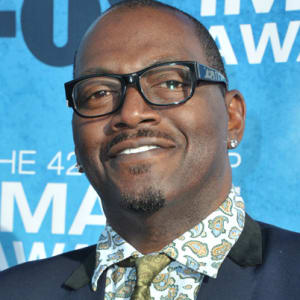 Record producer and musician Randy Jackson is notable mostly as a judge on the talent-search TV show American Idol.

Born on June 23, 1956, in Baton Rouge, Louisiana, Randy Jackson is a music industry veteran who emerged from behind the scenes to become a famous television personality as a judge on the popular singing competition show American Idol. Jackson spent years as a record producer and an executive with Columbia Records and MCA Records before landing his spot as an American Idol judge.

An Early Start in Music

Born Randall Matthew Jackson on June 23, 1956, in Baton Rouge, Louisiana, music industry veteran Randy Jackson has become a famous television personality from his work as a judge on the popular singing competition American Idol. He first started playing bass guitar at the age of 13. The youngest of three children, Jackson used to slip out of his family's home at night to play at local clubs.

Jackson went to nearby Southern University to study music. Graduating in 1979, he pursued his dream of being a professional musician, playing with everyone from Herbie Hancock to Bob Dylan. He was even a temporary member of the 80s rock band Journey in 1983 and 1986. Jackson also recorded and toured with such well-known artists as Jerry Garcia, Mariah Carey, Bruce Springsteen and Madonna. Working behind the scenes, Jackson spent years as as a record producer and an executive with Columbia Records and MCA Records.

Jackson became one of the judges on the hit FOX talent search series American Idol in 2002, along with Simon Cowell and Paula Abdul. Highly regarded within the music industry, Jackson quickly became respected among contestants and fans for his constructive criticism. Sharing his secrets of success, Jackson wrote the 2004 book What's Up Dawg? How to Become a Superstar in the Music Business.

For MTV, Jackson helped develop and produce America's Best Dance Crew, which premiered in February 2008. "It's very much more street than whatever you've seen … It's really kind of raw and has a lot of great imagery," he explained to People magazine. The following month, Jackson released a compilation album, which featured performances from his American Idol cohort Paula Abdul, as well as musicians Joss Stone, Richie Sambora of Bon Jovi, and Mariah Carey among others. "It's kind of a Quincy Jones record with all sorts-country, pop, hip-hop, R&B and jazz songs," Jackson told Entertainment Weekly.

In March 2012, Jackson launched a syndicated radio program, Randy Jackson's Hit List, for Westwood One. Around this same time, he branched out into eyewear. Known for his distinctive glasses, Jackson has his own line of frames through Zyloware eyewear.

In May 2013, Jackson—by this time the last original judge on American Idol—announced that he was leaving the popular singing-competition show after season 12. Jackson addressed his decision to leave the program in a statement, saying, "Yo! Yo! Yo! To put all of the speculation to the rest, after 12 years of judging on American Idol, I have decided to leave after this season."

In his personal life, Jackson found out that he had type 2 diabetes in 1999. He changed his diet and exercise routine to combat the illness, and he also underwent gastric-bypass surgery in 2003. These efforts led to a more than 100-pound weight loss. In 2008, he offered readers advice on how to improve their health with Body with Soul: Slash Sugar, Cut Cholesterol and Get a Jump on Your Best Health Ever. He wrote the book, he said, "to share my story, what I went though, and to talk to people about how to prevent diabetes," according to Diabetes Forecast.

A supporter of many charitable organizations, Jackson has served as the spokesperson for the American Heart Association's "Heart of Diabetes" campaign. He also established the Randy Jackson Childhood Obesity Foundation.

Jackson lives in Los Angeles, California, with his wife, Erika. The couple has been married since 1995, and they have two children together, daughter Zoe and son Jordan. He also has a daughter, Taylor, from his first marriage.