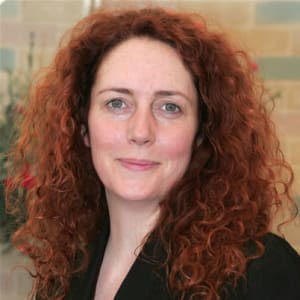 Rebekah Brooks resigned as editor of the British paper that hacked into voicemail for news scoops.

Rebekah Brooks is the former editor of British tabloid News of the World, best known for resigning from the paper during the 2011 phone-hacking scandal, as well as for her close relationship with Rupert Murdoch.

Born Rebekah Mary Wade on May 27, 1968 in Warrington, Cheshire, Brooks attended Appleton Hall County Grammar School. She began her career in journalism at age 20, working the news desk at the tabloid The Post.

Brooks' relationship to Rupert Murdoch dates back to 1989, when she first took a job as a secretary at the Sunday tabloid News of the World. She soon became a features writer, focusing on soap operas, before becoming deputy editor. Going back and forth between News of the World and sister tabloid The Sun, Brooks took over as editor of News of the World in 2000. At the age of 32, she was the youngest editor of a national newspaper in the country's history.

Brooks also served as chief executive of News International, the subsidiary of Rupert Murdoch's NewsCorp, which owns both tabloids. Over her two decades of climbing the ranks of Murdoch's news empire the two became close personal friends, and she is sometimes referred to in the media as Murdoch's "adopted daughter."

Controversy at News of the World

During her time at News of the World, Brooks oversaw several controversial policies. One was the "naming and shaming" of convicted child sex offenders— the printing of photographs and names of known pedophiles. When angry mobs attacked the homes of suspected offenders, including at least one case of a mistaken identity, Brooks was heavily criticized for promoting vigilantism.

In March of 2003 Rebekah Brooks she was called before a Parliamentary committee. She admitted that News of the World had made payments to police officers in the past—an admission that damaged her reputation with the British public.

Rebekah Brooks married British actor Ross Kemp in 2002. In 2005, the editor, still using her maiden name at the time, was herself the center of tabloid news when she was arrested for allegedly assaulting Kemp. Charges were never filed, but the couple separated in 2006, officially divorcing in 2009. The same year, Brooks married author Charlie Brooks, taking his last name.

On July 4, 2011, a new scandal emerged which eclipsed anything Brooks had experienced in her career. Damning new claims emerged about a long history of phone-hacking at News of the World, including under Brooks' leadership. As new details emerged throughout the month of July, they ignited one of the most far-reaching scandals in recent British history.

One of the most outrageous revelations was that under Brooks, News of the World hacked the mobile phone of Milly Dowler, a 13-year-old girl who went missing in 2002. Dowler was found dead six months later, but News of the World allegedly deleted voicemail messages from her phone during the investigation into her disappearance —giving her parents false hope that she might be alive. It was also alleged that the tabloid hacked into the phones of relatives of the victims of London's 7/7 attacks. The issue of paying off police officers surfaced again, as well. Two high-ranking officers resigned from Scotland Yard as a result.

With Rebekah Brooks and News International at its center, the phone-hacking scandal spiraled out to the highest levels of government. British prime minister David Cameron came under fire for his close relationship with Brooks. Cameron attended Brooks' 2009 wedding, and hosted her twice at Chequers, his holiday residence. Cameron's former director of communications was Andy Coulson, who had preceded Brooks as editor of News of the World, and resigned after a previous phone-hacking incident.

The details of the News of the World phone hacking incidents shocked many in the British public and government, and the media firestorm around it was unprecedented. The Milly Dowler revelations in particular lead to calls for Brooks' resignation. Initially Rupert Murdoch refused calls for Brooks' resignation, and refused to accept it when she offered. However, the scope of the scandal widened each day and the public's anger mounted, Brooks stepped down on July 15, 2011. In a statement she said, "As chief executive of the company, I feel a deep sense of responsibility for the people we have hurt and I want to reiterate how sorry I am for what we now know to have taken place. I have believed that the right and responsible action has been to lead us through the heat of the crisis. However my desire to remain on the bridge has made me a focal point of the debate. This is now detracting attention from all our honest endeavours to fix the problems of the past. Therefore I have given Rupert and James Murdoch my resignation. While it has been a subject of discussion, this time my resignation has been accepted."

Rebekah Brooks faced another blow on July 17, 2011, when she was arrested by the Metropolitan Police on suspicion of conspiring to intercept communications and on suspicion of corruption allegations. Brooks was not charged with anything, and released on bail until October 2011. Andy Coulson was also arrested.