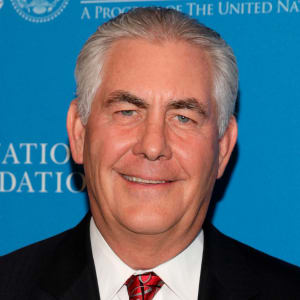 Rex Tillerson rose through the ranks of ExxonMobil to become its CEO and chairman in 2006. He served as the 69th U.S. secretary of state from February 2017 to March 2018.

Who Is Rex Tillerson?

Rex Wayne Tillerson (b. March 23, 1952) was sworn in as the 69th secretary of state for the United States on February 1, 2017, under President Donald J. Trump. His tenure was marked by clashes with the Trump administration, leading to his dismissal from the post on March 13, 2018. Tillerson previously served as CEO and chairman of ExxonMobil from 2006 to 2016. His entire career was spent at this company, making him the first secretary of state with no prior experience in the government or military.

What Is Rex Tillerson's Net Worth?

Tillerson rose from modest beginnings to accumulate an estimated $300 million fortune during his career. At the end of 2016 he left ExxonMobil with a retirement package of $180 million; the equivalent cash value of his unpaid stock was placed into an independent trust so as to avoid conflicts of interest.

Among the pressing issues Tillerson had to cope with in his tenure as secretary of state were a nuclear-armed North Korea, trade concerns with China and questions about Iran's compliance with an agreement to freeze its nuclear program. Yet he faced all of these issues with a smaller diplomatic corps than his predecessors.

When Tillerson took the reins, he wanted to "redesign" the State Department. His goal was to eliminate personnel overlaps and bureaucratic deadwood, something many in the department initially welcomed. However, critics contended that U.S. diplomacy was being undermined, in large part due to a loss of personnel with specialized knowledge.

As Tillerson intended to achieve an eight percent reduction in full-time staff, many openings that resulted from resignations, retirement and attrition were left unfilled. Buyouts were also offered to encourage departures. Fewer new Foreign Service members were hired (interest in taking the Foreign Service exam also dropped, with 50 percent fewer registrants in 2017 as opposed to 2015).

Tillerson supported a proposed White House budget that cut funding for his department by 30 percent, which would have impacted both diplomacy and foreign aid. However, Congress disliked the steep cuts and okayed a $51 billion budget in the 2018 appropriations bill, $11 billion more than the administration requested.

In March 2018, Tillerson again called out China ahead of his first formal visit to Africa as secretary of state, accusing the Asian power of forging corrupt deals and endangering natural resources in Africa. He also announced a $533 million humanitarian aid package to help people affected by food shortages and conflict in Somalia, South Sudan, Ethiopia and the Lake Chad Basin, part of the overall plan of encouraging counterterrorism activity, democracy, governance, trade and investment.

On March 13, 2018, Tillerson's run as secretary of state abruptly ended when President Trump announced via Twitter that he was naming CIA Director Mike Pompeo to the post, with Gina Haspel to become the first woman to head the CIA.

Tillerson did not immediately comment, leaving the response to a statement from a State Department official. "The Secretary had every intention of staying because of the critical progress made in national security," said the statement. "He will miss his colleagues at the the Department of State and the foreign ministers he has worked with throughout the world."

Tillerson didn't associate with Trump before the election, and his selection for secretary of state in December 2016 came as a surprise. The then president-elect had been considering picks such as 2012 Republican presidential nominee Mitt Romney and Rudy Giuliani, the former New York City mayor. Tillerson's name was thrown in the ring when former Defense Secretary Robert Gates suggested it to Trump (supported by former Secretary of State Condoleezza Rice).

Another reason Tillerson may have edged out other candidates is his height. Senator Bob Corker had also been thought of for the position, but apparently Trump believed the senator wasn't tall enough (reportedly, Tillerson is 5-foot-10 while Corker stands at 5-foot-7).

Though Trump initially liked Tillerson's style, their working relationship was not a smooth one. On October 1, 2017, Trump tweeted that Tillerson was "wasting his time trying to negotiate with Little Rocket Man" (a reference to North Korean leader Kim Jong-un). And when Tillerson was trying to mediate a dispute between Qatar and its neighbors, the president accused Qatar of funding terrorism.

Tillerson said "the president speaks for himself" when asked about Trump's refusal to condemn white nationalists after violence broke out at a rally in Charlottesville, Virginia, in August 2017. And a report appeared in October 2017 saying Tillerson had called Trump a "moron" earlier in the year; after this the secretary gave a press conference lauding the president.

In March 2018, a series of leaked emails from the account of a prominent Trump fundraiser named Elliott Broidy revealed evidence of a lobbying effort to get the president to fire his embattled secretary of state. A businessman with interests in the Persian Gulf region, Broidy reportedly was angry that Tillerson did not support the United Arab Emirates in its dispute with Qatar the previous summer.

Tillerson served as CEO and chairman of ExxonMobil from 2006 to 2016. This put him in charge of a company with around 80,000 employees and annual revenues of $400 billion. He started there as a production engineer in 1975, after graduating college.

Tillerson thrived in Exxon's corporate culture and ended up in charge of overseas operations, which were driven by the pressing need for new oil reserves. To protect the company's investments, Tillerson had to evaluate global conditions in countries as diverse as Venezuela, Nigeria and Iraq. He received assistance in this from the International Government Relations Group at Exxon, whose staff included former State Department employees.

Exxon has a mandatory retirement age of 65, so Tillerson was already preparing to step down when he was nominated to be secretary of state.

Tillerson worked with Vladimir Putin in the 1990s, thanks to an Exxon project on Russia's Sakhalin Island. In 2011, Tillerson had ExxonMobil enter into a deal with Russian oil company Rosneft. Putin, apparently pleased by the deal, awarded Tillerson membership in Russia's Order of Friendship in 2013.

The 2011 agreement could have been worth up to $500 billion, but was put on hold by U.S. sanctions imposed after Russia invaded Crimea in 2014. In 2017, the Treasury Department fined Exxon $2 million for violating these sanctions in 2014, a decision the company is challenging.

Some officials were worried about Tillerson's connections to Russia from his years at ExxonMobil, and several senators asked questions about these ties during Tillerson's confirmation hearing. In the end he was confirmed, but 43 senators voted against him.

In the fall of 2017, Tillerson eliminated the Coordinator for Sanctions Policy office, moving responsibility for sanctions to the Policy Planning Office. The decision was part of his reorganization plan, but it delayed the implementation of sanctions issued for Russia's interference in the 2016 election. It also took several months for Tillerson to request already allocated funds for the Global Engagement Center, a group meant to fight propaganda and disinformation from both terrorists and malicious state actors (Tillerson's view was that he first wanted to ensure the funds would be used effectively).

After Tillerson became head of ExxonMobil, the company began to accept and acknowledge the scientific consensus that the climate is changing. However, Tillerson continued to voice doubts about the immediate need to cut oil and gas use to address the issue, arguing that society would be able to adapt to a changing climate.

However, Tillerson did support the Paris Agreement on climate change, an international pact to limit greenhouse gas emissions. He could not prevent President Trump from opting to withdraw from the accord in June 2017, though in September Tillerson noted the White House might be open to staying "under the right conditions."

An investigation into whether ExxonMobil deceived shareholders regarding its knowledge of the impact of fossil fuels on climate change is being conducted by the attorney generals of New York and Massachusetts.

Tillerson's first wife was Jamie Lee Henry, a high school bandmate. They married after Tillerson had graduated college, and had twin boys before divorcing.

By 1983 Tillerson had married Renda House, who had a child of her own. The couple had another son together in 1988.

It was Renda who advised Tillerson to become secretary of state. "I didn’t want this job. I didn’t seek this job," Tillerson admitted in a March 2017 interview with the Independent Journal Review. "My wife told me I’m supposed to do this."

When and Where Was Rex Tillerson Born?

Tillerson — the second of three children — spent his childhood in Texas and Oklahoma, moving between small towns with his family. His father left a job selling bread to be a professional organizer for the Boy Scouts of America; Tillerson became a dedicated member of the organization who attained the rank of Eagle Scout.

Like his father, Tillerson stayed connected to scouting as an adult. In addition to joining the boards of the national and Dallas chapters, he served as national president of the Boy Scouts of America from 2010 to 2012. In this role Tillerson supported the inclusion of gay scouts.

Tillerson graduated from Huntsville High in Texas and went on to the University of Texas at Austin. There, he studied civil engineering and played in the Longhorn marching band.

Where Does Rex Tillerson Live?

As an adult, Tillerson's home base remained in Texas. His property includes Bar RR Ranches, with "RR" standing for Rex and Renda.

With his government appointment, Tillerson purchased a home in the Kalorama neighborhood of Washington, D.C. However, he regularly leaves D.C. to return to Texas or visit his parents in Colorado.

At Exxon Tillerson was able to climb the ranks until he was the one giving orders. Accumulating merit badges as a Boy Scout was another organized endeavor. But in his government role, Tillerson encountered difficulties in coping with a chaotic Trump administration and criticism for not being accessible enough to the press.

"It is a lot different than being C.E.O. of Exxon because I was the ultimate decision-maker," Tillerson admitted to reporters in the summer of 2017. "That always makes life easier."