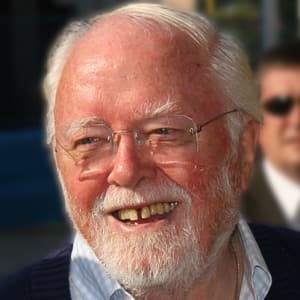 Richard Attenborough was an award-winning actor and director known for helming acclaimed works like Gandhi and Cry Freedom.

Born on August 29, 1923, in Cambridge, England, Richard Attenborough went on to pursue an acting career, known for British military dramas and the American POW film The Great Escape. He won several awards in the 1960s and made his film directorial debut with the satirical Oh! What a Lovely War. He eventually went on to direct the masterpiece Gandhi, for which he won Academy Awards for best director and picture. In recent years, Attenborough continued his acting work and directed other films, including Cry Freedom, Chaplin and Shadowlands. He died on August 24, 2014 at the age of 90.

Richard Samuel Attenborough was born on August 29, 1923, in Cambridge, England. His mother Mary was a writer who was involved in socially progressive work, and his father Frederick was a scholar and college principal. One of his two younger brothers, David Attenborough, would become a noted naturalist; his other brother John, would become an executive at Alfa Romeo. When he was fifteen, Richard's parents also adopted two German girls of Jewish descent, Helga and Irene Bejach, during World War II.

Richard Attenborough developed a passion for acting and performance as a youth, with his father encouraging him to pursue theatrical work if he could dedicate himself to the craft. He attended the Royal Academy of Dramatic Arts, earning the Leverhulme Scholarship. It was at the Royal Academy that he met his future wife, Sheila Sim.

Attenborough made his professional stage debut in the early 1940s, in a production of Ah Wilderness!. He then had his big-screen debut in 1943, playing a young sailor in the military drama In Which We Serve.

Attenborough served in the Royal Air Force before returning to film, particularly gaining notice for his role in 1947's Brighton Rock. Many roles followed, including those in The Guinea Pig (1948), Morning Departure (1950) and Hell Is Sold Out (1951). He especially became known for his work in various military dramas.

During the 1960s, Attenborough earned attention in the United States as part of the ensemble cast of the POW film The Great Escape (1963). Soon after, he won a British Film Academy Award for his performance in Séance on a Wet Afternoon (1964). He won Golden Globe Awards for supporting actor roles during this period as well, for the films The Sand Pebbles (1966) and Doctor Dolittle (1967).

In 1969, Attenborough made his big-screen directorial debut with the musical Oh! What a Lovely War, which critiqued the loss of life and military maneuvering of World War I. The film starred several prominent British thespians, including Maggie Smith, Vanessa Redgrave and Laurence Olivier, and earned a Golden Globe in the foreign film category.

Making some onscreen film appearances in the early 1970s, Attenborough then directed a biopic on Winston Churchill, Young Winston (1972), and followed that up by helming the 1977 World War II drama A Bridge Too Far.

In 1982 came the masterpiece that has perhaps defined Attenborough's career: He directed Gandhi, an epic film that chronicled the life of the pacifist leader Mahatma Gandhi, with Ben Kingsley in the lead role. The work, known for stunning scenes of visual beauty, earned eight Academy Awards, including for best director and best picture.

Attenborough went on to direct a film version of the musical The Chorus Line (1985) and helm the acclaimed work Cry Freedom (1987), which looks at the murder of South-African anti-apartheid activist Steve Biko and journalist Don Woods's quest to expose the killing. He continued to pursue directing work with the biopics Chaplin (1992) and Shadowlands (1993), the latter of which focuses on the romance between writers C.S. Lewis and Joy Gresham.

Attenborough returned to acting in his later years, playing Kriss Kringle in the 1994 remake of Miracle on 34th Street, and continued to perform onscreen in a number of projects, including Hamlet (1996), Elizabeth (1998) and the first two Jurassic Park films (1995 and 1997). Also around this time, he directed the films In Love and War (1996) and Grey Owl (1999).

Attenborough and his family suffered a great personal loss in 2004, when his daughter, Jane, and granddaughter, Lucy, were killed in the Indian Ocean tsunami the day after Christmas. He spoke openly about his grief and never celebrated the holidays after their deaths.

Richard Attenborough directed the Shirley MacLaine film Closing the Ring (2007), and penned with friend Diana Hawkins the 2008 autobiography Entirely Up to You, Darling, a phrase used by his mother.