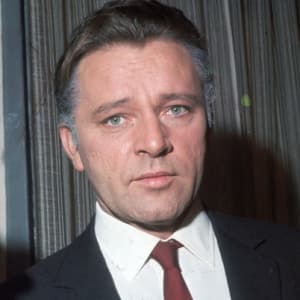 Richard Burton was a highly regarded Welsh actor of stage and screen. He earned seven Oscar nominations and was married twice to actress Elizabeth Taylor.

Born on November 10, 1925, in Pontrhydfen, South Wales, Richard Burton went on to become an acclaimed actor of stage and screen. He earned seven Oscar nominations for work like The Robe, Who's Afraid of Virginia Woolf?, Becket and Equus. He wed Hollywood icon Elizabeth Taylor in 1964, and the two maintained a volatile relationship for years to come that included remarriage and two divorces. Burton died in Céligny, Switzerland, on August 5, 1984.

The man who would become actor Richard Burton was born Richard Walter Jenkins on November 10, 1925 in Pontrhydfen, South Wales. Jenkins, the twelfth child of an impoverished coalminer, lost his mother when he was two years old. He would be taken under the wing of Philip Burton, a teacher who became the boy’s guardian and introduced him to the world of theater.

Jenkins took the Burton surname and made his London acting debut as a Welsh youngster in the play The Druid’s Rest. Burton earned a scholarship to attend Oxford University and later joined the British air force during war time.

A Thrilling Force on Stage

After leaving the military in 1947, he continued his stage work and became known for his remarkable voice and oration, appearing in The Lady’s Not for Burning with Sir John Gielgud. Burton then made his film debut in 1949 with the production The Last Days of Dolwyn. The same year he wed actress Sybil Williams; the couple would eventually have two daughters.

Though met with varying degrees of commercial and critical regard over the course of his career, Burton went on to work in more than 40 films. He entered into a contract with Fox studios after Dolwyn, and starred in My Cousin Rachel (1952), for which he earned his first Academy Award nomination, in this case for supporting actor. The 1953 biblical story The Robe followed, for which he received an Oscar nod for best actor. He also had the title role in the epic Alexander the Great (1956) and the British protest film Look Back in Anger (1959).

Burton had continued his stage performances during this period as well, working with the Old Vic and Royal Shakespeare companies in Britain and earning acclaim for his work on Broadway in 1960’s Camelot.

In the early 1960s, Burton met actress Elizabeth Taylor on the set of the multimillion dollar epic Cleopatra (1963), for which he was hired to replace actor Stephen Boyd. Taylor said that Burton was recovering from a hangover. Because he was unable to steady his trembling hands, she held his coffee to his lips and their eyes locked. Though each was married at the time, the two embarked on a relationship that was met with scorn from traditional institutions that included the Vatican. The couple’s romantic tribulations and luxury-item escapades would be covered in tabloid news for years to come.

After Burton and Taylor divorced their respective spouses, the couple wed on March 15, 1964. They went on to work in 11 films together, including screen adaptations of Who’s Afraid of Virginia Woolf? (1966) and The Taming of the Shrew (1967). Woolf earned both actors Oscar nominations, for which Taylor won. The couple earned millions for their film roles.

During this period, Burton appeared once again on Broadway in a 1964 staging of Hamlet directed by Gielgud and continued to maintain distinctive projects, garnering additional lead actor Oscar nominations for in Becket (1964), The Spy Who Came in From the Cold (1965) and Anne of the Thousand Days (1969).

Burton continued to drink heavily. His marriage to Taylor was noted for its volatility and storminess, with both performers battling substance addictions. The two were estranged in 1970 and would divorce in 1974. They then reconciled and remarried in the fall of 1975 in Botswana, only to divorce again the following year. Burton would marry model Suzy Hunt in 1976.

Burton continued to make films in the '70s, including Villain (1971), Brief Encounter (1975) and Exorcist II: The Heretic (1977), and was nominated for his seventh Oscar for his role as a psychiatrist in the 1977 drama Equus.

In 1980, Burton returned to the New York stage in a revival of Camelot, though his performance would later be curtailed due to the effects of medication for spinal pain; he would leave the play to have surgery. Then, in 1983, he and Taylor returned to working together for the Noel Coward theatrical work Private Lives.

Burton's final film was 1984, an adaptation of the George Orwell classic. Burton died on August 5, 1984, at the age of 58, from a brain hemorrhage in his Céligny, Switzerland home. He was survived by Sally Hay Burton, his fourth wife, who has continued to manage the estate. Burton also had four children. He had two daughters Kate and Jessica, from his marriage to Sybil Christopher. Burton later adopted Elizabeth Taylor's daughter Elizabeth "Liza" Todd, and he and Taylor adopted another daughter, Maria, together.

Several books have chronicled Burton's life, including The Richard Burton Diaries, published in 2012, which collects journal entries and notes kept by the actor throughout the years.