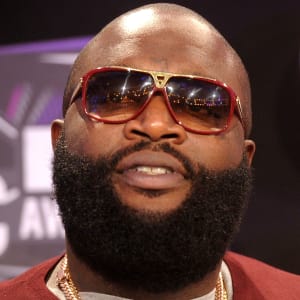 Rick Ross is a rapper and entrepreneur who was the first artist signed to P. Diddy’s Ciroc Entertainment. Despite his legal troubles and infamous rivalry with 50 Cent, Ross is a respected and prolific artist. He founded his own music label, Maybach Music Group, in 2009.

Who Is Rick Ross?

Rick Ross is a rapper and label boss from Mississippi who has received Grammy nominations but also had his background called into question. He's had his fair share of legal tussles, as well as the obligatory rap beef (with 50 Cent). He remains a prolific artist, both as a solo performer and as a guest, and his Maybach Music Group has put out albums by artists including Wale, Meek Mill, French Montana and Teedra Moses. While a controversial figure, Ross is held in high esteem within the music industry, signing deals with P. Diddy and earning praise from Pharrell.

The Creation of Rick Ross

Ross was born William Leonard Roberts II in Coahoma County, Mississippi, on January 28, 1976. Raised in Carol City, Florida — an impoverished area of north of Miami — Ross gravitated to the music of street-oriented rappers like Tupac Shakur, Notorious BIG, Luther Campbell and Ice Cube. Although he attended Georgia's Albany State University on a football scholarship for a year, Ross started writing rap lyrics that romanticized drug dealing, an act that he saw as a child.

He took his performing name from stories he heard of a drug trafficker named "Freeway" Rick Ross. Ironically, Ross worked as a corrections officer in Florida for almost two years (something he initially denied when it was revealed, but later accepted), but the lure of hip-hop music and the lavish lifestyle of the drug dealers he saw throughout his youth led him in another direction.

While he appeared as a guest on several labelmates’ projects, his only solo release would be the promo-only single "Just Chillin'" in 2003. The CEO of Slip-N-Slide, Ted Lucas, would later praise Ross’ solo breakthrough, which happened after he left the label: “I never doubted him musically and lyrically. Ross is an incredible rapper.”

The first proper single from Ross, "Hustlin'," became a smash hit, due to the hypnotic line, "every day I'm hustling," repeated throughout. The single was eventually certified gold, an impressive feat for a brand-new recording artist. It sparked a bidding war with Def Jam Records, headed by Jay Z, winning the battle and signing Ross to a highly publicized record deal. The song’s official remix had verses from Young Jeezy and Jay Z, while an unofficial version also included Lil Wayne, TI and Busta Rhymes.

Ross debuted at No. 1 on the Billboard Top 200 Albums chart with his 2006 debut, Port of Miami. His sophomore album in 2008, Trilla – named after Michael Jackson’s Thriller, combined with the Southern slang term "trill" – also debuted at No. 1. Following his success, Ross began to tour extensively and to collaborate with popular acts including R. Kelly, Flo-Rida, Nelly and T-Pain. His third album, Deeper Than Rap (2009), reinforced his success, with The New York Times praising it as “unexpectedly fantastic, by far his best. Few rap albums have sounded this assured, this sumptuous, in years.”

In the same year, Ross launched Maybach Music Group (MMG). The label would achieve great success, releasing albums by Meek Mill, Wale and Omarion. Appearances by Ross and his signings on other artists' tracks would almost always be accompanied by a "Maybach Music" drop — a vocal tagline by the supermodel Jessica Gomes.

Running a label didn’t appear to slow down Ross’ personal output. Teflon Don in 2010 was followed by the MMG compilation Self Made Vol. 1 a year later, and then by God Forgives, I Don’t in 2012. During this time he worked with Kanye West, Gucci Mane, CeeLo Green, Drake, Dr. Dre and Andre 3000.

God Forgives was nominated for a best-album Grammy in 2013, and he followed with Mastermind and Hood Billionaire, both in 2014, but reviews were mixed and sales only modest — perhaps a sign that he was releasing too much music too quickly, diluting the quality. Album No. 8, Black Market, came out at the close of 2015. His ninth, Rather You Than Me, dropped in 2017.

As Ross' notoriety grew, thanks to his lyrics about drug dealing and hustling, his past career in law enforcement began to interest the public, too. It was an intriguing contradiction that first came to light in 2008, when a website known as The Smoking Gun exposed Ross as having previously worked as a corrections officer in South Florida. Although this raised doubts about Ross' street credibility, the rapper brushed them aside.

He has had other issues to deal with, including facing charges for weapons, drugs, kidnapping and assault. He spent a large part of 2015 under house arrest. The original “Freeway” Ricky Ross attempted to sue Ross for using his name in 2010, but it was thrown out of court.

Then there was a feud with fellow rapper 50 Cent, which began in 2008. By the following year, Fiddy has taken to calling Ross "Officer Ricky" as the two rappers dissed each other over a series of records. The beef turned uglier still when Fiddy released a sex tape featuring Lastonia Leviston, the mother of one of Rick Ross’ children. The eventual court case, which Leviston would win, would be partly responsible for 50 Cent’s bankruptcy.

Having grown up in Miami, Ross is said to be a fan of the 1980s television cop show Miami Vice. Two of his trademarks that are often attributed to the influence of the show are his large, dark sunglasses and his slow, raspy vocal delivery.

The father of three children, Ross endured a health scare in 2011 when he suffered multiple seizures on two separate flights on the same day. In March 2018, TMZ reported that the rapper had been hospitalized and hooked up to life support upon being found unresponsive at his home, before earning his discharge a few days later. However, his family disputed that account of events, suggesting that Ross's condition wasn't as bad as initially believed.