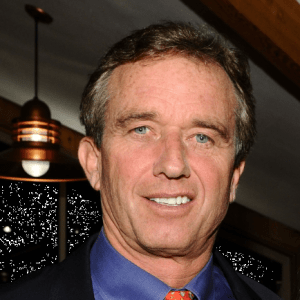 Robert F. Kennedy, Jr. is an attorney, a vocal environmental activist and radio host. He is co-founder and President of River Alliance.

Born on January 17, 1954, in Washington, D.C., Robert Francis Kennedy Jr.—the son of former New York senator and U.S. attorney general Robert F. Kennedy and nephew of former President John F. Kennedy—is an attorney, environmental activist and syndicated talk radio host. He is a co-founder and President of Waterkeeper Alliance, an environmental protection organization focused on the preservation and conservation of water resources. In addition to writing on environmental issues for numerous publications, he currently serves as senior attorney for the Natural Resources Defense Council. In 2014, he married actress Cheryl Hines.

After graduating from Millbrook Academy in Gloucestershire, England, Kennedy attended Harvard University and the London School of Ethics, receiving a bachelor's degree in American history and literature in 1976. He went on to obtain doctorate and master's degrees in law from the University of Virgina and Pace University, respectively. In 1983 he served as the assistant for district attorney of New York and that summer passed his bar examination after his second attempt. He was disbarred after he was discovered possessing heroine at a South Dakota airport. He was charged with a felony and pleaded guilty.

As part of his sentencing, he began doing community service for Riverkeeper, a nonprofit organization dedicated to preserving the Hudson River. He became so involved at the nonprofit that after he finished his 1500 hours of community service, he was hired as its chief attorney. (He was reinstated to practice law in 1985.)

In 1998, Kennedy co-founded a bottled water company, Tear of the Clouds LLC, with Chris Bartle and John Hoving. A year later he founded Waterkeeper Alliance, a global umbrella group which supports local environmental organizations protect their respective bodies of water. In 2004, he became a co-host—along with Mike Papantonio and Sam Seder—of Ring of Fire, a syndicated U.S. talk radio show that focuses on American politics.

In the mid-2000s, Kennedy's work centered on advocating for renewable energy development and encouraging citizens to protect their local waterways. In May of 2010, he was named a "Hero for the Planet" by Time.com for his work with Riverkeeper, helping to restore the Hudson River. Kennedy's environmental activism also includes writing two books and numerous articles on issues affecting the environment. He currently serves as senior attorney for the Natural Resources Defense Council.

In 2016, he joined thousands of concerned citizens and Native Americans from numerous tribes at the Standing Rock Sioux Reservation, in protest of the Dakota Access Pipeline. He also denounced the use of militarized police against the peaceful protesters. “Today, we stand in solidarity with the people of Standing Rock and commend the Sioux Nation for taking on this courageous fight on behalf of our country, humanity, and democracy,” said Kennedy. “Across the nation, communities of color face environmental and public health threats most communities don’t have to think about. This historic peaceful protest declares that all communities deserve clean water.”

Kennedy is known for his controversial views on the link between vaccinations and autism. He has been vocal against including the preservative thimerosal in vaccines, believing there is a government cover-up on its damaging effects on children. In April 2015 he helped promote a film called Trace Amounts, which supports his views.

Kennedy married Emily Ruth Black in 1982, and nearly one year later, he was arrested for heroin possession at a Rapid City, South Dakota, airport. Police reportedly found 183 milligrams of heroin in his luggage. Kennedy pleaded guilty and was sentenced to two years' probation, drug testing and treatment, and several hours of community service. Not long after, the charge was expunged from his record.

Kennedy and Emily had two children, Robert and Kathleen, before divorcing in March 1994. Less than one month later, Kennedy married Mary Richardson during a ceremony that was held aboard a ship on the Hudson River. They had four children, Conor, Kyra, William and Aiden. On May 12, 2010, Kennedy filed for divorce from Mary Kennedy, and shortly after, she was arrested for drunk driving on two separate occasions. Mary Kennedy was found dead in her home on May 16, 2012, and it was later determined that she had died of asphyxiation due to hanging.

Kennedy began dating actress Cheryl Hines in 2010 and the couple married on August 2, 2014. The actress has a daughter from a previous marriage.