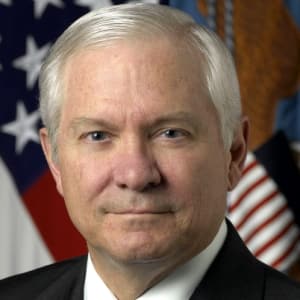 Robert Gates served as director of the CIA under George H.W. Bush before serving as secretary of defense under presidents George W. Bush and Barack Obama.

Born on September 25, 1943, in Wichita, Kansas, Robert Gates served in the air force before joining the CIA and, later, the National Security Council. Gates was appointed head of the CIA by George H.W. Bush and became secretary of defense under George W. Bush and Barack Obama, dealing with the conflict in Iraq. He supported overturning the policy of Don't Ask, Don't Tell before retiring in 2011.

Government official Robert Michael Gates was born on September 25, 1943, in Wichita, Kansas, and served as director of the Central Intelligence Agency from 1991 to 1993, and as secretary of defense (2006-2011) in the administrations of presidents George W. Bush and Barack Obama, respectively.

Gates studied European history at the College of William and Mary in Williamsburg, Virginia, receiving a bachelor's degree in 1965. While earning a master's degree from Indiana University in 1966, he was recruited by the CIA, and joined the agency full-time as a Soviet analyst after a two-year stint in the U.S. Air Force. Gates later received a doctorate (1974) in Russian and Soviet history from Georgetown University in Washington, D.C.

In 1974, Gates joined the staff of the National Security Council, serving under presidents Richard Nixon, Gerald Ford and Jimmy Carter until 1979, when he returned to the CIA. He rose to the post of deputy director of the agency in 1982, and President Ronald Reagan nominated him director in 1987. Gates, however, withdrew amidst questions regarding how much he knew about the Iran-Contra Affair.

Gates later served as deputy national security adviser (1989-1991) to President George H.W. Bush, and Bush nominated Gates director of the CIA again in 1991. This time, Gates had to defend himself against accusations that he had deliberately distorted intelligence information about the Soviet Union he'd presented to the Reagan Administration. The Senate confirmed Gates in a 61-31 vote, making him the youngest director in the agency's history.

His tenure ended little more than a year later, after Bill Clinton defeated George H.W. Bush in the 1992 presidential election. Gates's memoir, From the Shadows: The Ultimate Insider's Story of Five Presidents and How They Won the Cold War, was published in 1996. In 1999, Gates was named dean of the George Bush School of Government and Public Service at Texas A&M University. Three years later, he became president of the university.

In 2006, Robert Gates was appointed secretary of defense by President George W. Bush to replace Donald Rumsfeld, who resigned after heavy Republican losses in midterm elections were interpreted as a national referendum on the Bush Administration's handling of the Iraq War. Considered the opposite of Rumsfeld, who was seen as an ideologue bent on making the Pentagon do his bidding, Gates had a reputation as a pragmatist who could assess a situation and respond accordingly. He was easily confirmed by the Senate in a 95-2 vote.

In November 2008, it was rumored that newly elected President Barack Obama would keep Gates as secretary of defense for yet another term. On December 1, 2008, President Obama officially declared that Gates would continue to be part of the presidential cabinet in 2009.

While serving in the Obama Administration, Gates supported overturning the policy of Don't Ask, Don't Tell. He officially retired as secretary of defense in July 2, 2011. During his farewell ceremony on June 30, 2011, President Obama presented Gates with the Presidential Medal of Freedom, the United States' highest civilian honor, and called Gates "one of the nation's finest public servants," who "challenged conventional wisdom" and ultimately reduced unnecessary spending in the U.S. military by hundreds of billions.

After retiring, Gates released his memoir, Duty: Memoirs of a Secretary at War, on January 14, 2014. The memoir drew attention based on its criticism of the Obama administration, although he criticizes the Bush administration as well. Within the tell-all book, he explains that Obama had reservations about the military's role in Afghanistan. "I never doubted Obama's support for the troops, only his support for their mission," he says. The content of the memoir came as a surprise to many who previously saw Gates as leading example as a modern bi-partisan leader.