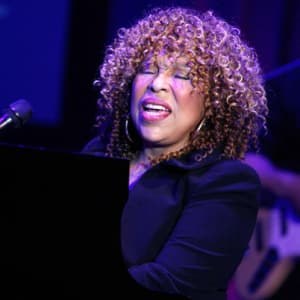 Roberta Flack is a Grammy-winning singer and pianist known for hits like “The First Time Ever I Saw Your Face” and “Feel Like Makin’ Love.”

Roberta Flack was born on February 10, 1937, in Asheville, North Carolina, and signed to Atlantic Records before releasing her debut album First Take. She's had hits in the ‘70s-‘90s, including “Killing Me Softly With His Song,” “The First Time Ever I Saw Your Face” and “Where Is the Love,” and she collaborated frequently with soul legend Donny Hathaway. Flack has also won several Grammys.

Born on February 10, 1937, in Black Mountain, North Carolina, Roberta Flack is the daughter of a church organist. She began taking piano lessons at an early age and eventually received a music scholarship to Howard University. After graduation, she taught music and sang in clubs, where she was discovered by jazz musician Les McCann who helped her land a record deal with Atlantic.

Flack's first two albums were well received, but it wasn't until her version of Ewan MacColl's "The First Time Ever I Saw Your Face" hit the radio waves as part of the soundtrack for Play Misty for Me that she gained national recognition. The song soared to be the number one hit for 1972, and Flack followed with several other chart-topping duets with Howard classmate Donny Hathaway, including "Where Is the Love," "Killing Me Softly with His Song" and "Feel Like Makin' Love."

During the late 1970s, Flack took a break from performing to concentrate on recording and charitable causes. In 1979, tragedy struck when Hathaway committed suicide, and she was forced to find another partner. Eventually teaming up and touring with Peabo Bryson in 1980, the duo scored a hit in 1983 with "Tonight, I Celebrate My Love." She spent the remainder of the 1980s touring and performing, and returned to the Top Ten once more in 1991 with "Set the Night to Music," a duet with Maxi Priest. In 1997, Flack released an anthology of Christmas standards simply titled Christmas Album.