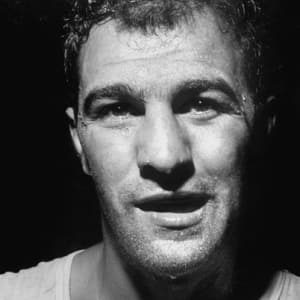 Rocky Marciano was born on September 1, 1923, in Brockton, Massachusetts. He started fighting as a professional boxer in 1948, winning a fight against Harry Bilizarian. He then went on to win his first 16 fights. In 1952, he beat Jersey Joe Walcott for the world heavyweight championship. Marciano defended his title six times. He retired in 1956 and died on August 31, 1969, near Newton, Iowa.

American professional boxer and world heavyweight champion Rocky Marciano was born as Rocco Francis Marchegianon on September 1, 1923 in Brockton, Massachusetts, to Italian immigrants Pierino Marchegiano and Pasqualina Picciuto. Marciano and his three sisters and two brothers lived across the street from the James Edgar Playground, where Marciano spent countless hours playing baseball. At a young age, he worked out on homemade weights and did chin-ups until he "was totally fatigued."

Marciano attended Brockton High School and played baseball and football, but got cut from the varsity baseball team when he violated rules by joining a church league. He dropped out of school in the 10th grade and began jumping from job to job, one of which was a floor sweeper position at Brockton's shoe factory. In 1943, Marciano was drafted into the Army and sent to Wales, where he ferried supplies across the English Channel to Normandy. He completed his service in March 1946 at Fort Lewis, Washington.

While awaiting discharge, Marciano represented his unit at Fort Lewis in a series of amateur fights, winning the 1946 Amateur Armed Forces boxing tournament. In March 1947, he fought as a professional competitor, knocking out Lee Epperson in three rounds. Later that year, after trying out for the Chicago Cubs baseball team and being cut, Rocky returned to Brockton and began boxing training with longtime friend Allie Colombo.

Marciano began fighting as a professional boxer on July 12, 1948, winning a fight against Harry Bilizarian. He then went on to win his first sixteen fights by knockout, all before the fifth round, and nine of them before the end of the first round. During this time, a ring announcer in Rhode Island could not pronounce "Marchegiano," so Weill suggested that they create a pseudonym. "Marciano" was chosen.

On September 23, 1952, Marciano fought against Jersey Joe Walcott for the world heavyweight championship. He was knocked down in the first round, and was behind for the first seven, but won in the 13th round, knocking out Walcott with an accurate right punch. The punch was later referred to as his "Susie Q."

Marciano went on to defend his title six times, winning five by knockout. His last title fight was against Archie Moore, on September 21, 1955, where he knocked out Moore in the ninth round. Marciano announced his retirement on April 27, 1956. During his career, he won an unrivaled 49 straight fights, 43 of which were by knockout.

Marciano met Barbara Cousins, the daughter of a retired Brockton police sergeant, in the spring of 1947. They married on December 31, 1950. They had one daughter, Mary Ann, and adopted a son, Rocco Kevin.

After boxing, in 1961, Marciano hosted a weekly boxing show on TV. He also worked as a referee and boxing commentator in boxing matches for many years. On August 31, 1969, the eve of his 46th birthday, Marciano was killed in a tragic plane crash. Five years later, Barbara succumbed to lung cancer at age 46.