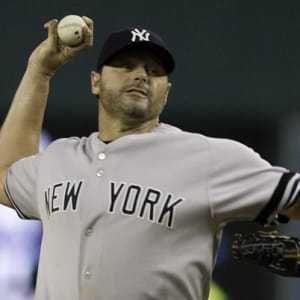 Roger Clemens was born on August 4, 1962, in Dayton, Ohio. In 1983, he joined the Red Sox. In 1986, he achieved a 24-4 record, earned the Cy Young Award and was named Most Valuable Player. In 2004, after stepping out of retirement, he pitched for the Astros. Over the next three years, he led the club to its first-ever World Series. He returned to the New York Yankees in 2007 for his final season.

One of the most dominating pitchers in Major League Baseball history, William Roger Clemens was born on August 4, 1962 in Dayton, Ohio. The youngest child born to Bess and Bill Clemens, Roger was just 2 years old when his mother packed up her kids and left an unhappy marriage.

Shortly thereafter, Clemens's mother married second husband Woody Booher, a tool- and die-maker who stepped in to play the father role for Roger. But Booher's health was unstable, and in 1970, he died from a massive heart attack. It was just one of many obstacles thrown at the young Clemens. For a period of six years, beginning at the age of 7, Clemens attended six different schools in three cities.

Desperate for some stability, in the middle of his freshman year of high school, he moved to Houston to live with his older brother, Randy Clemens. From a young age, Clemens showed the kind of physical drive that he would carry throughout his professional baseball career. He worked out constantly, sticking to a strict regimen of weightlifting, calisthenics and running that he'd devised himself.

"I had certain rules to follow when I was young, and discipline just became a habit," he told Sports Illustrated in 1988. "I always wanted to be strong—not just mentally, but physically."

At Spring Woods High School, Clemens was good enough to be the team's number two pitcher, but went undrafted upon graduating in 1980. That fall, he enrolled at San Jacinto Junior Community College and showed enough improvement that, in 1981, he was drafted by the New York Mets. Clemens, however, spurned the team's $30,000 contract offer and enrolled at the University of Texas, where he spent two seasons and led the team to the NCAA title. In 1983, the Boston Red Sox selected Clemens in the first round.

After taking just a year to reach the big leagues, Clemens experienced a trying first couple of years in Boston that were slowed by injuries and tough losses. In 1986, however, everything came together for the young pitcher, as he assembled a 24-4 record, earned the Cy Young Award and was named Most Valuable Player, a rare accomplishment. It was the start of a period of dominance for Clemens that would see him win two more Cy Young Awards, in 1987 and 1991, respectively, while playing with the Red Sox.

Following the 1996 season, Clemens, who was perceived to be out of shape and close to the end of his career, left Boston via free agency for a lucrative deal with the Toronto Blue Jays. In his first year with Toronto, a newly rejuvenated Clemens once again dominated opponents, finishing the season with an American League best of 21 wins and his fourth Cy Young Award.

After another mesmerizing season, in 1998—Clemens led the league in wins, strikeouts and ERA to earn a fifth Cy Young Award—Toronto traded Clemens to the New York Yankees. In 1999, he helped lead New York to a World Series win, the first title of his career. A second championship followed in 2000, as did his sixth Cy Young Award in 2001.

In 2004, after stepping out of retirement, Clemens pitched for his hometown Houston Astros. Over the next three years, he earned a seventh Cy Young Award, and led the club to its first-ever World Series appearance. Following another flirtation with retirement, Clemens returned to the New York Yankees in 2007, for what turned out to be his final season.

Throughout his long career, Clemens won 354 regular season games and recorded 4,672 strikeouts. Twice, in 1986 and 1996, he struck out 20 batters in a game—a statistic that no pitcher before him had achieved.

In December of 2007, Clemens was included in a much-publicized report on baseball's steroid use by former U.S. Senator George J. Mitchell. The report alleged that Clemens had taken banned substances in 1998, 2000 and 2001—charges that Clemens has vehemently denied. Most famously, Clemens went before Congress in 2008 and refuted any use of performance enhancement drugs.

However, as evidence pointing to Clemens's steroid use mounted—most notably by his former trainer, Brian McNamee—so did questions about his truthfulness. In 2010, Clemens was ensnared in more legal trouble, when he was indicted by a federal grand jury on charges of perjury and making false statements to Congress.

In July of 2011, Clemens received an unexpected victory: His perjury trial was thrown out on the first day of proceedings. The judge on the case, U.S. District Judge Reggie Walton, called a halt to the trial after prosecutors showed jurors evidence that he had already ruled out—a video of a teammate revealing he'd told his wife that Clemens had confessed to using a drug.

In April of 2012, a second perjury trial against Clemens began. The case included one charge of obstruction of Congress, three charges of making false statements and two charges of perjury, and if convicted of all six of his charges, Clemens faced a maximum sentence of up to 30 years in prison and a $1.5 million fine. This time around, however, the verdict was in favor of the former baseball star: Clemens was acquitted of all perjury charges in June 2012. His acquittal reignited talk about Clemens being a candidate for the Baseball Hall of Fame.

In August 2012, Clemens made his first television appearance since his June 2012 acquittal—on CBS This Morning—and spoke about his feelings on his candidacy for the Baseball Hall of fame. "It's not going to change my life either way," he said during an interview with Charlie Rose Thursday, co-host of This Morning. "The Hall of Fame is great. I've got a lot of great buddies there. The guys that are there paved the way for me to do what I love to do and make a lot of money doing it, take care of my family."

Clemens, coming out of a five-year retirement, was slated to pitch for the independent Atlantic League's Sugar Land Skeeters team later that month—leading media outlets to speculate that the famed player would make a comeback with the Houston Astros, returning for the 2013 season.