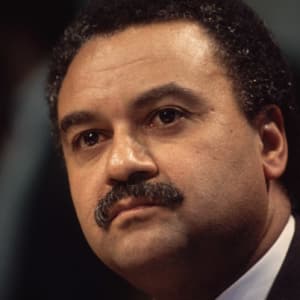 Ron Brown was a lawyer and Democratic politician who served as commerce secretary under the administration of President Bill Clinton.

Ronald H. Brown was born on August 1, 1941, in Washington, D.C. Defying racial barriers, he established a career in law and worked as a National Urban League lobbyist before becoming chairperson of the Democratic National Committee in 1989. In 1993, he became the secretary of commerce under the administration of President Bill Clinton. Brown was killed in a plane crash in the Balkans in 1996.

U.S. Secretary of Commerce Ronald Harmon Brown was born on August 1, 1941, in Washington, D.C. He was the first African American to serve as U.S. secretary of commerce. Raised in Harlem, New York, he lived across the street from the famed Apollo Theater in a hotel managed by his father.

Brown attended Vermont's Middlebury College. To help cover his costs, he worked part-time at the school. Brown was also a member of the college's track team. After graduating from Middlebury in 1962, he joined the U.S. Army and served for four years in South Korea and Germany. He soon started studying for his law degree from St. John's University at night. Former New York governor Mario Cuomo was one of his professors. To support himself, Brown took a position as a welfare caseworker for the City of New York. He also joined the National Urban League.

It was through his work for the National Urban League that Brown showed that he was a champion of civil rights. For many years, he served as deputy executive director, general counsel and vice president for Washington operations for the organization. He resigned his posts in 1979 to serve as a deputy campaign manager for Senator Edward M. Kennedy's Democratic presidential bid. He also served as chief counsel for the Senate Judiciary Committee under the chairmanship of Senator Kennedy. After working as a lawyer and lobbyist for the Washington, D.C., law firm Patton, Boggs & Blow in the 1980s, Brown was elected chairman of the Democratic National Committee in 1989.

Brown was a key player in Bill Clinton's successful bid for the presidency in 1992. The following year, Clinton picked Brown to become his secretary of commerce. He was the first African American to hold this title. During his tenure, Brown made it his mission to generate jobs and provide opportunities for ordinary Americans. He went on roughly 15 trips abroad to promote American business interests and to encourage American companies to invest in foreign countries. It was during one of these journeys that he lost his life.

On April 3, 1996, while on an official trade mission, Brown and 34 others were killed in an airplane crash in Croatia. He had been visiting the region with American executives to stir up U.S. investment there. He was survived by his wife Alma. The couple had been married since 1962 and had two children together, Michael and Tracey.

At the time, there was some speculation that the crash was not an accident. But these conspiracy theories were soon discounted. The official report found that the crash was due to a "failure of command, aircrew error and an improperly designed instrument approach procedure."

Following Brown's death, President Clinton established the Ron Brown Award for corporate leadership and responsibility. The U.S. Department of Commerce also presents the Ronald H. Brown American Innovator Award each year. A few years after his death, his daughter Tracey L. Brown Morrow paid tribute to him in prose with The Life and Times of Ron Brown (1998).

Famous Guests of the Hotel Theresa(TV-PG; 2:02)