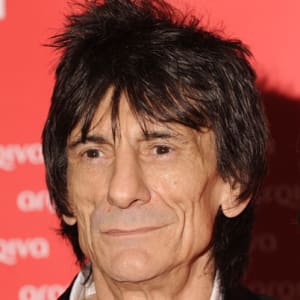 English rocker Ron Wood became the guitarist for the Rolling Stones in the mid-1970s, and is now a two-time Rock and Roll Hall of Fame inductee.

Ron Wood was born on June 1, 1947 in Hillingdon, London. He joined a number of English bands as a guitarist and bassist—most notably Faces and the Rolling Stones—and produced many hits during his career. Wood also produced solo albums and, as a gifted painter, held art exhibits throughout the United States and elsewhere. For his musical talents, Wood was inducted into the Rock and Roll Hall of Fame twice.

The achievements of British rocker Ronald David Wood have brought him a long way away from his humble roots. Born in Hillingdon, London, on June 1, 1947, Wood was the youngest of three boys. He started out as an artist, first displaying a talent for painting when he was 3 years old and eventually attending the Ealing School of Art in London as an undergrad. Wood's love of art was not unrivaled, though: He also had an affinity for creating music. At 17, he began his musical career with the Birds, a rhythm and blues band that was popular in the United Kingdom in the mid-1960s.

After the Birds disbanded in 1967, Wood joined the Jeff Beck Group as a bassist, along with vocalist Rod Stewart. He toured with the Beck band on several occasions and released two albums with them before parting ways. After Wood was fired from the Beck Group in 1969 (despite being rehired only weeks later), he and Stewart went on to join another English rock band, Faces (initially called "the Small Faces"). With their two newest members, Faces had major success, regularly touring the United Kingdom, other parts of Europe and the United States. The band was among the top-grossing live acts from 1970 to 1975.

According to an article published in Phonograph Record Magazine in June 1975, "Wood's career really began when he was fired from the Beck band, and unleashed a distinctive slide guitar on the first cut of Rod Stewart's first solo album."

During his final year with Faces, 1975, Wood began working with the Rolling Stones. Two years earlier, he had collaborated with Mick Jagger and Keith Richards, who contributed to his first solo album, I've Got My Own Album To Do. In 1974, Stones guitarist Mick Taylor departed, and several months later, Wood was brought in to participate in recording sessions for the group's upcoming album, Black and Blue. He also toured North America with the group. Faces disbanded in December 1975, and in February 1976, Wood became an official Rolling Stone.

Throughout his musical career, Wood released more than a dozen solo albums and was credited as a co-writer for an array of songs, including "Stay With Me" for Faces, and "It's Only Rock 'n' Roll (But I Like It)" for the Stones. In September 2010, when his album, I Feel Like Playing, was released, Wood spoke to Vanity Fair about the impetus for making solo albums. "Apart from keeping my chops intact between tours, I get to be the boss," he said. "When it's with the Stones, I'm working as a unit … But when it comes to a solo outing, the world is your oyster—provided that you have the material."

By 2012, Wood had his own show on Absolute Radio, and was nominated at the 2012 Sony Awards as the Music Radio Personality of the Year—an award he won in 2011. He was also displaying his art at various exhibits, including one named "Faces, Time and Places," which opened in New York City in April 2012 and ran for three months.

Other major events Wood celebrated in 2012 were his 65th birthday and the Rolling Stones's 50th anniversary, which he likened to "training for something big," according to The Associated Press. "It's like working out for the Olympics of something," he was quoted as saying. "You've got to go into training. So we're going to go into training."

Whether he performs solo or with the Stones, Wood makes waves. "Is there a more quintessential wrinkled old rocker than the 64-year-old Ronald David Wood?" So begins an article about the rocker published in February 2012, on The Independent's website. The article also calls Wood "rock's greatest survivor."

On Wood's 65th birthday (June 1) in 2012, the Toronto Sun published an article on its website that praised the musician and his effect on rock 'n' roll. "His iconic shock of black hair and hell-raising lifestyle set the benchmark for rock 'n' roll wannabes," read the article, "and continues to be an influence on budding musicians for generations to come."

The Rolling Stones made history on March 25, 2016, when they played a free concert to 500,000 people in Havana, Cuba, where their music previously had been banned by the country’s Communist regime for being subversive. The concert followed a historic visit from U.S. President Barack Obama just days prior, which was part of an effort to normalize U.S. relations with Cuba.

"We have performed in many special places during our long career, but this show in Havana will be a milestone for us, and, we hope, for all our friends in Cuba, too," the band said in a statement.

The show at Havana’s Ciudad Deportivo sports arena is the band’s first concert in Cuba and part of its 2016 South American tour.

Wood was married twice, first to Krissy Findlay, and then to Jo Karslake. He has three biological children: son Jesse with Findlay; and daughter Leah and son Tyrone with Karslake. Wood also raised Jamie, Karslake's son from a previous relationship. During his marriage to Findlay, Wood had an affair with Pattie Boyd, who was married to Beatle George Harrison at the time.

In July 2008, Wood ran off with an 18-year-old Russian cocktail waitress, Ekaterina Ivanova; the pair met at an escort bar at 4 a.m., when Wood was "boozed out of his mind," according to a Daily Mail article. Wood's affair with the young woman made headlines. In a statement to the Daily Mail, Wood's publicist spoke about the relationship: "She is a drinking partner. When you're an alcoholic and your family are all telling you to stop drinking, you simply find someone else to drink with … He's fallen off the wagon big time."

The ITN News Agency reported in 2008 that Wood had checked into rehab for his alcoholism seven times. Karslake divorced Wood in November 2009, despite the end of his affair with Ivanova.