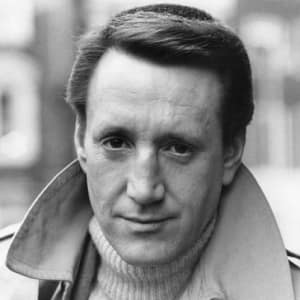 Roy Scheider was born on November 10, 1932, in Orange, New Jersey. He made his film debut in The Curse of the Living Corpse in 1964, and landed his breakthrough role in 1971’s Klute. He earned his first starring role in 1973's The Seven-Ups. In 1975, Scheider snagged his best-known role: as Police Chief Martin Brody in Jaws, directed by Steven Spielberg. He died on February 10, 2008, in Little Rock, Arkansas.

Actor Roy Richard Scheider was born on November 10, 1932, into a working class family in Orange, New Jersey. His, father, Roy Sr., was an auto mechanic who owned and operated a local gas station. His mother, Anna, stayed home to take care of Roy, who was stricken with rheumatic fever at the age of 6. As a result of his illness, Scheider was forced to spend long periods in bed. To entertain himself, he became a voracious reader. But Scheider didn't let his poor health sideline him for long; Roy, Jr. began helping his father in the family business when he was 8 years old. He also competed in several sports, including boxing, which he participated in through the local YMCA. A 140-pound welterweight, Scheider made it to the finals of the New Jersey Diamond Glove championships in 1951. During the competition, an opponent broke Scheider's nose, giving it its distinctive shape.

By the the time Scheider graduated from Columbia High School in Maplewood, New Jersey, he had nearly recovered from his bout with rheumatic fever. Except for a slight heart murmur, Scheider's doctors gave him a clean bill of health. He headed to Rutgers University in New Jersey to study history, but transferred to Franklin and Marshall College in Lancaster, Pennsylvania, after his first year. At Franklin and Marshall, Scheider got his first true taste of the theater, appearing in several stage productions while he earned his history degree and contemplated law school. But the acting bug hadn't quite bitten for Scheider; instead, he enlisted in the U.S. Air Force in 1955, serving three years and rising to the rank of first lieutenant before he was discharged.

Upon his return from the military, Scheider intended to finally head to law school. But when the drama department at Franklin and Marshall offered him a part in a Shakespeare production, Scheider decided to try his hand at acting again. His performance caught the eye of a Broadway scout, and Scheider made his professional acting debut in 1961, appearing as Mercutio in Romeo and Juliet for the New York Shakespeare festival.

Scheider's film debut came three years later in The Curse of the Living Corpse (1964), a low-budget horror film. He also played minor roles in such films as Paper Lion (1968) and Stiletto (1969) before he landed his breakthrough role in the 1971 thriller, Klute. The movie, starring Jane Fonda and Donald Sutherland, featured Scheider as a pimp for a call-girl ring. The film helped put Scheider on the map in Hollywood, and landed Fonda several awards, including an Oscar and a Golden Globe. Scheider's turn at the award ceremonies would come soon enough; the budding actor landed his first Academy Award nomination that same year for his turn in The French Connection (1971), a film about two undercover cops (played by Scheider and Gene Hackman) who try to bust a heroin cartel. Scheider's fame helped him land his first starring role in 1973, playing a renegade cop in the action flick The Seven-Ups. The film featured some of Hollywood's most spectacular car chase sequences—but received no real recognition from fans or critics.

Then Scheider snagged what would become his best known role: playing Police Chief Martin Brody in Steven Spielberg's 1975 film, Jaws. The movie, based on a novel by writer Peter Benchley, told the story of a killer Great White shark who slaughtered unwitting beach-goers in a New England resort town. To save the town's reputation, Brody and marine biologist Matt Hooper take the beast head-on, hoping to kill the creature once and for all. Jaws was an instant smash hit, becoming the first film in movie history to gross more than $100 million and launching the era of the Hollywood blockbuster. One of Scheider's most famous lines in Jaws, the ad-libbed "You're gonna need a bigger boat," was also voted No. 35 on the American Film Institute's list of best quotes from movies.

A year after the success with Jaws, Scheider appeared as secret agent Doc Levy in Marathon Man, co-starring Dustin Hoffman and Sir Laurence Olivier. The critically acclaimed thriller, which told the story of a history student caught in an international crime conspiracy, featured Scheider as double agent Doc Levy. For his next project, Scheider had to pass on a part in the Oscar-winning Vietnam War drama The Deer Hunter (the role went to Robert De Niro) to reprise his role as Chief Brody in Jaws 2 (1978). Unfortunately, the action sequel turned out not to be as successful as the original.

But Scheider bounced back from his box-office flop with the 1979 film All That Jazz. The movie gave viewers a sneak peek into the making of a Broadway musical, while also telling the semi-autobiographical story about choreographer and director Bob Fosse. Because Scheider played Fosse, the actor had to learn how to dance for the role. His performance landed Scheider another Oscar nomination, this time for Best Actor.

Scheider's film career slowed down a bit in the 1980s, but the offers kept coming. Memorable appearances included Blue Thunder (1983), 2010: The Year We Make Contact (1984), Russia House (1990) and Romeo is Bleeding (1993). One of his most praised performances during this period was as the wisecracking Dr. Benway in Naked Lunch (1991). On TV, Scheider starred in Spielberg's SeaQuest DSV and frequently appeared in the TV drama Third Watch.

In 2004, Scheider was diagnosed with multiple myeloma, a cancer of the white blood cells. In June 2005, the actor underwent a bone marrow transplant and entered partial remission shortly afterward. But Scheider's health problems returned, and the actor died on February 10, 2008, of complications from a staph infection. At the time of his death, Scheider he had two movies due for release in 2008: Dark Honeymoon, which had been completed, and Iron Cross, which was in post-production. Dark Honeymoon, a horror film starring Daryl Hannah and Tia Carrerre, was released in 2008 to little fanfare. After fitful starts and stops, Iron Cross was completed with CGI techniques to stand in for Scheider.

Scheider was married to Cynthia Bebout in 1962. The couple had one daughter, Maximillia, before divorcing in the late 1980s. He married actress Brenda Siemer in 1989, and the two stayed together until his death. Scheider is also survived by son Christian and daughter Molly.