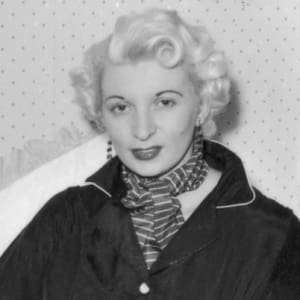 Ruth Ellis is best known for the murder of her lover, leading to her execution, the last of a woman in England.

Ruth Ellis was born October 9, 1926 in Rhyl, Wales. She left home at the age of 14 to work as a waitress. Ruth had two children from different, neither would recognize the child. In a tumultuous relationship with David Blakely, Ruth ended up killing him outside of a pub. She was the last woman to be executed in England.

Murderer. Born Ruth Neilson on October 9, 1927 in Rhyl, Wales. The daughter of a cellist and one of five children raised in a strict Catholic home, Ruth Ellis left school at age 14 to work as a waitress. At age 17, she had a brief affair with a married man and gave birth to a son. After a short while, she never heard from the father again. To support a young child on her own, Ellis began modeling and then became a nightclub hostess.

At the age of 23, Ruth married George Johnson Ellis. The troubled marriage ended in separation and produced a daughter whom George would not acknowledge. Ruth soon took up with another man, David Blakely, but the turbulent relationship was fraught with jealousy. The situation was spinning out of control when, on the evening of Easter Sunday, April 10, 1955, Ellis fired five rounds at Blakely while he was leaving a local pub. Blakely was rushed to the New End Hospital where he was pronounced dead on arrival.

Ruth Ellis was charged with murder and found guilty on June 20, 1955. On July 13, 1955, at the age of 28, Ellis made history by becoming the last woman to hang in England. Her hanging provoked much controversy and in 1965 the death penalty was abolished in Britain.