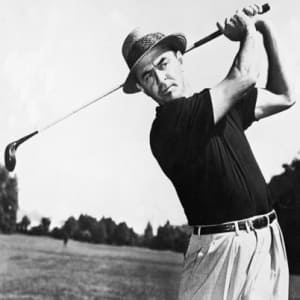 Sam Snead was an American pro golfer who won a record 82 PGA tournaments.

Sam Snead was born on May 27, 1912 Ashwood, Virginia. Despite reportedly never taking a golf lesson, Snead became a U.S. professional golfer who was one of the top players in the world for most of four decades. Known for his folksy image, donning a straw hat and often going barefoot, he was admired for his flowing, powerful swing. “Slammin' Sam” won more PGA tournaments (82) than any other player in history. His total number of wins is estimated at 135. He died in 2002.