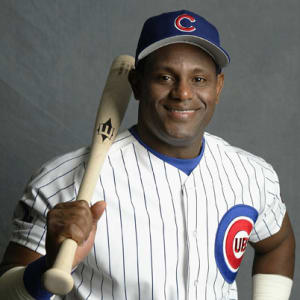 Sammy Sosa is a former MLB slugger, most notably with the Chicago Cubs, with whom he chased Roger Maris’s home run record.

Born on November 12, 1968, in San Pedro de Marcoris, Dominican Republic, Sammy Sosa was a slugger who spent the peak years of his career with the Chicago Cubs. In 1998, Sosa was caught up in race with Mark McGwire of the St. Louis Cardinals to beat Roger Maris's record of 61 home runs in a season. Gwire broke the record first and ended the season with 70 runs while Sosa had a total of 66 runs. Sosa played for the Texas Rangers in 2007, his last professional season.

One of baseball's strongest hitters, Sammy Sosa has seen allegations of performance-enhancing drug use overshadow his success on the field. He was born in the Dominician Republic and had his childhood cut short by tragedy. His father died when he was only seven years old and he helped support the family by doing odd jobs. Sosa went to the United States in 1986 to play baseball for a minor league team in Florida. Nearly three years later, he made his major league debut with the Texas Rangers. In only a few weeks, he was traded to the Chicago White Sox. He hit 15 home runs in his first full season with the team.

In 1992, Sosa went to play for the Chicago Cubs. He continued to rack up the home runs, but he took his game to a whole new level in 1998. Sosa was caught in a race with Mark McGwire of the St. Louis Cardinals to beat Roger Maris' record of 61 home runs in a single season. The nation watched as the two battled it out, keeping count of each run. McGwire broke the record first and ended the season with 70 runs while Sosa had a total of 66 runs. That same year Sosa was selected as the National League Most Valuable Player (MVP).

Sosa remained a strong hitter for the next six seasons with the Cubs, but he started to encounter some problems in 2003. He was suspended for several games for using a corked bat in a game that year. His name also came up in an investigation about steroid use, an allegation he has adamantly denied. Sosa even protested his innocence in front of members of Congress in 2005. He told a congressional committee that "I have never taken illegal performance-enhancing drugs. I have never injected myself or had anyone inject me with anything, " according to The New York Times.That same year, Sosa was traded to the Baltimore Orioles.

While he did not play during the 2006 season, Sosa made a return to the major leagues in 2007 with the Texas Rangers. This proved to be his final turn at a bat. During his 18 years as a professional player, he has been selected as a member of the National League All-Star team seven times. Sosa has scored 609 home runs and has a career batting average of .273.

In 2009, Sosa once again found himself in the midst of a drug-use scandal. A report in The New York Times revealed that Sosa had a positive drug test in 2003, revealing that he had used some type of performance-enhancing drug. The test, done by the Major League Baseball, was supposed to be anonymous, but the information was leaked to the newspaper by an undisclosed source. The congressional committee decided against prosecuting Sosa for perjury for his 2005 testimony.

While he never faced legal action, Sosa still has a dark cloud hanging over his chances for making into the Baseball Hall of Fame. The former slugger has impressive career statistics, but his alleged drug use will be a stumbling block for most voters. Sosa's name is expected to appear on the 2013 ballot for the Baseball Hall of Fame, and many sports pundits believe that he will not garner enough support to be inducted any time soon.