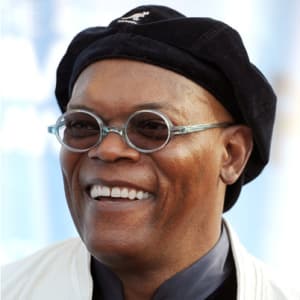 One of the hardest-working Hollywood actors, Samuel L. Jackson has appeared in countless films, including Pulp Fiction, Jurassic Park and Star Wars: Episode I.

Samuel L. Jackson was born on December 21, 1948 in Washington, D.C. He was raised in Chattanooga, Tennessee by his grandmother. Jackson graduated from Morehouse College in 1972 and performed skits about racial inequality with a theatre company. He moved to New York City where his friendship with Spike Lee helped him land his first movie gigs. In 1994, he had landed a role in the cult hit, Pulp Fiction. By the age of 63, he had appeared in more than 100 films, and in 2011 he was named the highest grossing actor of all time with more than $7.2 billion in wealth.

Samuel L. Jackson was born on December 21, 1948 in Washington, D.C., and was raised in Chattanooga, Tennessee, under his grandmother's strict guidance. His mother, Elizabeth Jackson, joined them when he was 10. An early film enthusiast, Jackson frequently saw films at the local movie theatre and gained exposure to the complicated messages surrounding the black presence on screen. Versions of Band of Angels were edited for the black audience in Chattanooga, omitting a scene in which Sidney Poitier slaps a white woman.

Jackson's early memories remained with him when he entered the historically black Morehouse College in Atlanta and became increasingly involved in the black-power movement. In 1969, his junior year, he protested the absence of blacks on the board of trustees by locking several board members in a building for two days, and was promptly expelled from the college. That same year, Jackson watched a performance by the Negro Ensemble Company and gained a new inspiration—acting. After working as a social worker for two years in Los Angeles, Jackson returned to Morehouse to pursue the study of acting and received his degree in 1972.

After college, Jackson joined the Black Image Theatre Company with his future wife, LaTanya Richardson, whom he met at Morehouse's sister school, Spelman College. They toured the country and performed skits characterized by a fiery combination of rage and humor to primarily white audiences. In 1976, having exhausted their enthusiasm for politically-charged theatre, Jackson moved with Richardson to Harlem, New York City, to pursue an acting career outside such strictly defined perimeters of race. He began to act in Off-Broadway productions, including Richard Wesley's The Mighty Gents, an adaptation of Bertolt Brecht's Mother Courage, and Samm-Art Williams's Home. He also got a job substituting for Bill Cosby during The Cosby Show rehearsals.

In 1981, while working on Charles Fuller's A Soldier's Play, Jackson had two life-changing encounters: He met fellow actor Morgan J. Freeman, who became a great friend and convinced Jackson that he could be a successful actor, and a New York University film student named Spike Lee, who expressed his enthusiasm for Jackson's performances and urged him to appear in the films he planned to make. Jackson consented and kept his word, appearing in several of Lee's early films including School Daze, Do the Right Thing, and Mo' Better Blues.

The friendship duly paid off for Jackson, as it was his role as the drug-addicted Gator in Lee's Jungle Fever that finally grabbed critics' attention and inspired some well-earned praise. Judges at the Cannes Film Festival created a Best Supporting Actor category in order to give Jackson the prize. He also received a New York Film Critics award. Through playing an on-screen drug-demon, Jackson was forced to confront his own off-screen demon – an increasingly destructive addiction to drugs and alcohol. The cathartic nature of his performance enabled Jackson to give up drugs, making it both a personal and professional success.

Jackson continued to take small parts in films such as Juice and True Romance, and he played an FBI agent in the thriller White Sands, exhibiting his impressive range and ability to add a quirky twist to every character. He overcame two Hollywood flops, National Lampoon's Loaded Weapon I and Amos & Andrew, by making small but affecting performances in Menace II Society and Patriot Games.

In 1994, after establishing a reputation as one of Hollywood's hardest-working actors, Jackson got a chance to play the pivotal role of his career in Quentin Tarantino's instant cult classic, Pulp Fiction. Working from any actor's dream script, Jackson played Jules Winnfield, a sermon-spewing killer with eruptive speeches up to five pages long. He moved and terrified audiences with his impassioned performance, becoming the elusive moral center of the psychologically twisted film. He received an Academy Award nomination for the role.

Jackson went on to make several big Hollywood films, including John Grisham's A Time to Kill and the action-thriller The Long Kiss Goodnight, but he continued to participate in independent endeavors, such as Steve Buscemi's Trees Lounge. In 1993, Jackson made a much-desired return to the stage in Distant Fires, telling Premiere magazine, "I always want to get back to theater to make sure that I'm still an actor."

Some 1999 performances include a role in the shark thriller Deep Blue Sea and Jedi knight Mace Windu in Star Wars: Episode I: The Phantom Menace.

In 2000, he starred with Tommy Lee Jones in the military thriller Rules of Engagement and in the remake of the classic 1970s blaxploitation hit Shaft. He also costarred with Bruce Willis in Unbreakable, a supernatural thriller written and directed by M. Night Shyamalan.

In 2002, Jackson starred opposite Ben Affleck in Changing Lanes. He also starred in Star Wars: Episode II: Attack of the Clones. In 2005, Jackson starred in the title role of the biopic Coach Carter. That same year, Jackson also starred in Star Wars: Episode III – Revenge of the Sith (2005) followed by Black Snake Moan (2006) and Snakes on a Plane (2006). In 2008, Jackson starred in Jumper. He also played the role of Nick Fury in Iron Man. His appearance comes only after the final credits have rolled—setting up the inevitable sequel to the successful film. He appeared in the sequel, Iron Man 2, in 2010, signing a nine-film agreement with Marvel to play the character.

To add to his many successes, The Guinness Book of World Records named Samuel L. Jackson the highest grossing movie actor of all time in 2011. The majority of Jackson's estimated $7.2 billion in wealth comes from his big franchise films Jurassic Park, Pulp Fiction and Star Wars.

Jackson appears to be busy as ever with his Marvel comics-related films and other projects these days. In 2014, he appeared in Captain America: The Winter Soldier, the crime drama Reasonable Doubt and the Robocop remake among other movies. Jackson also played his popular Marvel character Nick Fury on the small screen around this time. He made guest appearances on the TV series Agents of S.H.I.E.L.D. with Clark Gregg.

In 2015 Jackson appeared in such films as Chi-Raq and The Hateful Eight.

Jackson and Richardson married in 1980, and they currently reside in California. They have one child together, a daughter named Zoe. When a reporter asked why his wife stayed with him during his wilder years, he replied, "She always says to me that I have now grown into the man that she always knew I could be."