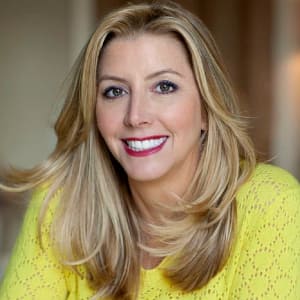 
Sara Blakely came up with the idea for her revolutionary shapewear product in 1998. Two years later, the first version of Spanx hit the market, quickly winning over such famous shoppers as Oprah Winfrey. In 2012, Blakely made the Forbes magazine list of billionaires. She has continued to add more items to the Spanx brand over the years, including a line of jeans in 2015.


Born on February 27, 1971, Sara Blakely is the creator and founder of Spanx, a hugely successful line of shapewear. She grew up in Clearwater, Florida, with her younger brother, Ford. Their father worked as a lawyer and their mother was an artist. Blakely later credited her father with helping her develop the courage to be an entrepreneur. As she told Newsweek, “My father encouraged my brother and me to fail. I specifically remember coming home and saying, 'Dad, Dad, I tried out for this or that and I was horrible,' and he would high-five me and say, 'Way to go.'”

Blakely attended Florida State University, graduating in 1993 with a degree in communication studies. She dreamed of being a lawyer like her father, but she twice scored too low on her LSAT exams to make it into law school. For a time, Blakely ended up working at Walt Disney World. She later became a fax machine salesperson.

In 1998, while working in sales, Blakely came up with a new business idea. She had a pair of white trousers, but she couldn’t find any undergarment she liked to wear under them. As she explained to Forbes, Blakely created her own solution. “I cut the feet off a pair of panty hose and it allowed me to wear a pair of great strappy sandals. I didn’t see lines but the hose rolled up at my feet.”


Blakely realized her footless take on panty hose could be a brilliant product. She spent two years working on her new business venture, working out the final design and registering her patent for this new type of shapewear. Blakely also had to convince a manufacturing firm to produce the product she named Spanx. In the beginning, as she told the Daily Mail, “I had no money to advertise, so I went out on the road and stood in department stores for nine hours a day, lifting up my trouser leg to show customers my tights, and holding up pictures of my own bottom, in my white trousers, with and without my product on.”

Spanx soon proved to be a hit. Blakely landed her first major department store order with Neiman Marcus and appeared on Oprah Winfrey’s “favorite things” list in her first year. Over the years, she expanded her product line to include panties, bras and other shapewear. Blakely also developed quite the celebrity following as such stars as Gwyneth Paltrow publicly raved about her products.

In March 2012, Blakely made the cover of Forbes magazine as the world’s youngest self-made female billionaire. She debuted her special shapewear line for Target, called Assets, that same year. Blakely has continued to grow her business, branching into the jeans market in 2015.

In addition to her shapewear empire, she is a noted philanthropist. She established the Sara Blakely Foundation in 2006, which “is dedicated to helping women globally and locally through education and entrepreneurship,” according to the Spanx website. Blakely also donated $1 million to the Oprah Winfrey Leadership Academy Foundation in South Africa in 2007.


Blakely married former rapper and entrepreneur Jesse Itzler in 2008. The couple has one child together, a son named Lazer.