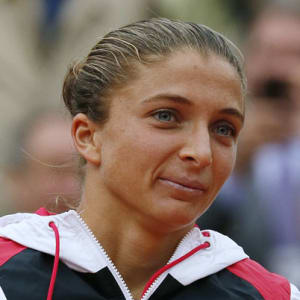 Born on April 29, 1987, in Bologna, Italy, tennis professional Sara Errani was named the best Italian player under 18 when she was 15 years old. After winning her first WTA title in 2008, she advanced to the final of the 2012 French Open. Errani has enjoyed her greatest success in doubles, teaming with Roberta Vinci to capture a career Grand Slam by 2014.

Italian tennis star Sara Errani was born on April 29, 1987, in Bologna, Italy. Errani was named the best Italian player under 18 when she was 15 years old, and kept that title until she was 18. After playing several sports in high school, including football and swimming, Errani found her true niche: tennis. At 12 years old, she was chosen to represent Italy in an international tournament. That year she also enrolled at the Nick Bolletieri Tennis Academy, based in the United States.

Errani has won several Women's Tennis Association singles titles. Her first came in 2008, when she beat Mariya Koryttseva in the Internazionali Femminili di Palermo. Errani claimed her second title shortly afterward by defeating Anabel Medina Garrigues at the Slovenia Open. She went on to help Italy win the Fed Cup in 2009 and 2010.

Errani enjoyed a highly successful year in singles play in 2012. She reached the final round of the French Open by defeating such acclaimed players as Ana Ivanovic and Svetlana Kuznetsova, before losing to Maria Sharapova. Errani notched four tournament victories to finish the year ranked No. 6 in the world.

Errani has acheived most of her success in doubles play. Competing with partner Roberta Vinci, the duo won the doubles title at the French Open and the U.S. Open in 2012. They also triumphed together at the Australian Open in 2013 and 2014, and with their victory at Wimbledon in 2014, they became the fifth pair to complete the career doubles Grand Slam on the women's circuit.