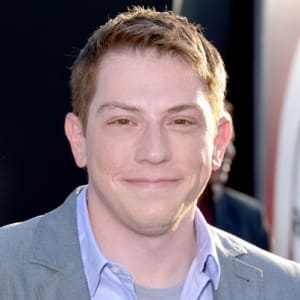 Seth Grahame-Smith is author of the best-selling novels Pride and Prejudice and Zombies and Abraham Lincoln: Vampire Hunter and screenwriter for Dark Shadows.

Born in 1976, Seth Grahame-Smith worked in television and as a freelance writer before his big breakthrough with the mash-up novel Pride and Prejudice and Zombies (2009). He followed up this best-seller with another, Abraham Lincoln: Vampire Hunter (2010). On the big screen, Grahame-Smith penned the screenplay for Dark Shadows (2012) and Abraham Lincoln: Vampire Hunter (2012).

Sometimes credited with kicking off a new genre of literature, Seth Grahame-Smith is the writer of the best-selling mash-up novels Pride and Prejudice and Zombies and Abraham Lincoln: Vampire Hunter. He grew up in Connecticut, living in Weston and later Bethel. He went to Bethel High School, where one of his English teachers remembers him as being "very creative."

After graduating in 1994, Grahame-Smith moved to Boston to study film at Emerson College. He completed his degree there in 1998, and soon made his way to Los Angeles. Working in television, Grahame-Smith served as a producer and writer for such shows as History's Mysteries. After a while, he said he came to a realization that he would rather be the one writing and trying to sell ideas, and became a freelance writer. "I was sitting on the wrong side of the desk—all these writers were pitching me," he told Los Angeles Magazine.

In 2009, Grahame-Smith experienced a tremendous career breakthrough. Quirk Books editor Jason Rekulak had come up with an idea for a literary mash-up, combining the great Jane Austen classic Pride and Prejudice with zombies. Working on a tight deadline, Grahame-Smith rose to the challenge. He created an entertaining revision of the classic work that consisted of 85 percent of Austen's original novel. "When you take a look at the original book, it's almost as if, subconsciously, Jane Austen is laying out the perfect groundwork for an ultraviolent, bone-crushing zombie massacre to take place," Grahame-Smith told Entertainment Weekly.

Pride and Prejudice and Zombies (2009) became a hugely popular novel, selling more than 1 million copies. It has been translated into 20 languages. Grahame-Smith, the book's co-author, alongside Austen, earned praise for his deft handling of the material. A critic for Commentary said of his work: "perfect, deploying just the right tone of ironical detachment." It also spawned a wave of similar mash-ups, including another reworking of Austen's book, Sense and Sensibility and Sea Monsters, which was also published by Quirk. Grahame-Smith sat out Quirk's second Austen project, choosing instead to follow his own path.

Published in 2010, Abraham Lincoln: Vampire Hunter proved to be another a best-seller for Grahame-Smith. This concept novel revolved around the discovery of the late president's diary, which revealed that Lincoln had not only fought the evils of slavery, but vampires as well. Readers snapped copies of this latest mash-up of presidential history and vampire fiction. Some critics, however, were less than impressed. Lisa Schwarzbaum called it "a trivial book, clinging to a fad past its prime."

Prior to publishing the book, Grahame-Smith landed a two-book deal with Grand Central Publishing, rumored to be valued at more than half a million dollars. "I had the idea for Abraham Lincoln floating around for a little while when Zombies came out," he explained to Vanity Fair. "I wasn't sure I wanted to be the guy who did two Jane Austen mashups in a row. Zombies' success gave me the opportunity to do my own book from the ground up."

Also in 2010, Grahame-Smith's and director David Katzenberg's first television series aired. Their high-school comedy, The Hard Times of R. J. Berger, was picked up by MTV. Grahame-Smith also served as a writer and a director on the show, which lasted for two seasons.

A longtime aspiring screenwriter, Grahame-Smith got to see his first major work in the genre make it to the big screen in 2012. He penned the script for Tim Burton's Dark Shadows, which revisits the 1960s gothic soap opera and stars Johnny Depp. While paying tribute to the beloved television series, Grahame-Smith said he "wanted to make something that people would have fun seeing," regardless of whether they were fans of the original show. "I think when people see the movie, they'll realize we struck a good balance between respectful and updated," he told Entertainment Weekly.

Grahame-Smith also helped bring his own novel, Abraham Lincoln: Vampire Hunter, to the big screen later that year. Directed by Timur Bekmambetov, the film featured Benjamin Walker as Lincoln, and Dominic Cooper as a good vampire who helps Lincoln battle his blood-thirsty brethren. Another film adaptation is in the works for Grahame-Smith's latest novel, Unholy Night, which uses the birth of Jesus as the backdrop for an action-adventure tale. Grahame-Smith said that the idea for the book came from one question: "What do we really know about the three wise men?" His company, KatzSmith Productions, which co-founded with David Katzenberg, will help produce the film version of the novel. He and Katzenberg also have several other projects in development, including an animated tale, entitled Night of the Living.

Grahame-Smith lives in Los Angeles with his wife, and they have a son. A lifelong fan of the horror genre, Grahame Smith loves to read nonfiction in his free time. "I would say 90 percent of my reading is biographies and nonfiction history. I read a lot by Doris Kearns Goodwin and David McCullough, and Walter Isaacson."