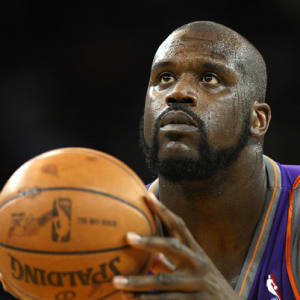 Standing 7 feet tall and weighing 315 pounds, Shaquille O’Neal was one of the most dominant players in the NBA. After his 2011 retirement, he became an on-screen league analyst.

Who Is Shaquille O'Neal?

Born in Newark, New Jersey, on March 6, 1972, Shaquille O'Neal went on to become one of the most dominant players in NBA history, helping his teams to win NBA Championships and Olympic gold. Following his 2011 retirement, Shaq became an NBA analyst, working alongside the likes of Charles Barkley and Ernie Johnson.

O'Neal has an estimated net worth of $400 million, according to Celebrity Net Worth.

In his rookie season with the Orlando Magic, Shaquille O'Neal, also known as "Shaq," finished in the Top 10 in scoring, rebounding, blocks and shooting percentage. A notoriously bad free-throw shooter, Shaq focused on trying to get more of his points on the power slam, and hearty NBA centers quickly learned to try to foul Shaq rather than give him an easy shot. Shaq became the first player in NBA history to be named "Player of the Week" in his first week in the league.

In 1996, Shaq signed the biggest contract in NBA history, seven years for $120 million with the Los Angeles Lakers. That same year, he helped the United States' Dream Team win gold at the Olympic Games in Atlanta, Georgia.

Prior to the 2000-01 season, the Lakers signed Shaq to a three year, $88.5 million contract extension, and the larger-than-life center helped deliver three consecutive world championships to the team (2000, 2001 and 2002). In 2004, however, following growing dismay with team management and friction with teammate Kobe Bryant, Shaq was traded to the Miami Heat.

During the 2004-05 season, Shaq averaged a double-double (22.9 points per game and 10.4 rebounds), and in 2006, he helped the Heat capture the NBA championship — the fourth championship win of his career. Shaq also led the league in field goal percentage in both 2005 and 2006, and during the 2006-07 season, he reached a career milestone: scoring his 25,000th point. Following the 2007-08 season — his fourth season with the Heat — Shaq was traded to the Phoenix Suns. He would only play for one season with the Suns, but that didn't stop him from earning acclaim: Highlights from 2008-09 include leading the league with a .609 FG percentage, and being named the NBA All-Star Game's co-MVP in 2009.

Shaq then traveled to the Midwest, joining the Cleveland Cavaliers via a trade deal that cost the team $500,000 and two players. His 2009-10 highlights include helping the Cavs earn the No. 1 seed in the playoffs, where he averaged 11.5 PPG, and establishing a season average of 12 points and 6.7 rebounds per game. It was also during this season that Shaq became the oldest NBA player in the sport's history.

After only one season with the Cavs, Shaq became a free agent and, in August 2010, signed with the Boston Celtics. Unfortunately, an achilles injury proved to be an incredible detriment to the player and team in 2010-11: In addition to missing 27 season games, Shaq sat out the first round of 2011 playoffs and played just two games of the second round.

On June 1, 2011, Shaq announced his plans to retire from the NBA on his Twitter page, stating: "We did it. Nineteen years, baby. I want to thank you very much. That's why I'm telling you first. I'm about to retire. Love you. Talk to you soon." After officially retiring in 2011, Shaq became an NBA analyst for Turner Network Television. His new role has seen him working alongside the likes of legendary NBA players Charles Barkley, Ernie Johnson and Kenny Smith on Inside the NBA. Shaq renewed his contract with the show in 2015.

In addition to working as an on-screen NBA analyst, Shaq has spent his time off the court reinventing himself as both a musician and actor. In 1990, he appeared on Fu-Schnickens' Top 40 single What's Up Doc?. In 1993, he released his solo debut, Shaq Diesel. With help from artists like Def Jef, the album achieved platinum status. Thanks to a slew of guest-stars, Shaq-Fu Da Return, released in 1994, established Shaq as a gold-certified rap artist. His third album, 1996's You Can't Stop the Reign, was released under his own imprint, TWIsM (The World Is Mine) Records. Respect was released in 1998, and Presents His Superfriends appeared in 2001.

Shaq has also appeared in several films, including Blue Chips with Nick Nolte, and starred in vehicles such as Kazaam! and Steel, for which he also recorded the soundtrack albums. In recent years, he has worked a variety of film and television projects, ranging from a guest spot on the gritty police drama Southland in 2013 to starring in his sitcom pilot in 2015. In 2018 he starred alongside Kyrie Irving, Tiffany Haddish and a slew of former NBA players in the sports comedy Uncle Drew.

Additionally, Shaq has devoted a great deal of time to advancing his own education, earning two graduate degrees. After receiving a Master of Business Administration degree from Barry University in Florida in 2005, he returned to the university, and was awarded a doctorate degree in education in 2012.

Shaq has four children with ex-wife Shaunie Nelson, as well as another daughter by an ex-girlfriend.

Athlete, actor and musician Shaquille Rashaun O'Neal was born on March 6, 1972, in Newark, New Jersey. After graduating from Cole High School in San Antonio, Texas, he enrolled at Louisiana State University, and would go on to become one of the most dominant players in the NBA.

During his years at Louisiana State, Shaquille O'Neal — standing 7 feet tall and weighing 315 pounds — was named "College Player of the Year" (1991) and twice named a unanimous first team All-American (1991, 1992). He dropped out of college in 1992, after his junior year, to pursue a career in the NBA.