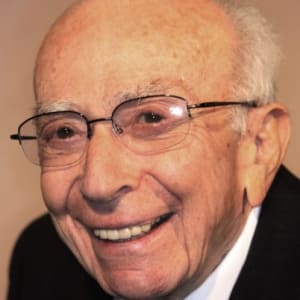 Sherwood Schwartz was an Emmy Award-winning screenwriter and creator known for the comedy classics Gilligan’s Island and The Brady Bunch.

Born on November 14, 1916, in Passaic, New Jersey, Sherwood Schwartz was a pre-med/science student before joining his brother to work for radio's The Bob Hope Show. Turning to television and earning an Emmy for his writing on The Red Skelton Show (1951-71), Schwartz later created two major classics—Gilligan's Island (1964-67) and The Brady Bunch (1969-74), for which he wrote the theme songs as well. He died on July 12, 2011, at 94.

Famed television producer and writer Sherwood Schwartz was born on November 14, 1916, in Passaic, New Jersey. Schwartz created two of TV's most enduring comedies, Gilligan's Island and The Brady Bunch. He got his start in 1939, working as a writer on Bob Hope's radio show. During World War II, Schwartz served in the U.S. Army and wrote for the Armed Forces Radio Service.

While the concept for Gilligan's Island may have been a bit high-brow, the comedy itself was usually of the slapstick variety. The kind, but bumbling Gilligan (Bob Denver) was always getting into some type of trouble, much to the Skipper's dismay. And for allegedly uncharted island, the castaways had the most unusual visitors, including a jungle boy, an adventurer, a movie producer, a surfer and two Russian cosmonauts. While many critics saw the show as fluff, audiences loved it. The show ran for three seasons.

Schwartz's next series, It's About Time, premiered in 1966, but was short-lived, lasting only a season. It featured two astronauts who accidentally end up returning to Earth during the Stone Age. Comedy legend Imogene Coca played one of the prehistoric people that the astronauts encountered. Tackling a simpler premise, Schwartz fared much better with his next effort, The Brady Bunch. Debuting in 1969, the show looked at the life of what would be called now a blended family. Carol Brady (Florence Henderson), a widow, had three daughters from her first marriage while her new husband, Mike Brady (Robert Reed), a widower, had three sons from his first marriage.

The Brady Bunch drew much of its humor from the everyday events related to this familial merger. For instance, in one episode, the kids get into a squabble over the phone so Mike installs a pay phone. Another episode was about a family camping trip with the girls pitted against the boys—in fact, the "battle of the sexes" appeared as a theme in a number of episodes. The Brady Bunch ended its original run in 1974, but was revived briefly as The Brady Bunch Hour in 1977. It also inspired the 1972 animated series, The Brady Kids.

In 1995, Schwartz helped breathe new life into the Brady Bunch franchise with a big screen adaptation of the show. The Brady Bunch Movie starred Shelley Long and Gary Cole as Carol and Mike Brady. Set in modern times, the Bradys remained true to their wholesome, squarish 1970s selves, which caused much hilarity as they interacted with contemporary characters. The film was so popular that spawned a sequel, A Very Brady Sequel (1996) to be exact. Schwartz served as a producer on both projects along with his son Lloyd.

More recently, the Gilligan's Island concept was used as the basis for a reality show. Beginning in 2004, The Real Gilligan's Island ran for two seasons on the TBS cable channel and featured real-life skippers, millionaires, and others working in teams and competing to get off the island and win prizes.

Sherwood Schwartz died in Los Angeles, California, on July 12, 2011, at the age of 94. He was survived by his wife, Mildred, and four children.