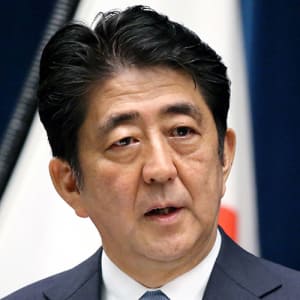 Who Is Shinzo Abe?

Shinzo Abe (born September 21, 1954) served as Japan's prime minister from September 2006 to September 2007, and became prime minister again in 2012 with a promise to fix Japan's ailing economy (following policies that were dubbed "Abenomics"). He is a right-wing politician from a family with deep political roots who belongs to Japan's Liberal Democratic Party. In his book Toward a Beautiful Country (2006), Abe shared details about his life and vision for Japan; one long-standing goal is to amend Japan's pacifist constitution. Wearing a Super Mario costume, he appeared at the Olympic closing ceremonies in Rio de Janeiro to herald the Olympic Games being hosted by Tokyo in 2020.

Since 1987, Abe has been married to Akie (Matsuzaki) Abe, who has worked as a radio DJ and operates an izakaya (a Japanese pub-style restaurant) in Tokyo.

Akie has talked about unsuccessfully undergoing infertility treatments during their marriage. The couple decided not to adopt, and have no children.

When Was Shinzo Abe Born?

Shinzo Abe was born on September 21, 1954, in Tokyo, Japan (some sites incorrectly list Nagato, which is Abe's hometown in the Yamaguchi prefecture, as his birthplace).

Abe stopped by Trump Tower — bearing a gold-plated golf club as a gift — nine days after the surprising results in 2016 U.S. presidential election, making him the first foreign leader to visit the president-elect. Abe and Donald Trump next met at the White House in February 2017, where they shared an awkward 19-second-long handshake; on that trip, Abe also joined the president at Mar-a-Lago, Trump's Florida club, where the two played golf and — while seated on an open-air terrace and surrounded by club members — took in news of a North Korean missile launch.

When Trump traveled to Japan in November 2017, Abe presented him with a hat featuring the slogan: "Donald & Shinzo Make Alliance Even Greater." Trump's sojourn in Japan included another visit to a golf course, during which Abe stumbled and fell backwards into a bunker (the prime minister quickly recovered and resumed the game). In April 2018, Abe again visited Trump at Mar-a-Lago; the two made time for more golf.

Despite golfing outings, the relationship has not been as productive as Abe may have hoped: Trump took the United States out of the Trans-Pacific Partnership (though Abe got the other members of the pact to stick with the agreement). Other U.S. allies were granted exemptions from Trump's steel and aluminum tariffs in March 2018, but Abe's government was left out in the cold. And Trump stunned the prime minister by agreeing to conduct a summit in June 2018 with North Korea's Kim Jong Un (Abe was likely relieved by Trump's decision to cancel on Kim).

In September 2006, Abe became prime minister of Japan (Japan has a parliamentary system in which the prime minister is usually the leader of the party with the most seats in the lower house of the Diet, the country's legislative body; Abe's party — the Liberal Democratic Party — has held power for all but a few years since its founding in 1955). Abe was the country's youngest prime minister since World War II and the first to be born after the war. He'd been a member of the legislature since 1993, though he'd only joined the cabinet in 2005. Abe resigned as prime minister in September 2007, citing poor health.

In September 2012, Abe made a comeback as head of the LDP, and after the LDP succeeded at the ballot box, began his second term as prime minister on December 26, 2012. In 2014 and 2017, Abe called for snap elections; the wins solidified his control and showed support for his program of economic renewal (though electoral success was made easier by a weak opposition).

In 2017 the LDP changed its rules to allow its leader to serve three terms, instead of two, so Abe could run for a third term as head of the LDP in September 2018. If he holds onto this leadership role, Abe could remain at the head of the government through 2021 (making him Japan's longest-serving prime minister; particularly notable given that others often only last for a couple of years). But ongoing scandals and sinking approval ratings may result in a challenge to Abe's leadership, or even another resignation.

Abe is a conservative who believes in increasing Japan's ability to defend itself, a goal shared by his maternal grandfather, who also served as one of Japan's prime ministers. However, the priority for Abe's second term has been rebuilding Japan's troubled economy.

In 2012 Abe campaigned on boosting Japan's economy, which had the problems of ongoing deflation, an aging population, the aftereffects of the 2007-2008 financial crisis and a devastating earthquake and tsunami in 2011. Abe's economic policy — known as "Abenomics" — consists of three arrows: monetary easing, the stimulus of increased government spending and structural reform.

One aspect of reform was growing the economy via a higher labor participation rate for women — dubbed "womenomics." To accomplish this, Abe took steps to increase the number of day-care spots available and create more female-friendly work environments.

Under Abe, the economy has seen some growth, though it hasn't met hoped-for inflation rates. The introduction of a sales tax in April 2014, intended to pay down debt, was a drag on the economy, so a second tax hike was delayed until 2019.

Article 9 of Japan's constitution states "the Japanese people forever renounce war" and "land, sea, and air forces, as well as other war potential, will never be maintained" — though the country does have its Self-Defense Forces (SDF). The constitution was drafted by Americans occupying defeated Japan after World War II, and many conservatives dislike a document that they view as imposed by foreigners. In his first term as prime minister, Abe wanted to change Article 9, but his early resignation forestalled action.

Following his 2012 return to leadership, Abe once again focused on Article 9. In 2015 he pushed through legislation reinterpreting the constitution so as to allow the SDF to deploy overseas to assist allies for "collective self-defense." He suggested in 2017 that Article 9 could be amended to acknowledge the existence of the SDF.

Abe's party holds a two-thirds majority in both houses of the Diet, making it possible to undertake constitutional change, but the final step requires majority approval in a public referendum — and despite concerns regarding a nuclear-armed North Korea and the readiness of America to defend Japan, support for the pacifist stance remains popular.

North Korea fired missiles over Japan in 2017, but the rogue nation has long been a concern of Abe's. In 2002 five Japanese citizens kidnapped by North Korea in the 1970s returned to Japan (joined later by their children). Since then, Abe has continued to try to obtain information about other missing Japanese (the number of victims is unclear; 17 abductees are officially recognized by the government, while the North Korean regime says there were only 13, eight of whom died in captivity).

Abe also has to deal with regional conflicts with China, as the two countries each claim islands in the East China Sea as their own.

In 2013, despite vocal opposition, a law with the aim of guarding state secrets was put into effect by Abe's party. It instituted a possible penalty of ten years in prison for civil servants who release state information, and five years for citizens who share that information — potentially putting journalists at risk.

In 2017, news broke that Moritomo Gakuen, an ultranationalist educational foundation with ties to Abe's wife, had purchased public land in Osaka at a rate well below market value. Abe denied wrongdoing, but the scandal became fresh news again in March 2018 when the public learned that documents related to the transaction — shared with the legislature during an investigation — had been altered to remove references to Abe and his wife, among other names. Abe stated he'd had no involvement with the changes.

Abe has also been accused of wielding influence to help a friend start a new veterinary school in a special economic zone, another charge that he denies.

Late in 2013, when he was in office as prime minister, Abe visited the Yasukuni shrine, a memorial to Japan's war dead that includes World War II criminals; this angered countries like China and South Korea. He has not repeated the visit, though he still sends ritual offerings.

In a 2015 statement marking the 70th anniversary of World War II, Abe reiterated past expressions of regret for the war, but also said he did not want Japan to continue apologizing indefinitely for its wartime actions.

In March 2007, Abe said that the women forced to work in Japanese military brothels during World War II — known as "comfort women" — had not been coerced. He later apologized.

Many of the estimated 200,000 women who endured sexual servitude were Korean; a 2015 agreement between Japan and South Korea, with a monetary payment and apology, was meant to resolve the issue between the two countries. Some victims weren't satisfied with this process, but in 2018 Abe balked at the idea of making another apology.

Ill health was the reason given for Abe's abrupt resignation from his first term as prime minister. He later revealed that he suffers from ulcerative colitis, a chronic inflammatory bowel disease he'd dealt with since middle school, but which apparently worsened as he led the country. Abe has attributed the recovery that allowed him to re-enter politics to the drug Asacol.

Abe's father, Shintaro Abe, was a foreign minister; following his father's death in 1991, Abe ran for and won his seat in the Diet in 1993.

After World War II, Abe's maternal grandfather, Nobusuke Kishi — who'd worked as an industrial planner in Japanese-occupied Manchuria in the 1930s — was arrested as a Class A war criminal. He was not indicted, and his anti-communist views helped secure his release in 1948. Kishi served as prime minister from 1957 to 1960. Like Abe, he wanted to alter the pacifist Article 9 in Japan's constitution.