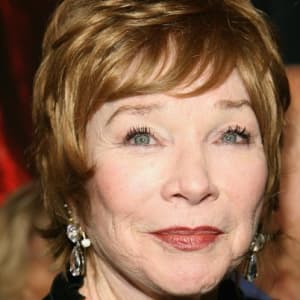 Shirley MacLaine is one of Hollywood’s legendary leading ladies, known for a vast span of films that include The Apartment, Sweet Charity and Terms of Endearment.

Born on April 24, 1934, in Richmond, Virginia, Shirley MacLaine grew up with sibling Warren Beatty and went on to Broadway. In the mid-1950s, she started working in film, with a decades-long career in classics like Can-Can, The Apartment, Sweet Charity, Irma La Douce and Terms of Endearment, for which she won an Oscar. She is also a prolific writer, having authored several books. In 2013, she received the Kennedy Center Honors.

Born on April 24, 1934, in Richmond, Virginia, actress Shirley MacLaine has enjoyed an impressive career in film, television and the theater for more than six decades. She was originally named Shirley MacLean Beaty. Her first name was reportedly inspired by the famed child actress Shirley Temple. She later adapted her mother's maiden name, "MacLean," into her stage name of "MacLaine."

The daughter of a drama teacher, she started out as a dancer. Her parents enrolled her in ballet when she was a toddler. MacLaine soon got a taste for performing at a dance school recital. Around this time, she became a big sister with the birth of her brother Warren Beatty. He would grow up to be a successful actor in his own right.

During summers during high school, MacLaine went to New York City to study her craft and to pursue her dream of being an entertainer. She landed a part in the chorus in a new production of the musical Oklahoma after her junior year. When the summer ended, MacLaine returned home to finish school.

MacLaine's big break came in the mid-1950s with the Broadway musical The Pajama Game. She was a member of the show's chorus as well as an understudy for one of its lead characters. After producer Hal Wallis saw her perform, MacLaine landed a contract with Paramount Pictures. She made her film debut in 1955's The Trouble with Harry directed by Alfred Hitchcock.

Three years later, MacLaine picked up her first Academy Award nomination for Some Came Running. This Vincente Minnelli-directed drama starred Frank Sinatra as a soldier who returns home after World War II. MacLaine plays Ginnie Moorehead, a party girl who falls for Sinatra's character and follows him to his hometown. Off-screen, MacLaine befriended Sinatra, Dean Martin and the rest of their friends known as the Rat Pack. She even appeared in their 1960 crime caper Ocean's Eleven, which also featured Sammy Davis Jr. and Peter Lawford.

In 1960, MacLaine delivered one of her best performances in The Apartment. She co-starred with Jack Lemmon in this Billy Wilder classic, playing a young elevator operator named Fran Kubelik who has an affair with the company's big boss, but later falls for Lemmon's character. MacLaine picked up an Academy Award nomination for the film. The critical success of The Apartment helped propel her career as a dramatic actress, opening the door to such serious works as The Children's Hour (1961) with Audrey Hepburn and Two for the Seesaw (1962) with Robert Mitchum.

MacLaine reunited with Billy Wilder and Jack Lemmon for the 1963 romantic comedy Irma la Douce. In the film, she plays the title character, a Parisian prostitute. MacLaine received her third Academy Award nomination for her work in the movie. In the musical Sweet Charity (1969), she plays another type of working girl—a taxi dancer. The production gave her a chance to return to her musical theater roots and to work with the legendary Bob Fosse. Richardo Montalban, Chita Rivera and Sammy Davis Jr. also appeared in the film.

In 2014 interview, MacLaine recalled working with Wilder, “Billy was not exactly acquainted with feminist equality, let’s put it that way. He could be very harsh with women,” she says. “I think that’s one of the things that bothered Marilyn [Monroe, who Wilder directed in the comedy classic Some Like It Hot]. She was afraid of him, so she would be late and stuff like that.”

MacLaine has enjoyed a substantial second career as an author. She published her first memoir, Don't Fall Off the Mountain, in 1970. Since then, MacLaine has chronicled her experiences and explored numerous aspects of her life in several more volumes. She wrote about her 1973 tour of China in You Can Get There From Here and delved into her New Age beliefs and reincarnation in 1983's Out on a Limb.

More books soon followed, including Going Within (1989) and. MacLaine explored her family life in Dance While You Can (1991) and her career in 1995's My Lucky Stars: A Hollywood Memoir. In 2000, she shared her personal pilgrimage in Camino: A Journey of the Spirit. In her more recent works, MacLaine has given readers her perspectives as one of society's more mature members. She penned Sage-ing while Age-ing (2007) and I'm Over All That (2011).

MacLaine continued to gave strong performances in the 1970s and the 1980s. In The Turning Point (1977), she stars as a former dancer who gave up her career to have a family. Her daughter follows in her footsteps, and MacLaine's character is forced to confront her old dance rival (Anne Bancroft). Once again nominated for an Academy Award, she went home empty-handed this time around.

In 1983, MacLaine finally claimed her Oscar statue for Terms of Endearment. She plays Aurora Greenway, a woman with a troubled relationship with her daughter, in the film. Debra Winger stars as her daughter and Jack Nicholson as her love interest in this popular tearjerker. In her acceptance speech at the Academy Awards, MacLaine said "I have wondered for 26 years what this would feel like," according to the Hollywood Reporter. Vanity Fair also notes that she added "I deserve this."

MacLaine appeared in the 1989 ensemble drama Steel Magnolias with Olympia Dukakis, Sally Field, Dolly Parton and Julia Roberts. She tackled the role of one of her real-life contemporaries the following year. In Postcards from Edge, based on Carrie Fisher's memoir, MacLaine plays actress Debbie Reynolds. According to the Hollywood Reporter, Reynolds gave MacLaine at least one critique of her performance. "She didn't think I should have put vodka in the smoothie," MacLaine said.

MacLaine tried to recapture the success of Terms of Endearment with the 1994 sequel The Evening Star, but without much success. She returned to comedy in 2005 with a trio of releases—Bewitched, Rumor Has It and In Her Shoes. She plays the witch Endora opposite Nicole Kidman's Samantha in this adaptation of the classic television series. In both Rumor Has It and In Her Shoes, MacLaine plays the grandmother to likes of such stars as Jennifer Aniston, Cameron Diaz and Toni Colette.

Now in her seventies, MacLaine continues to seek out new roles and challenges. She played the legendary fashion designer Coco Chanel in the 2008 television movie Coco Chanel. In 2011, MacLaine co-starred with Jack Black and Matthew McConaughey in the light-hearted crime drama Bernie.

MacLaine moved to the small screen to join the cast of the much beloved British period drama Downton Abbey for its third season. MacLaine plays the American mother of Cora Crawley, Countess of Grantham, on the show. Viewers enjoyed watching her character match wits with the Dowager Countess of Grantham played by Maggie Smith. In 2013, MacLaine was recognized for her role in influencing American culture through her art by as a recipient of the Kennedy Center Honors.

Shirley MacLaine was married to Steve Parker, a producer and businessman, from 1954 to 1982. The couple had a daughter, Stephanie, better known as Sachi. The pair had an unusual relationship with Parker spending much of his time living in Japan. Her daughter Sachi also spent part of her youth living abroad with her father.

In 2013, Sachi Parker shared her experiences as MacLaine's daughter in the memoir Lucky Me: My Life With—and Without—My Mom, Shirley MacLaine. She claimed that her mother pressured her to lose her virginity as a teen and had pair of sex therapists in the house during her first sexual experience, according to the New York Daily News. MacLaine has dismissed the book, saying “I'm shocked and heartbroken that my daughter would make statements about me that are virtually all fiction" in the same article.