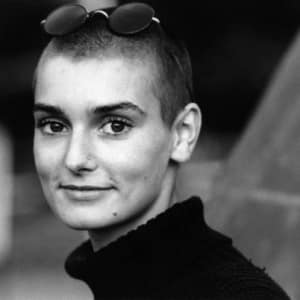 With her signature shaved head, Sinead O’Connor emerged in the ’90s with a powerful voice and a big hit, ‘Nothing Compares 2 U,’ along with a fair share of controversy.

Born on December 8, 1966, in Dublin, Ireland, Sinead O'Connor started her music career when she was discovered by a local drummer. With fame came controversy: Among other incidents, O'Connor tore up a picture of the pope during an appearance on Saturday Night Live in 1992 and has more recently been known for using social media to express her personal struggles.

Born December 8, 1966, in Dublin, Ireland, Sinead O'Connor had a difficult childhood (her parents divorced early on and her mother was frequently abusive), and she was sent to reform school after being caught shoplifting. Her music career began when she was "discovered" by the drummer of the popular Irish band In Tua Nua and co-wrote their hit song "Take My Hand." Before finishing school, O'Connor ran away to Dublin, where she sang and played guitar on the street and in pubs and worked for a singing telegram service.

While performing with a Dublin band called Ton Ton Macoute, O'Connor caught the attention of the two owner-managers of a small London record label called Ensign Records. Ensign released her debut album, The Lion and the Cobra, late in 1987. Critics lauded O'Connor's powerful and expressive voice and noted the complexity of her songs, even while acknowledging their decidedly uncommercial nature. Though it had no major hit singles, the album eventually sold over 500,000 copies and went platinum.

With the 1990 release of O'Connor's second album, I Do Not Want What I Haven't Got, the bald-headed singer-songwriter became an international star. Driven by the phenomenal success of the smash hit single "Nothing Compares 2 U" (a once-obscure song written by Prince and first recorded by a band called the Family), the album shot to the top of the Billboard charts and nabbed O'Connor four Grammy Award nominations including Best Album, Best Song, Best Female Vocalist, and Best Alternative Album. The video for "Nothing Compares 2 U" won the MTV Award for Video of the Year, and O'Connor was named Artist of the Year in 1991 by Rolling Stone.

Her next two albums, Am I Not Your Girl? (1992) and Universal Mother (1994), made far less of an impact either critically or commercially. Soon, however, O'Connor became famous for her controversial public outbursts, beginning in 1989 when she announced her support for the radical Irish Republican Army (IRA); she retracted the statement one year later. She again made headlines in 1990 when she refused to appear onstage in New Jersey if "The Star-Spangled Banner" were played before the concert. In 1991, O'Connor boycotted the Grammy ceremony and refused her award for Best Alternative Album, maintaining that her absence was a protest against the extreme commercialism of the Grammy Awards.

Even more publicity surrounded a 1992 performance by O'Connor on Saturday Night Live, during which she tore up a photograph of Pope John Paul II, denouncing the Catholic Church as "the real enemy." Despite her contempt for the clerical hierarchy and to bring attention toward allegations of child abuse within the institution, O'Connor maintained she was a Catholic and devoutly spiritual. "It's not the man, obviously — it's the office and the symbol of the organization that he represents. I consider them to be responsible for the destruction of entire races of people and the subsequent existence of domestic and child abuse in every country they went into," the singer stated in a 1992 interview with Time magazine.

Aside from the release of her 1997 single, Gospel Oak, O'Connor's recording career faltered in the late 1990s, eclipsed by the turmoil in the singer's private life. In 1995, an extended custody battle began between O'Connor and her ex-lover, Irish journalist John Waters, over their infant daughter, Roisin. Plagued by Waters' bitter accusations that she was an unfit mother, O'Connor attempted suicide in March 1999. While recovering, O'Connor agreed to let Roisin live with Waters in Dublin. A few days later, however, she snatched the girl from Waters' home and flew with her back to London. (In addition to Roisin, O'Connor has a son, Jake, with her first husband John Reynolds.)

Less than a month later, O'Connor made headlines in an altogether different way-in April 1999, she was ordained as the first-ever priestess of the Latin Tridentine Church, a dissident Catholic group led by a self-styled Roman Catholic bishop from Ireland named Michael Cox. In April 2000, Mother Bernadette Marie (O'Connor's clerical name) was elevated to Archdeacon for her work with Dublin's homeless.

In 2000, O'Connor signed with Atlantic Records. Her first album in six years, Faith & Courage, was released later that year. Her personal life made headlines the following year. After a whirlwind romance, O'Connor married the British journalist Nick Sommerlad in a secret ceremony in the summer of 2001. But this union did not last. The pair soon split up. She went on to release an album of traditional Irish music, Sean-Nós Nua, in 2002.

O'Connor announced that she was retiring from music in 2003. She Who Dwells in the Secret Place of the Most High Shall Abide Under the Shadow of the Almighty (2003) was supposed to be her last album. According to People magazine, O'Connor posted this message on her website: "I am a very shy person, believe it or not. So I ask with love, that I be left in peace and privacy by people who love my records too." She welcomed a third child, a son named Shane, with Irish trad musician Donal Lunny around this time.

O'Connor did not retire from the music scene for long. In 2005, she released the reggae-influenced Throw Down Your Arms. O'Connor continued to produce new music with 2007's Theology and add to her family. She gave birth to her fourth child, Yeshua Bonadio, that same year. Yeshua's father is Frank Bonadio.

In 2010, O'Connor once again tried for wedded bliss. She married friend and frequent collaborator Steve Cooney that year, but the union didn't last. The pair called it quits the following spring. Undeterred from finding her happily ever after, O'Connor married for the fourth time in December 2011. She and Barry Herridge tied the knot in Las Vegas, but she announced that the marriage was over after only 18 days.

Despite her rocky personal life, O'Connor earned strong reviews for her 2012 effort How About I Be Me (And You Be You)?. Her next record, I'm Not Bossy, I'm the Boss (2014), also received a warm reception. In late 2015, O'Connor experienced some type of mental health crisis. She wrote two notes indicating that she was suicidal on her Facebook page before her family requested that the page be taken down. O'Connor was reportedly hospitalized after her first Facebook post.

In May 2016 O'Connor went missing for a day while biking in Chicago, only to be found by authorities soon after. She then proceeded to write about her personal struggles again on Facebook, this time a scathing attack on her family, blaming them for her mental health crisis.