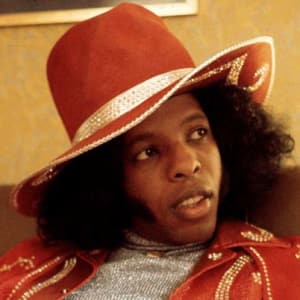 Musician Sly Stone was the frontman and songwriter for the late 1960s to early ’70s funk band Sly and the Family Stone, of such popular hits as “Loose Booty.”

Sly Stone was born in Texas in 1944. In 1966, Stone merged his band the Stoners with his brother Freddie's band to form Sly and the Family Stone, who went on to record numerous funk classics. However, as Sly Stone's cocaine use increased, so did his failure to meet the band's commitments, and in 1976 he declared bankruptcy. In 1993, Sly and the Family Stone were inducted into the Rock and Roll Hall of Fame, and in 2011 Stone released a comeback album.

Musician Sly Stone was born Sylvester Stewart to mother Alpha and father K.C. in Denton, Texas, on March 15, 1944. Music was central to the family dynamic; Sylvester and his four siblings performed in a gospel group, the Stewart Four, with Sylvester on vocals, after the family moved to Vallejo, California.

Following his graduation from Vallejo High School, Stewart went on to study music theory at Vallejo Junior College. In his early 20s, he then became a popular radio disc jockey on San Francisco's KDIA and KSOL stations. In collaboration with his boss, Tom "Big Daddy Donahue," in 1964 Stewart produced soul singer Bobby Freeman's hit song "C'mon and Swing." Soon after, Donahue made Stewart a house producer of his label, Autumn Records. As a producer, Stewart adopted the stage name Sly Stone.

Sly and the Family Stone

Capitalizing on his new stage name, Stone started a band called the Stoners. In 1966, he and the Stoners' trumpeter, Cynthia Robertson, merged with his brother Freddie's band, Freddie and the Stone Souls. The marriage gave birth to the one-of-a-kind funk band Sly and the Family Stone, with Stone serving as both frontman and songwriter. The band's members also included Sly and Freddie's cousin, revolutionary bass player Larry Graham; drummer Greg Errico; and sax player Jerry Martini. Sly and Freddie's sister, Rosemary Stewart, also joined them on keyboard a year later.

Although their debut 1967 album A Whole New Thing flopped, they had their first taste of success the following year with the single "Dance to the Music," which became a Top 10 hit and was featured on an album of the same name. After following up with the only vaguely popular album Life, the band experience a major reversal of fortune with their third offering, 1969's Stand! Featuring the hit singles "Everyday People" (No. 1) and "Stand!" (No. 22), the album rose to No. 3 on the charts. They followed their chart success quickly with the singles "Hot Fun in the Summertime" and "Thank You," which reached No. 2 and No. 1, respectively, making Sly and the Family Stone one of the hottest acts of the period.

Despite fans' expectations, 1970 came and went with no new album. Also during this time, the band had begun to develop a reputation for showing up late to performances or missing them altogether—due in large part to Stone's drug abuse. The band had, however, made it to Woodstock, where they delivered a landmark performance of "I Want to Take You Higher" on August 17, 1969.

Out of the Spotlight

However, as Stone's cocaine use increased, so did his paranoia and his failure to meet the band's commitments. In 1969, he moved from San Francisco, California, to a mansion in Bel Air. In his new home, he stockpiled guns, cocaine and PCP and procured himself a vicious guard dog. The release of Sly and the Family Stone's eerie 1971 album, There's a Riot Going On, confirmed to listeners that Stone had grown disillusioned, though it did produce the No. 1 single "Family Affair." Following the album's release, Greg Errico left the band, and while Sly and the Family Stone managed to eke out a few more hits, including "If You want Me to Stay" (1973) and "Time for Livin'" (1974), 1976 found Stone declaring bankruptcy.

Stone took a few stabs at comebacks during the late 1970s and 1980s, but his continued cocaine use ultimately landed him in jail. Throughout the 1990s, he largely stayed out of the spotlight, with the exception of Sly and the Family Stone's 1993 Rock and Roll Hall of Fame induction.

More than a decade later, Sly Stone re-emerged with an unexpected and quirky performance at the 2006 Grammy Awards, during which he abruptly left the stage in the middle of a performance of "I Want to Take You Higher." A couple of years later, he and a few of his family members reunited for a show in Las Vegas.

Stone then made headlines in 2010, when he sued his former manager, Jerry Goldstein, claiming that Goldstein had stolen up to $30 million in royalties from Sly and the Family Stone. Though a jury would rule in Stone's favor, due to the details of his contract, he was never able to collect. The following year, Stone released a comeback album titled I'm Back! Family & Friends. The musician was reportedly living in a van in Los Angeles following the album's release. Since that time he has made sporadic appearances at live events.