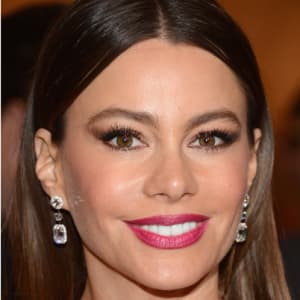 Sofia Vergara is known for her Emmy-nominated role as Gloria Delgado-Pritchett on ABC’s ‘Modern Family,’ which premiered in 2009. She has starred in film projects as well, including ‘Meet the Browns,’ ‘Happy Feet Two,’ ‘Fading Gigolo’ and ‘Chef.’

Born in Barranquilla, Colombia on July 10, 1972, Sofia Vergara worked as a model before relocating to the U.S. and becoming a highly-regarded TV host of programs on Univision. She started acting in films at the start of the new millennium and became a household name years later for her role as Gloria Delgado-Pritchett on the hit sitcom Modern Family, with the actress earning consecutive Emmy and Golden Globe nominations. Additional projects have included Happy Feet Two, The Smurfs and Chef.

Sofía Vergara was born in Barranquilla, Colombia on July 10, 1972 to a large family, learning English at a bilingual elementary school and eventually studying dentistry. Yet as a teen Vergara was discovered on a beach by a photographer, and got her start on screen doing a Pepsi commercial for the Latin American markets, later working as a model and also starring in a Mexican telenovela.

Vergara would go on to become an Univision television personality in the mid-1990s after she relocated to the United States, hosting the travel show Fuera de Serie and then the variety show A Que No Te Atreves. She had also caught the attention of English-language audiences with a short, captivating turn in the 1995 American Comedy Awards. By the end of the decade, the formidable Vergara had received the Hispanic Woman of the Year award. Yet tragedy had struck during this time as well, as Vergara's brother was killed by gunfire in her home country in 1996.

In the early 2000s, Vergara became known as a film actress following her debut in 2002's Big Trouble, starring alongside Tim Allen and Rene Russo. 2003's Chasing Papi came next, in which Vergara plays one of Thomas Fuentes' three girlfriends. By the end of the decade, in addition to doing TV work here and there, she had also starred in two films that directed by Tyler Perry—Meet the Browns and Madea Goes to Jail, in 2008 and 2009, respectively. Also in 2009, the actress debuted on the Broadway stage, playing Mama Morton in Chicago, and began her role as the sexy and assertive Gloria Delgado-Pritchett, wife of Jay (Ed O'Neil), on the ABC sitcom Modern Family.

Vergara has continued to be a comedy contender on the big screen as well. In 2011, she co-starred in The Smurfs and voiced the role of Carmen in Happy Feet Two—a sequel to the original 2006 Warner Bros. film. She was seen winding up the year as part of the ensemble cast of New Year's Eve. Later projects have included the over-the-top action flock Machete Kills (2013) as well as art-house projects Fading Gigolo (2013) and Chef (2014), with the latter directed by and co-starring Jon Favreau.

Pursuing other business ventures outside of the entertainment world, the actress launched her own Kmart clothing line in 2011, as well as a fragrance and jewelry collection in 2014.

Sofia Vergara was married to childhood sweetheart Joe Gonzalez and they have a son, Manolo, who was born in 1992. The couple divorced in 1993. In July 2012, Vergara became engaged to Nick Loeb, a New Yorker and film production company co-owner. The couple called it quits however in May 2014.

Vergara found herself in the midst of a legal battle with Loeb in 2015. Loeb sued her over control of frozen embryos created by the pair when they were a couple. He claims that she was going to destroy them, but she denies this accusation. In a statement to People magazine, her attorney said that "Vergara . . . is content to leave the embryos frozen indefinitely."

Following the breakup, Vergara began dating True Blood and Magic Mike hunk Joe Manganiello that summer. In December 2014, Vergara and Manganiello announced their engagement. That same month during an appearance on Jimmy Kimmel Live, she revealed that she had obtained American citizenship. Vergara married Manganiello on November 22, 2015 in Palm Beach, Florida.

In 2000, an endocrinologist discovered a lump in Vergara’s neck and she was diagnosed with thyroid cancer. Since then she has had surgery and radiation therapy and takes medication daily to control her metabolism. Vergara also created a foundation to help families in Colombia cope with cancer.