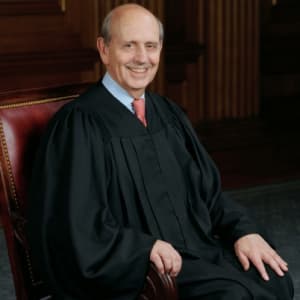 Stephen Breyer is an associate justice for the U.S. Supreme Court, who was nominated by President Bill Clinton.

Born on August 15, 1938, in San Francisco, California, Stephen Breyer attended Harvard Law School. He went on to teach law for more than two decades at his alma mater, and served as assistant prosecutor during the Watergate hearings. He was nominated to the Supreme Court by President Bill Clinton and sworn in on August 3, 1994. He authored the 2010 book Making Our Democracy Work.


Stephen Gerald Breyer was born on August 15, 1938, in San Francisco, California. His father Irving was legal counsel for the San Francisco Board

of Education and his mother Anne volunteered for the League of Women Voters. Influenced by his parents, the future justice developed an understanding of the importance of public service.

Displaying a formidable intellect at an early age, Breyer was known as the "troop brain" among his fellow Eagle Scouts. He joined the debate team at Lowell High School

in San Francisco, and was voted "most likely to succeed" upon graduating in 1955.

After earning his undergraduate degree in philosophy from Stanford University in 1959, Breyer attended Oxford University's Magdalen College as a Marshall Scholar. He

for Antitrust. In 1967, he embarked on a lengthy tenure as a law professor at Harvard.

After serving on the Watergate Special Prosecution Force, Breyer in 1973 was appointed special counsel to the Senate Judiciary Committee, where he earned accolades for

his bipartisan efforts to deregulate the airline industry. At the end of the decade he became the Judiciary Committee's chief counsel.

The lone judicial appointment of outgoing President Jimmy Carter to be confirmed by the Senate, Breyer took office as a judge of the U.S. Court of Appeals

for the First Circuit in December 1980. He joined the U.S. Sentencing Commission in 1985, and in 1990 he was named chief judge of the Court of Appeals and a member of

the Judicial Conference of the United States.


Initially considered for a seat on the Supreme Court upon the retirement of Byron White in 1993, Breyer instead waited another year to earn President Bill Clinton's

nomination as a replacement for Harry Blackmun. Following a week of hearings, he was approved by the Senate by a vote of 87 to 9 and assumed his position as associate
justice on August 3, 1994.

As the high court's junior justice for a near-record 11 1/2 years, Breyer developed a reputation for his pragmatism. Often in opposition to the originalist views of

Justice Antonin Scalia, he championed an interpretation of the Constitution as a "living" document that required consideration of contemporary issues. As such, he

penned a dissent in the 2008 case District of Columbia v. Heller, which ruled that the Second Amendment protects the right of individuals to keep and bear firearms

Breyer occasionally sides with his conservative colleagues, most notably in a 2014 decision that upheld a Michigan constitutional amendment that bans affirmative

action in admissions to the state's public universities. However, he often allies with the court's liberal wing, as he did with the 2015 rulings that upheld the

federal tax subsidies of the Affordable Care Act and the constitutional right for same-sex marriage.

they have three children.

The justice has several interests outside of law, including cooking and bicycling. He was involved in a serious bike accident while under consideration for the Supreme

Court in 1993, and met with President Clinton despite recovering from a punctured lung and several broken ribs.

Considered one of the best writers in the federal court system, Breyer has authored several books about federal regulation. More recently, he explained his judicial

philosophies in his 2005 tome, Active Liberty: Interpreting Our Democratic Constitution, and in his 2010 book, Making Our Democracy Work: A Judge's View.