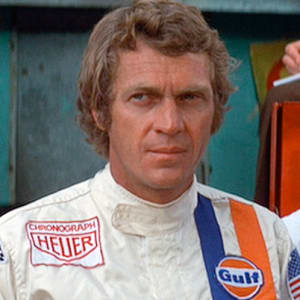 Steve McQueen was one of the most popular and successful film actors of the 1960s and ’70s. He starred in such features as ‘The Great Escape,’ ‘Bullitt’ and ‘The Getaway.’

Who Was Steve McQueen?

Terrence Steven McQueen was born on March 24, 1930, in Beech Grove, Indiana. He barely knew his father, William, who abandoned Steve and his mother, Julian, when he was only a few months old. More interested in her own life, Julian soon left Steve in the care of his great-granduncle Claude Thompson. He stayed with his great-granduncle on his farm in Slater, Missouri, for many years, seeing his mother from time to time.

When McQueen was around 12 years old, he reunited with his mother after she remarried. They eventually moved to Los Angeles, California, where he became involved with local gangs. He got caught stealing hubcaps from cars twice and eventually landed in reform school, the California Junior Boys Republic in Chino.

McQueen initially struggled in this new environment, frequently breaking the rules and even escaping several times, before befriending a staff member and settling down. He later believed that the experience changed his life, saying, "I would have ended up in jail or something. I was a wild kid," according to My Husband, My Friend, by McQueen's first wife, Neile McQueen Toffel.

McQueen agreed to join his mother in New York City in 1946, but upon arriving there he found out that his mother had put him up in another apartment, instead of letting him live with her. McQueen soon took off, joining the Merchant Marines for a short time aboard the SS Alpha. The job didn't work out either, and he left the ship while it was docked in the Dominican Republic.

Before making his way back to the United States, McQueen worked in a brothel as a towel boy for a time. He returned home and began a series of odd jobs around the country, including working on oil rigs and in a carnival. In 1947, McQueen enlisted in the U.S. Marine Corps and became a tank driver. Showing his rebellious streak, he ended up in the brig for extending a weekend pass into a two-week holiday. McQueen was far from the model soldier: "I was busted back down to private about seven times. The only way I could have been made corporal was if all the other privates in the Marines dropped dead," he said, according to Marshall Terrill's Steve McQueen: Portrait of an American Rebel.

After being discharged from the Marines in 1950, McQueen spent some time in Myrtle Beach, South Carolina, and Washington, D.C., before returning to New York City. He hung out in the Greenwich Village neighborhood, a Bohemian enclave. For a time, McQueen seemed aimless, moving and changing jobs frequently. He discovered his calling with the help of a girlfriend who was also an aspiring actress. With support from the G.I. Bill, McQueen in 1951 enrolled at the Neighborhood Playhouse, run by Sanford Meisner.

McQueen's first role as an actor was a bit part in a Yiddish theatrical production; he only had one line and was cut from the show after four nights. Despite this setback, it was apparent that McQueen had talent, and he won a scholarship to study at the Uta Hagen-Herbert Berghof School in 1952. A few years later, McQueen was accepted to the prestigious Actors Studio, where he studied with Lee Strasberg.

In 1956, McQueen was involved in his sole Broadway production, taking over the leading role of junkie Johnny Pope from Ben Gazzara in A Hatful of Rain. That year he also had a small part in the feature Somebody Up There Likes Me (1956), which starred Paul Newman. He felt a rivalry with Newman, a fellow member of the Actors Studio.

McQueen experienced his first taste of stardom in 1958 with the lead role of Steve Andrews in the sci-fi film The Blob, which became a cult classic. That year he also headlined the television Western Wanted—Dead or Alive as bounty hunter Josh Randall. The show became a big hit, and McQueen started to attract more attention from Hollywood.

In 1959, McQueen starred in the crime drama The Great St. Louis Bank Robbery, and also appeared with Frank Sinatra in the war drama Never So Few. Around this time, he discovered a passion for race-car driving. McQueen was already a longtime fan of motorcycles.

In 1960, McQueen had a leading role in the Western The Magnificent Seven, with Yul Brynner and Charles Bronson. His television show ended shortly afterward, giving him the opportunity to take on more film roles. With 1963's The Great Escape, McQueen earned top billing, showing the world that he was a bona fide movie star.

'Bullitt' and Other Hits

More box office hits followed, including the gambling drama The Cincinnati Kid (1965) and the Western Nevada Smith (1966). McQueen received his only Academy Award nomination for his work on the military drama The Sand Pebbles (1966), playing a Naval engineer stationed on a gunboat in China during the 1920s. He then scored another success with the romantic crime caper The Thomas Crown Affair (1968), with Faye Dunaway as his love interest.

That same year, McQueen made waves as a San Francisco cop in Bullitt, particularly for his part in one of cinematic history's most celebrated car chases. Along that vein, he tried to tap into his love of car racing in 1971's Le Mans, with only limited success. In an effort to have more creative control, McQueen formed First Artists Productions with Barbra Streisand, Sidney Poitier, Paul Newman and Dustin Hoffman that same year.

Turning to more weighty material, McQueen had better success as the title character of Junior Bonner (1972), a well-received family drama directed by Sam Peckinpah. That year he also starred in The Getaway, with Ali MacGraw. McQueen went on to garner accolades for his performance in the prison drama Papillon (1973), opposite Dustin Hoffman, and played a hero in the disaster epic The Towering Inferno (1974).

As his career progressed, the actor's personal demons began to eclipse his talent. Separated from his first wife, Neile, with whom he had children Chad and Terry, McQueen struck up a romance with MacGraw while filming The Getaway. The affair ignited a scandal, as the actress was married to film executive Robert Evans at the time, but McQueen and MacGraw married in 1973. Their relationship grew increasingly stormy, fueled in part by McQueen's use of alcohol and drugs, until their divorce in 1978. Both of his ex-wives later stated that the actor could be physically abusive and was often unfaithful.

Returning to the big screen in 1978, McQueen starred in An Enemy of the People, based on the play by Henrik Ibsen. He was almost unrecognizable in the film with his long hair, beard and heavier physique, and audiences did not know what to make of their action hero's portrayal of a scientist fighting against pollution. After this project failed at the box office, McQueen returned to more familiar character types. He starred in the Western Tom Horn (1980) and the action-thriller The Hunter (1980).

By this time, McQueen was terribly ill. He had been experiencing flu-like symptoms and respiratory problems for a while, before an X-ray taken in late 1979 showed that he had a tumor in his right lung. The doctors said that his type of cancer stemmed from exposure to asbestos and was known to be aggressive and terminal. A short time after receiving this diagnosis, McQueen married model Barbara Minty in January 1980.

McQueen spent the final months of his life in a clinic in Mexico, seeking alternative therapies for his cancer. He died on November 7, 1980, in Ciudad Juarez, Mexico, after undergoing surgery to remove several tumors. MacGraw once described McQueen as a "combination of farm boy and street tough," and it was this unique mixture that helped him leave an indelible impression on the big screen.

McQueen made headlines posthumously in 2013, when his 1952 Chevy pickup truck—the last vehicle he ever drove—hit the auction block. At the time of his death, the actor, a longtime car and motorcycle enthusiast, reportedly owned more than 60 classic/rare vehicles. Four years later, McQueen's Porsche 917 and racing suit from Le Mans also went up for sale.

In 2017, Pastor Greg Laurie explored the little-known religious side of the actor in his book Steve McQueen: The Salvation of an American Icon. The book was accompanied by a documentary, released later that year.