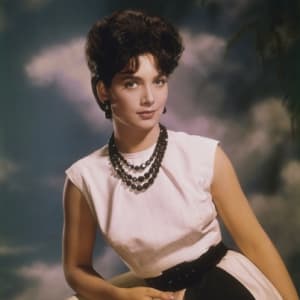 Suzanne Pleshette was an Emmy Award-nominated actress known for roles in films like The Geisha Boy and The Birds, as well as the television series The Bob Newhart Show.

Born on January 31, 1937, in Brooklyn, New York, Suzanne Pleshette made her film debut in Jerry Lewis's The Geisha Boy and later starred as a schoolteacher in The Birds. She forged a career on Broadway with productions like Compulsion and The Miracle Worker and went on to star on television's The Bob Newhart Show, for which she earned two Emmy Award nominations, as well as on Will & Grace. She died in Los Angeles, California, on January 19, 2008.

Suzanne Pleshette was born on January 31, 1937, in Brooklyn, New York. Her father, Eugene Pleshette, was a stage manager, network executive and manager of the Paramount Theater in Brooklyn during the big band era. Her mother, under the stage name "Geraldine Rivers," was an artist and dancer.

Pleshette began her acting career on the stage in the 1950s after attending New York's High School for the Performing Arts and Syracuse University. She then moved into film and TV roles, often getting parts because of her husky voice. In 1958, Pleshette appeared on Broadway with Maureen Stapleton and Eli Wallach in the play The Cold Wind and the Warm. She also made her film debut that year with Jerry Lewis in The Geisha Boy.

In 1961, she was nominated for an Emmy Award for her appearance as Julie Lawler on the TV show Dr. Kildare. Pleshette also appeared in numerous TV shows, including Have Gun Will Travel, Playhouse 90 and Alfred Hitchcock Presents.

She also replaced Anne Bancroft in the role of Annie Sullivan in The Miracle Worker, opposite Patty Duke as Helen Keller in 1961. After receiving excellent reviews, she toured extensively in the role.

Pleshette got a big break on film in 1963 when Alfred Hitchcock cast her in The Birds. The Golden Globes named her "Best Female Newcomer." She also performed in about two dozen other films, including Disney movies such as The Ugly Dachshund, Blackbeard's Ghost and The Adventures of Bullwhip Griffin.

Pleshette was the producers' original choice for the role of Catwoman on the 1966 TV show Batman. When negotiations broke down, the part went to Julie Newmar.

But it was her role as Emily Hartley that brought her the most acclaim, including two Emmy nominations. Pleshette played a schoolteacher to Bob Newhart's psychologist character in The Bob Newhart Show. The situation comedy revolved around their careers and off-beat friends, as well as Bob's patients. The married couple was childless, a novelty at the time in television. The highly rated show ran from 1972 to '78.

Pleshette was also nominated for an Emmy and a Golden Globe for her role as Leona Helmsley in the TV-movie Leona Helmsley: Queen of Mean (1990). She also appeared on the sitcoms Will & Grace and 8 Simple Rules.

Pleshette was married three times. First up was actor Troy Donahue on January 4, 1964, her co-star in Rome Adventure (1962). They divorced only eight months later. On March 16, 1968, she married businessman Thomas Joseph Gallagher III. He died on January 21, 2000.

In December 2000, Pleshette announced her engagement to actor Tom Poston, 79. They had met back in 1959 while they were in the Broadway comedy The Golden Fleecing. Each had also worked with Bob Newhart. Poston made guest appearances as Newhart's college buddy, Cliff "The Peeper" Murdock, on The Bob Newhart Show in the 1970s and also had a recurring role as handyman George Utley in Newhart (1982-90). Pleshette had appeared in the Newhart finale (now considered a classic), when, back in her role as Emily Hartley, she rolled over in bed, revealing to Newhart that the whole show (1982-1990) had been a dream.

Pleshette and Poston married on May 11, 2001. In August 2006, Pleshette underwent chemotherapy treatment for lung cancer at Los Angeles' Cedar-Sinai Medical Center. In September 2007, Pleshette attended a 35th reunion of the cast of the 1970s Bob Newhart Show in a wheelchair, just four days after leaving the hospital after battling pneumonia. "I never thought I'd be here tonight," said Pleshette.

A year later, on January 19, 2008, Pleshette's battle with health complications finally caught up with her. She died of respiratory failure at her Los Angeles, California, home.