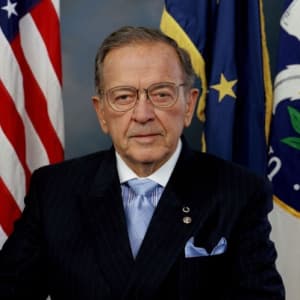 Alaska’s Ted Stevens was an attorney and Republican politician who served in the U.S. Senate for four decades.

Born in Indianapolis, Indiana, on November 18, 1923, Ted Stevens practiced law in Alaska and was elected to the state legislature before being appointed to the U.S. Senate in 1968, to fill a vacancy. He won multiple re-elections on the Republican ticket, serving for decades. Stevens was convicted in court over a financial scandal, but the ruling was overturned. He died in a plane crash in Aleknagik, Alaska, on August 9, 2010.

Ted Stevens was born Theodore Fulton Stevenson November 18, 1923, in Indianapolis, Indiana. The third of four children, Stevens's father, George, was an accountant before the stock market crashed in 1929. His parents soon divorced and eventually sent him to live with his aunt in Redondo Beach, California. After graduating from high school in 1942, Stevens attended Oregon State University for a semester, studying engineering.

Stevens left college to serve in World War II, flying with the Army Air Corps from 1943 to 1946. He flew C-46s in Asia in support of the Flying Tigers and earned several medals, including a Distinguished Flying Cross and an Air Medal. After the war, Stevens received a bachelor's degree in political science from University of California, Los Angeles in 1947 and graduated from Harvard Law School in 1950.

Stevens worked in the Washington, D.C., law offices of Northcutt Ely and was eventually assigned to handle the legal affairs of Emil Usibelli, the founder of Usibelli Coal Mine in Healy, Alaska. Stevens was later offered a job in Fairbanks with Usibelli's Alaska attorney, Charles Clasby.

After stints in the U.S. Justice and Interior departments, Stevens was elected as a state representative in 1964. He was re-elected in 1966, serving as House Majority Leader. He was appointed to the U.S. Senate on December 24, 1968, as a Republican to fill the vacancy caused by the death of Democrat E. L. “Bob” Bartlett. Stevens then won the seat in a special election in 1970.

Re-elected in 1972, 1978, 1984, 1990, 1996 and 2002, Stevens rose to the office of president pro tempore of the Senate, third in line for the presidency (behind the Vice President and Speaker of the House) in 2003. He was replaced four years later by Robert Byrd after Democrats took back control of the Senate.

Though affectionately nicknamed "Uncle Ted," Stevens was known for his temper. He was also known for championing "Bridge to Nowhere," a $400 million pork transportation project designed to link two relatively uninhabited islands.

Stevens married Ann Cherrington in 1952. They had five children together. In 1978, the couple were passengers in a Learjet that crash-landed at Anchorage International Airpor. Ann was killed, but Stevens was one of two survivors. Following months of recovery, Stevens married his second wife, Catherine Chandler, in 1980. They have one daughter.

In 2000, he was named "Alaskan of the Century" and the Alaska Legislature passed a bill to rename the airport in Anchorag as Ted Stevens International Airport.

On July 29, 2008, Stevens was indicted on seven counts of making false statements on his Senate financial forms, according to a 28-page federal grand jury indictment. He had been under investigation to determine whether he had arranged a government contract for an Alaska-based energy company that helped renovate his vacation house in Alaska a few months later. The FBI and IRS raided his home in July 2007 to search for evidence. Prosecutors said Stevens received more than $250,000 in gifts and services from VECO Corp. and its executives and that he concealed "his continuing receipt of hundreds of thousands of dollars worth of things of value from a private corporation" from May 1999 to August 2007. The indictment, however, did not allege bribery, which "requires proof of a specific quid pro quo." Stevens, who was allowed to turn himself in to avoid arrest, has adamantly denied any wrongdoing.

Stevens died on August 10, 2010, at age 86, in a fatal plane crash in the remote Alaskan village of Aleknagik. The cause of the accident is unknown.