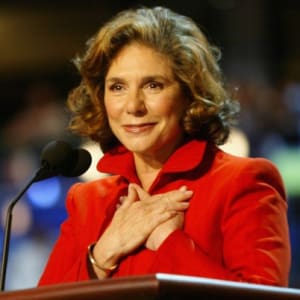 Teresa Heinz Kerry has had a varied career as a U.N. translator, a noted philanthropist, the widow of U.S. Senator H. John Heinz III and the wife of one-time presidential nominee John Kerry.

Teresa Heinz Kerry was born on October 5, 1938, in Lourenço Marques (now Maputo), Mozambique, becoming fluent in five languages and working as a U.N. interpreter. After the death of her first husband H. John Heinz in 1991, she headed the Heinz company fortune and helmed its related philanthropic endeavors. In 1995, she married Senator John Kerry and supported him in his 2004 presidential campaign, becoming a non-traditional media figure.

Future philanthropist Teresa Heinz Kerry was born Maria Teresa Thierstein Simes-Ferreira on October 5, 1938, in Lourenço Marques (now Maputo), Mozambique, as part of the Portuguese colonial community. Teresa received her bachelor's degree from the University of the Witwatersrand in South Africa in 1960 and graduated from the Interpreters School at the University of Geneva three years later. Fluent in English, Spanish, French, Italian and Portuguese, she moved to the United States and got a job working as a translator for the Trusteeship Council of the United Nations.

In 1966, Teresa married her college sweetheart, Republican Senator Henry John Heinz III of Pennsylvania, with whom she has three sons. Shortly after celebrating their 25th wedding anniversary in 1991, Senator Heinz was killed in a helicopter crash.

After her husband's death, Teresa turned down offers to seek election to her husband's Senate seat. She instead became heir to the Heinz Ketchup fortune and chairman of The Howard Heinz Endowment and the Heinz Family Philanthropies, one of the nation's large private foundations. Under her leadership, the foundation has helped channel money to organizations focused on health care, early childhood education and the arts. Then, in 1996, she established the Women's Institute for a Secure Retirement to educate women about pensions, savings and retirement security.

In 2003, Teresa received the Albert Schweitzer Gold Medal for Humanitarianism for her work to protect the environment and promote health care and education around the world.

Teresa was first introduced to her second husband, Massachusetts Senator John Kerry, by Senator Heinz at an Earth Day rally in 1990. In 1992, she met Kerry again at the Earth Summit in Rio de Janeiro. The couple wed in Nantucket, Massachusetts in 1995. Years later, in 2004, Teresa supported her husband during his campaign for the U.S. presidency, which he lost to President George W. Bush.

Teresa made news by sharing viewpoints and experiences in a candid, forthright fashion that defied traditional expectations over how a potential first lady should express her opinions. She was also noted to have been dubbed "Dr. T" by associates due to her health-consciousness and the advice she would give to Kerry and friends.

She and Kerry have resided in Boston, Massachusetts, and also have homes in Ketchum, Idaho; Nantucket, Massachusetts; Fox Chapel, Pennsylvania; and Georgetown, Washington, D.C.

Teresa Heinz Kerry was diagnosed with breast cancer in September of 2009. After asking questions of her physician and exploring what options were available to her, she received treatment later that year, undergoing a series of lumpectomies and eventually being given a cancer-free bill of health. She was public about the experience, doing an interview with Robin Roberts of Good Morning America, to encourage women to receive mammograms and promote awareness of the disease.

Kerry was eventually confirmed in January of 2013 to be the U.S. secretary of state under President Barack Obama's administration. Later that year, on July 7, Teresa fell ill, allegedly suffering a seizure while staying at a family vacation home. She was taken to Nantucket Cottage Hospital where her condition was upgraded to fair by the following morning.