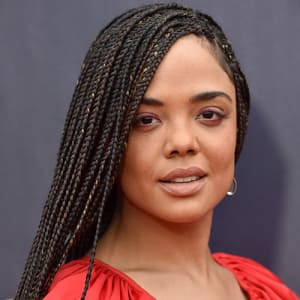 Tessa Thompson is an American film and TV actress who is best known for her roles in ‘Veronica Mars,’ ‘Creed,’ ‘Thor: Ragnarok’ and HBO’s ‘Westworld.’

Who Is Tessa Thompson?

Born in 1983, Tessa Thompson is an American film and TV actress who's played characters as diverse as her background. Originating from African, Panamanian, Mexican and European descent, Thompson has been able to avoid being typecast — playing anything from compassionate protagonist to ruthless antagonist to wild, untethered superhero. She became better known to mainstream film audiences in 2015's Rocky spin-off Creed, followed by the superhero flick Thor: Ragnorak (2017) and the sci-fi horror film Annihilation (2018). On the small screen, she made an early splash as Jackie Cook in Veronica Mars in 2005, and made an even bigger impression as the cutthroat Charlotte Hale on HBO's Westworld, which premiered in 2016.

Thompson began appearing in films in 2006, but she landed one of her more prominent roles in Tyler Perry's film adaptation For Colored Girls in 2010, playing Nyla Adrose (aka Lady in Purple). From there she would appear in 2014's award-winning dramedy Dear White People (which would later become adapted into a Netflix series) and in Ava Duvernay's historical drama Selma (2014), playing Civil Rights Movement activist Diane Nash.

The following year, Thompson would star in the Rocky spin-off and sequel Creed (2015), as a chanteuse and love interest of Michael B. Jordan's character, but she dove into more edgy and otherworldly fare as the beer-guzzling fictional superhero Valkyrie in Thor: Ragnorak (2017).

Unlike the original superhero's Norse mythological roots, Thompson was able to reinvent Valkyrie as a woman of color and make the character her own.

Discussing the changes to her Marvel character, Thompson had this to say during an interview with CBR.com: "We had lots of conversations about diversity and inclusion. It shouldn’t all be rhetorical. I think it’s important the films that we make reflect the times that we live in, to realize that big movies have the power to also shift culture. I think it’s really great that young comic book readers that look like me can see themselves in a film. I think it’s about time."

In 2018 Thompson continued delving into the world of fantasy, but this time in the sci-fi horror genre Annihilation, which also starred an all-female led cast including Natalie Portman, Gina Rodriquez and Jennifer Jason Leigh. That same year, she also starred in the sci-fi comedy Sorry to Bother You, opposite Get Out actor Lakeith Stanfield.

Some of Thompson's upcoming projects include Creed II and MIB, the spinoff to Men in Black.

From 2005 to 2006, Thompson played a major role in the second season of the CW's Veronica Mars as Jackie Cook, the love interest of Wallace Fennel. Despite the show's fans not receiving her character well, it brought Thompson into the spotlight and helped her become more conscientious of pursuing multi-dimensional roles.

"The fan reaction was intense, because Jackie was not very pleasant to Veronica, and of course she’s our hero," Thompson told Vanity Fair in 2017. "I think the writers, in an attempt to redeem Jackie and also make a compelling case for me to stick around, wanted to kind of soften her. As a result, she had a really fascinating character arc."

She added: "Veronica Mars definitely primed me to look for surprising, dynamic women. It took me awhile to realize how cool that job was."

After Veronica Mars, Thompson continued to appear in other major television shows like Grey's Anatomy, Private Practice, Heroes and Detroit 1-8-7.

From 2012 to 2013, Thompson had a recurring role in ABC's supernatural drama 666 Park Avenue and played the main character Sara Freeman in the BBC's original period drama Copper.

As Thompson's star has continued to rise, most notably on the big screen, her television roles have also gotten all the more impressive: beginning in 2016, she plays the merciless board director Charlotte Hale in HBO's hit sci-fi drama Westworld.

"With Hale, I really relinquish myself of any sort of responsibility to make her likable," Thompson confessed about her character. "I feel like so often with men in a professional space, it’s not about being liked. It’s about being respected."

In June 2018, Thompson publicly announced that she was bisexual.

“I can take things for granted because of my family – it’s so free and you can be anything that you want to be," she told PorterEdit. "I’m attracted to men and also to women. If I bring a woman home, [or] a man, we don’t even have to have the discussion.”

She has also opened about her relationship with pop singer Janelle Monáe.

“We love each other deeply,” she said. “We’re so close, we vibrate on the same frequency. If people want to speculate about what we are, that’s okay. It doesn’t bother me.”

Tessa Lynn Thompson was born on October 3, 1983 in Los Angeles. Her African-Panamanian father, Marc, is a singer/songwriter for a musical collective, while her mother comes from Mexican-European descent. Thompson's parents split up when she was a toddler, and she divided her time between Los Angeles and New York, where her father resided. Thompson also has a sister.

Thompson graduated from Santa Monica College with a degree in cultural anthropology.