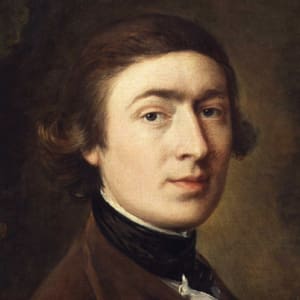 Thomas Gainsborough, an 18th century English painter known for his evocative portraiture and landscapes, is most famous for the portrait known as The Blue Boy.

Painter Thomas Gainsborough, baptized in Sudbury, England, on May 14, 1727, showed an early talent for drawing, which his weaver father encouraged him to pursue. Though famous painters like Hogarth and van Dyck were influences, he favored landscapes, becoming a master of light and brushwork, but when Gainsborough shifted to portraiture for income, his talent attracted the likes of King George III and other nobles, and made him a contender for the position of royal painter. When elected a founding member of the Royal Academy, he moved his studio to London. Perhaps his most famous work is a portrait known as The Blue Boy. Gainsborough died on August 2, 1788, in London.

Thomas Gainsborough was one of nine children born to John Gainsborough, a weaver and woolen merchant, in Sudbury, in Suffolk, England. He was born in the spring of 1727 and christened on May 14. Perhaps due to his mother's penchant for painting flowers and encouraging her son's talent with a pencil, Gainsborough assembled a rather impressive portfolio at a young age. By 10, he had drawn some local village landscapes, and added caricatures and other facial studies.

His father was sufficiently impressed with his work to allow him to go to London, England, where he studied at an academy in St. Martin's Lane under the renowned William Hogarth and other masters known for etching, historical painting and portraiture.

During this time he fell in love with Margaret Burr, the illegitimate daughter of a nobleman, and her dowry allowed him to set up a studio in Ipswich by the time he was 20.

When his landscapes were not selling, Gainsborough turned to portraiture for money. He moved his wife and two daughters to Bath, where there was a more bustling influx of upscale clientele, and set to studying the painter Sir Anthony van Dyck for insight into technique.

His reputation began to grow. Sending his portraits to the Society of Arts exhibitions in London (his Ipswich friend Joshua Kirby was president), especially those of his more prominent sitters, helped attract attention to his work.

Gainsborough's increasing prosperity allowed him to indulge his passion for music. He learned to play the viol di gamba (a fretted string instrument), the harp and the hautboy (oboe), among other instruments, and employed a houseful of international musicians. Perhaps because of his lively nature, the tall, handsome and garrulous Gainsborough enjoyed spending time with theater folk. He painted celebrated actors such as David Garrick and Sarah Siddons, and also lesser known players, gifting his portraits to them, as well as sketches and landscapes.

By 1774, he had become so successful, it was silly not to be in London. He was one of the founding members of the Royal Academy, and not long after moving his family to the capital, he was summoned to the palace and began portraits of King George III and other nobles. Although the king was obliged to name his rival, Joshua Reynolds, as the official court painter, Gainsborough remained the favorite of the royal family.

Thomas Gainsborough died of cancer on August 2, 1788, at the age of 61. He requested to be buried at St. Anne's Church at Kew, which was the royal family's primary residence and known for its lush and varied landscape. It was a fitting locale, since Gainsborough had returned to his love of landscape painting in his waning years and become known for his simple settings, elegant brushwork and extraordinary use of light.

And yet, Gainsborough's most recognizable painting today is probably a portrait of the son of a wealthy merchant, known simply as The Blue Boy. Legend has it that Gainsborough tried to reconcile with Reynolds, his rival, at his deathbed. The two share a reputation as the most famous portraitists of the latter 18th century. Gainsborough is also known one of the originators of the 18th century British landscape school. A later painter with a similar reputation, John Constable, was a huge fan, saying of Gainsborough's landscapes, "On looking at them, we find tears in our eyes and know not what brings them."