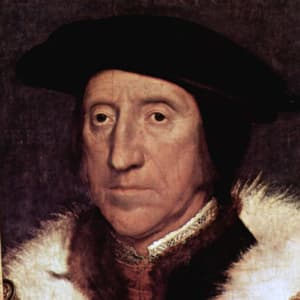 Thomas Howard, 3rd Duke of Norfolk, was an influential English noble and politician during the early 1500s. He was accused of treason in 1546, but narrowly escaped execution due to the death of King Henry VIII.

Thomas Howard, 3rd Duke of Norfolk, was a powerful English noble and Tudor politician in the first half of the 1500s. In May of 1513, he became lord high admiral and lord deputy of Ireland in 1520. In 1536 he gained royal favor by successfully suppressing the rebellion of Roman Catholics in Northern England, in what was known as the Pilgrimage of Grace. In 1546, he was accused as an accessory to treason committed by his son, Henry Howard, earl of Surrey. He narrowly avoided execution after the death of Henry VIII and in 1553 he was released and his dukedom was restored. He played a role in the marriages of his two nieces, Anne Boleyn and Katherine Howard, both wives of King Henry VIII.