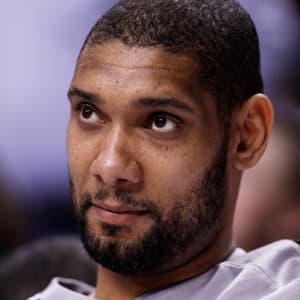 Basketball player Tim Duncan has led the San Antonio Spurs to multiple championships and is widely hailed as one of the greatest power forwards in NBA history.

Famed basketball player Tim Duncan was born on St. Croix, in the U.S. Virgin Islands, in 1976. Despite waiting until his freshman year of high school to play basketball, Duncan was recruited by Wake Forest, where he became one of the Demon Deacons' best players. In the 1997 NBA draft, the San Antonio Spurs selected Duncan with the team's first overall pick. He's gone on to lead the team to five championships. After 19 seasons, he announced his retirement in 2016.

Hailed as one of the best power forwards in NBA history, Timothy Theodore Duncan was born on April 25, 1976, on St. Croix in the U.S. Virgin Islands. The youngest of William and Ione Duncan's three children, and their only boy, Tim devoted his early athletic years to swimming, a sport in which he became the top U.S. competitor in his age group in the 400-meter freestyle.

But following the onslaught of Hurricane Hugo in 1989, which destroyed his team's pool, and then the death of his mother shortly thereafter, Duncan quit swimming.

During his freshman year of high school, Duncan began playing basketball. By his senior year, Duncan had grown nine inches and improved his game significantly, to the point where colleges started scouting him.

In the fall of 1993, Duncan enrolled at Wake Forest University in Winston-Salem, North Carolina, where he went on to earn a degree in psychology. There, the lanky forward quickly adapted to the college game and in his junior year was named an All-American. His senior year of 1996-97 proved even better. Duncan again was named an All-American as well as the NCAA Player of the Year.

That spring, the San Antonio Spurs selected Duncan with the first overall pick in the 1997 National Basketball Association draft.

Teamed with center David Robinson, who'd missed the 1997 season due to injury, Duncan quickly transformed the Spurs into a championship contender. During his rookie year, the power forward averaged 21.1 points and 11.9 rebounds, on his way to winning the NBA's Rookie of the Year award.

The following year, Duncan proved even more dominant and helped lead the Spurs to the 1999 title, San Antonio's first as a franchise. During the championship series against the New York Knicks, Duncan averaged in 27.4 points and 14 rebounds per game to earn the Finals MVP.

Even as his teammate David Robinson slowed down, Duncan continued to keep the Spurs as perennial contenders. In 2002 and 2003 he was named the NBA's Most Valuable Player, while also leading San Antonio to the 2003 title and collecting the Finals MVP award. Three more championships followed, in 2005, 2007 and 2014.

While his game and personality aren't as splashy as some of his rivals, most notably Shaquille O'Neal, the power forward has earned the respect of coaches and players throughout the NBA.

"He's probably the best player to ever play the position the way he plays it," former Utah Jazz coach Jerry Sloan has said.

Longtime San Antonio coach Gregg Popovich has echoed the sentiment, all the while lauding Duncan for his leadership qualities. "He may be a 7-footer, but he's basically a quarterback in shorts," he has said.

Duncan announced his retirement in July 2016. In his career, he'd completed 19 seasons, won five championships, was a two-time MVP and played in 15 All-Star games.

Tim Duncan married his college sweetheart, Amy, in 2001. The couple were married 12 years before calling it quits in 2013. They have a son and a daughter together.

Off the court, Duncan is an active community member. The Tim Duncan Foundation, which Amy Duncan heads, promotes health, education and recreation causes that improve the lives of young children in San Antonio, Winston-Salem and St. Croix.

In addition, Duncan supports a host of other social programs in San Antonio, including the Children's Bereavement Center and the Cancer Therapy and Research Center.