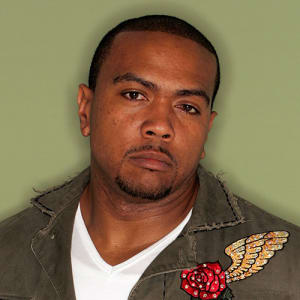 Timbaland is a rapper and music producer known for smash hits like “Cry Me a River,” “4 Minutes,” “The Way I Are” and “Give It to Me.”

Timothy Mosley, better known as Timbaland, was born in the early 1970s in Norfolk, Virginia. Early into his career, he worked as part of the rapping duo Timbaland and Magoo, who released their debut album in 1997. Timbaland also served as a hit-making producer for a number of R&B acts that included Aaliyah and Missy Elliott. He's gone on to craft hits for artists across a variety of genres, including Nelly Furtado, Justin Timberlake and Madonna, and work as executive music producer for the hit TV series Empire.

Timbaland was born Timothy Zachery Mosley in Norfolk, Virginia on March 10, with sources reporting his year of birth as 1971 or 1972. He took to music in a big way as a teenager and played in a band with future Neptunes founding members Magoo and Pharrell Williams (both fellow Virginians). In a region seemingly chock full of talent, Timbaland also befriended another Norfolk native who would go on to make a name for herself: Missy Elliott.

Elliot was in a group called Sista in the early 1990s. Sista was signed to a contract by Devante Swing, a member of the R&B group Jodeci; Timbaland got linked in and was soon a part of Swing’s crew, where he took on the roles of writer, producer and performer. It was while working on the Jodeci album The Show, the After Party, the Hotel that Swing gave the young performer the name Timbaland.

Soon Timbaland was branching out, making a splash producing the 1996 Ginuwine album Ginuwine…the Bachelor. The album contained the hit single “Pony,” and the sound the song introduced to the pop music landscape—R&B plus hip-hop held together by raspy snares—became one of the trademark styles of the 1990s. Around the same time, Timbaland co-produced singer Aaliyah’s sophomore effort One in a Million with Elliot, propelling both Norfolk natives to success and strengthening the bond between them.

Elliot tapped Timbaland’s talents for her 1997 solo debut, Supa Dupa Fly, which went on to be a huge hit on the back of such singles as "The Rain (Supa Dupa Fly)" and "Sock It 2 Me." The following year, Timbaland stepped into the recording booth himself and released his debut album, Tim's Bio: Life From da Bassment. He had accrued plenty of street cred to land such guest performers for the album as Nas, Jay-Z, Elliot and Ludacris (who was making his first appearance on any record), but it would be Timbaland's producing more so than his performing that would garner him the biggest hits.

Timbaland was unstoppable as the 1990s came to an end, producing such records such as Elliott's Da Real World and Miss E…So Addictive and tracks on Jay-Z's Vol. 3: Life and Times of S. Carter, including the hit "Big Pimpin'." Timbaland left his imprint on albums across the board, from Bubba Sparxxx to (still more) Missy Elliott to Justin Timberlake's 2002 album Justified, a smash that included the single "Cry Me a River." He also reteamed with Magoo during this period and put out a couple of albums (2001’s Indecent Proposal and 2003’s Under Construction Pt. II).

In 2006, Timbaland founded his own label, Mosley Music Group (MMG), a division of Interscope. The label had an instant hit with Nelly Furtado’s album Loose (featuring "Promiscuous," "Maneater" and "Say It Right"), and Timbaland had another smash on his hands with Justin Timberlake’s FutureSex/LoveSounds (featuring "SexyBack" and "My Love").

Along the way, Timbaland has produced albums for acts as diverse as Destiny’s Child, Madonna, M.I.A., the Fray, Ashlee Simpson, Snoop Dogg and Björk while also releasing two more efforts under his own name: Timbaland Presents Shock Value (2007) and Shock Value II (2009).

Timbaland continued his fruitful collaborations with Timberlake as seen on the two 20/20 Experience albums, both released in 2013, with the first album featuring the No. 2 hit "Mirrors." As of 2015, Timbaland has won four Grammy Awards in dance and R&B categories.

Timbaland entered the world of TV production when he was asked by director/screenwriter Lee Daniels to supervise the music for the 2015 record-label soap opera Empire. With Timbaland signed on as executive music producer, having his own team of song crafters, the show (starring Taraji Henson and Terrence Howard) has become a major hit. An accompanying soundtrack has been released as well.

Timbaland wed Monique Idlett in 2008, with the couple having a daughter together. Idlett filed for divorce in 2013, but the two reconciled the following year. Acting as her husband's business manager, Monique has also worked on Empire in a variety of capacities, putting in time as a script and style consultant.

(Profile photo of Timbaland by MJ Kim/Getty Images for MTV)