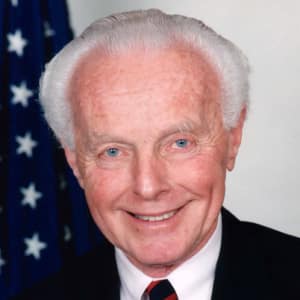 Tom Lantos was a 14-term member of the U.S. House of Representatives from the state of California, as well as the first and only Holocaust survivor to serve in Congress.

Tom Lantos was born on February 1, 1928, in Budapest, Hungary. When the Nazis occupied the Hungarian capital in March 1944, Lantos was sent to a labor camp, but escaped and joined the resistance. After the war, he received a Ph.D. in economics from the University of California, Berkeley, and was elected to represent California in the U.S. House of Representatives—becoming the first and only Holocaust survivor to serve in Congress. Re-elected 13 times, Lantos was a constant champion of human rights causes. He died in 2008.

Growing Up During the Holocaust

Politician. Thomas Peter Lantos was born February 1, 1928, in Budapest, Hungary, to a Jewish family. He is the only Holocaust survivor to serve in Congress. Lantos came from a family of teachers. One uncle was a professor at the University of Budapest and his grandmother was a high school principal. Lantos said he vividly remembered the first newspaper he ever bought at age ten. On March 13, 1938, while walking home from school, he was struck by the headline: "Hitler Marches into Austria!"

"I sensed that this historic moment would have a tremendous impact on the lives of Hungarian Jews, my family, and myself," he said. Lantos was 16 when Nazi Germany occupied the Hungarian capital in March 1944. He was sent to a labor camp in Szob, a small village about 40 miles north of Budapest. He and his fellow inmates were forced to maintain a key bridge on the Budapest-Vienna rail line. Lantos escaped, was captured and beaten, escaped a second time and returned to Budapest. He found refuge with an aunt, who lived in a safe house operated by Raoul Wallenberg, the Swedish diplomat who used his official status and visa-issuing powers to save thousands of Hungarian Jews (in 1981, Lantos sponsored a bill making Wallenberg an Honorary Citizen of the U.S.).

Lantos quickly joined the anti-Nazi resistance. Because of his "Aryan" coloring (blond hair and blue eyes), he was able to move around Budapest in a military cadet's uniform, secretly delivering life-saving food and medicine to other Jews in various safe houses. After a month-long, house-to-house battle, the Russians liberated Budapest in January 1945. Lantos tried to locate his mother and members of his family, but he gradually came to realize they had perished. His experiences in the Holocaust and afterward were highlighted in the Academy Award winning documentary The Last Days (1998) produced by Steven Spielberg's Shoah Foundation.

After the war, Lantos reunited with childhood friend and fellow Holocaust survivor, Annette Tillemann. She had gone into hiding with her mother shortly after the German occupation and escaped to Switzerland. They married in June 1950.

Lantos enrolled at the University of Budapest in the fall of 1946. After writing an essay on the late President Franklin D. Roosevelt, he was awarded a Hillel Foundation scholarship to study in the United States. He arrived in New York City in August 1947 with only a prized Hungarian salami which was promptly confiscated by U.S. customs officials. He earned his B.A. in 1949 and M.A. in 1950 in economics from the University of Washington in Seattle. He received a Ph.D. in economics from the University of California, Berkeley, three years later.

Lantos was a professor of economics at San Francisco State University. He also worked as a business consultant, served as a foreign policy commentator on television and served as a senior advisor to several U.S. Senators. In 1980, Lantos was elected to California's 11th congressional district (switched to the 12th district in 1993), which included the northern two-thirds of San Mateo County and a small portion of southwest San Francisco. He had challenged GOP incumbent Rep. Bill Royer and narrowly won with 46 percent of the vote. He won re-election 13 times by comfortable margins.

His moral authority, Hungarian accent and courtly demeanor was unique in Congress. But he wasn't afraid to create controversy or to make cutting comments in committee if the testimony he heard was not to his liking. "This is about as believable as Elvis being seen in a K-Mart," was his retort to a witness testifying in 1989 about the Reagan-era scandals at the Department of Housing and Urban Development. In November 2007, he shocked top executives of Yahoo Inc. at a hearing on the company's involvement in the jailing of a Chinese journalist by declaring, "Morally, you are pygmies."

Lantos founded the Congressional Human Rights Caucus in 1983. He was a strong supporter of Israel and supported both the 1991 Persian Gulf War and 2003 War in Iraq. He later became a strong critic of the Iraq War and opposed President George W. Bush's troop surge in 2007. "Our efforts in Iraq are a mess, and throwing in more troops will not improve it," he said at the time.

In 2004, he led the first congressional delegation to Libya in more than 30 years, meeting personally with Moammar Gadhafi. He urged the Bush administration to show "good faith" to the North African leader in his pledge to abandon his nuclear weapons programs. President Bush lifted sanctions against Libya later that year.

In 2006, Lantos was one of five members of Congress arrested in a protest outside the Sudanese Embassy over the genocide in Darfur.

In October 2007, as Foreign Affairs chairman, Lantos defied Bush administration opposition by promoting a measure recognizing the World War I-era killings of Armenians as a genocide. It was strongly opposed by Turkey and did not pass.

"It is only in the United States that a penniless survivor of the Holocaust and a fighter in the anti-Nazi underground could have received an education, raised a family and had the privilege of serving the last three decades of his life as a member of Congress," Lantos said upon announcing his retirement in January 2008. "I will never be able to express fully my profoundly felt gratitude to this great country."

Lantos, the only Holocaust survivor to serve in Congress, died February 11, 2008, at the Bethesda Naval Medical Center in suburban Maryland.