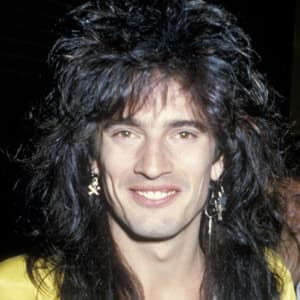 Tommy Lee is the drummer and co-founder of heavy metal band Mötley Crüe. He has two children with actress Pamela Anderson.

Who Is Tommy Lee?

Tommy Lee was born on October 3, 1962, in Athens, Greece, and was raised in California. He quit high school for a rock career and first performed with the band Suite 19. Lee formed heavy metal band Mötley Crüe with Nikki Sixx, Mick Mars and Vince Neil in 1981. Lee was married to actresses Heather Locklear and Pamela Anderson. In 1995, Lee and Anderson were the subjects of an infamous and widely distributed sex tape. Mötley Crüe reunited for multiple tours in the 2000s.

Musician Thomas Lee Bass was born on October 3, 1962, in Athens, Greece. The son of an American and a Greek national, Tommy Lee was raised in California and received his first drum set at age 4. He quit high school to pursue a rock career, first performing with the band Suite 19.

Tommy Lee formed Mötley Crüe with Nikki Sixx (bass), Mick Mars (guitar) and Vince Neil (vocals). The band got its start by touring with KISS in the early 1980s. Mötley Crüe was soon enjoying its own brand of notoriety thanks to Lee's headline-making behavior both on and off stage. The band had a fanatical fan base and released several top-selling albums, including 1987's Girls, Girls, Girls and 1989's Dr. Feelgood. Their string of hit singles, including "Shout at the Devil" and "Theater of Pain," established Mötley Crüe as the biggest rock band of the 1980s.

Though Tommy Lee is a critically acclaimed musician, the heavily tattooed drummer often received more attention for his personal life, particularly his turbulent marriages to actresses Heather Locklear and Pamela Anderson. His rocky relationship with Anderson was often fueled by the media, who eagerly covered their sex tape scandal and Lee's stint in prison after Anderson accused him of hitting her in front of their children, Brandon and Dylan. Though the couple divorced while he was in prison, they briefly reconciled after his release, before separating again.

Tommy Lee left Mötley Crüe in 1999, while still behind bars, and later formed the band Methods of Mayhem. The partnership was short-lived, however, and in 2002 he released his debut solo album, Never a Dull Moment. He briefly reunited with Mötley Crüe in 2005 for a greatest hits album and tour before continuing his solo efforts.

In 2005, Lee starred in a mildly successful reality television show, Tommy Lee Goes to College, where he was up to his usual antics, only this time in a university setting. He also published his memoir, Tommyland, in 2004.

Lee returned to reality television with rapper Ludacris for Battleground Earth on the Planet Green network in 2008. The two competed with each other while tackling "the toxic forces destroying Mother Earth," according to the show's website. The offbeat show had them handling such challenges as creating an eco-friendly funeral, and featured a range of special guests, including Gene Simmons, Meat Loaf, P. Diddy and Jane Fonda.

Lee announced his engagement to 31-year-old Vine star Brittany Furlan on Valentine's Day 2018, but soon found himself back in the headlines due to family trouble. This time, the problem was an altercation with his 21-year-old son, Brandon, that left him with a bloody lip. Brandon claimed he was defending himself from his drunken father, who countered that he was attacked while lying in bed.

In 2014, Mötley Crüe reunited for one more tour, with all four members agreeing to a contract to curtail future performances. The tour was set to run through the end of 2015.

In 2018, production on the Mötley Crüe biopic, The Dirt, was finally ready to get off the ground. Based on a best-selling autobiography written by the band and author Neil Strauss, the film was to feature rapper Machine Gun Kelly as Lee.