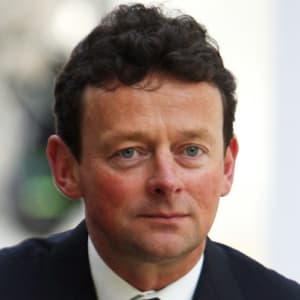 Tony Hayward was the CEO of BP when its rig Deepwater Horizon sank in the Gulf of Mexico, creating one of the greatest environmental disasters ever.

Tony Hayward became CEO of oil giant BP in 2007. In April 2010, BP’s Deepwater Horizon oil rig, off the coast of Mississippi, exploded, killing 11 people and spilling 5,000 to 100,000 barrels of oil into the Gulf daily. In July, BP announced that the well was capped, but by then experts estimated that more than 92 million gallons of oil had seeped into the Gulf, and Hayward was asked to step down.

Businessman and geologist Anthony Bryan Hayward was born on May 21, 1957, in Slough, Berkshire, England. As the eldest of seven children, Hayward was forced to mature at an early age. "The eldest gets to do everything, takes care of everyone," he later reflected. "It requires you to be responsible quite early." As a result, Hayward was a well-rounded high achiever – he captained the local soccer team while also passing his A-level qualifications in economics, chemistry and geology.

Hayward chose to study geology at Aston University in Birmingham, England, because the school had a good soccer team. Hayward changed his focus, however, once he truly discovered the joys of geology. "[I] found learning about the evolution of the earth fascinating," he said. "I had every intention of following an academic career." Hayward graduated with honors in geology, and followed his undergraduate degree with a PhD in the same subject at Edinburgh University. Finishing up his advanced education at the age of 22, Hayward began looking for new challenges in his field. He found them in the world's oil fields.

In 1982, shortly after graduation, British Petroleum's chief geologist recruited Hayward to become a rig geologist. Hayward worked on an offshore oil rig in Aberdeen, Scotland, and rose quickly through the ranks, traveling the world as a field geologist until he caught the eye of CEO Lord Edmund John Philip Browne at a leadership conference in 1990. Impressed with Hayward's direct manner and charming demeanor, Browne tapped the geologist to become one of his personal assistants in the Exploration and Production division.

In 1992, he moved to Colombia as exploration manager, and became president of BP's operations in Venezuela three years later. He became chief executive of BP's Exploration and Production division in January 2003, taking Browne's position after the Lord became the company's CEO. While serving in the position, Hayward became the implied successor to Browne's CEO title.

After an English newspaper threatened to publish private details about Lord Browne's sexual orientation, the BP executive landed in court to prevent a story about his partner, Jeff Chevalier, going to press. While under oath, Browne lied about his relationship with Chevalier. After perjuring himself, Browne was forced to resign from his post at BP in 2007. Hayward assumed the mantle of CEO in May of that same year.

In April 2010, Hayward made headlines when the Deepwater Horizon oil rig, off the coast of Mississippi, exploded, killing 11 people. To add to the tragedy, oil began to leak from the rig at a rate estimated to be somewhere between 5,000 and 100,000 barrels a day. Hayward attempted to downplay the spill, calling it "relatively tiny." But by May 2010, the oil continued to gush from the well, and efforts to stop the leak were relatively ineffective. President Barack Obama demanded that BP compensate victims of the tragedy through a $20 billion escrow fund, and set up a criminal investigation in order to explore the events that led to the spill.

Yet while the rig poured gallons of oil into the gulf in June, Hayward was spotted enjoying a yacht race – a faux pas not easily forgotten by thousands of angry Gulf Coast residents. In July, BP announced that the well was officially capped but, by then, experts estimated that more than 92 million gallons of oil had seeped into the Gulf of Mexico. Hayward later told reporters the catastrophe was like "stepping out from the pavement and being hit by a bus."

In the wake of what environmental experts and political pundits refer to as one of the largest environmental catastrophes in history, and what BP experienced as a $17 billion business loss, Hayward was asked to step down from his post. Bob Dudley, an American in charge of BP's oil spill response unit, was tapped to take over for Hayward. BP currently plans to nominate Hayward as a non-executive director for its Russian joint venture, a company called TNK-BP. The executive also received a compensation package of more than $1.5 million, with an annual $500,000 pension.

Hayward is married to geophysicist and former BP employee Maureen Hayward. The couple resides just outside of London, England, and has two adult children, Kieran and Tara.