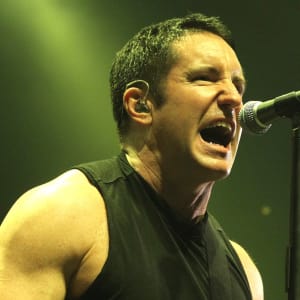 Singer-songwriter Trent Reznor has won numerous awards for his popular industrial rock act Nine Inch Nails and for his work on movie soundtracks.


Trent Reznor first rose to fame as the frontman of Nine Inch Nails with the 1989 album Pretty Hate Machine and landed his first major hit with the 1992 EP Broken. His dark, aggressive rock continued to win over many music fans with such albums as The Downward Spiral (1994), The Fragile (1999) and With Teeth (2005). Reznor is also a successful soundtrack composer. In 2010, he won an Academy Award for his work on The Social Network.


Born on May 17, 1965, in Mercer, Pennsylvania, Trent Reznor is best known as the man behind the complex, haunting industrial rock act Nine Inch Nails. He took up the piano as a child and studied classical music, later learning to play sax and tuba. After his parents’ divorce, Reznor was largely raised by his maternal grandparents. His grandfather, Bill Clark, told People magazine that Reznor was “always a good kid” and that “music was his life . . . . He was so gifted.” As a teen, Reznor abandoned his classical training and played keyboards in several bands.

After high school, Reznor briefly attended Allegheny College before moving to Cleveland. There he played in several bands and held various jobs until eventually finding work in a recording studio. The studio's owner allowed him to use the space for his own efforts in his off-time. One of the demos Reznor created there—on which he played all the instruments himself—led to several offers from labels, and in 1988 he signed with TVT.


Reznor released his first Nine Inch Nails album, Pretty Hate Machine, in 1989. With its dark lyrics and driving sound, the record quickly became popular on college radio, and the video for the song “Head Like a Hole” enjoyed substantial airplay on MTV. To support the album, Reznor also assembled a band and toured for several years, with notable performances at the Lollapalooza music festival and opening slots for Guns 'n Roses.

Despite the success of Pretty Hate Machine, it took some time for Reznor to complete a follow-up effort, due to creative disputes with his label. However, he eventually reached an agreement that allowed him to go to Interscope, who also gave him his own label, called Nothing. The eight-song EP Broken debuted in 1992 and reached No. 7 of the album charts. The following year, Reznor also won his first Grammy, for the track “Wish,” in the best metal performance category.

Never shying away from controversy and disturbing imagery, Reznor had some of his videos for songs on Broken banned for their violent and unsettling content, including “Happiness in Slavery,” in which a man is shown being tortured by a machine. (A live recording of this song later brought his second best metal performance Grammy in 1995.)

With 1994’s The Downward Spiral—which was recorded in a studio he built in the house where actress Sharon Tate and several of her friends were murdered by followers of Charles Manson—Reznor continued his ascent in the music world. The album reached No. 2 on the charts and sold roughly 5 million copies, with such popular tracks as “Closer” and “Hurt.” Five years later, he outdid himself with the double album The Fragile, which hit the top of the charts and featured the single "The Day the World Went Away," Nine Inch Nails' first Top 40 hit.

While continuing to tour and record as Nine Inch Nails, Reznor released albums such as With Teeth (2005), which featured the popular singles "Only" and "Every Day Is Exactly the Same"; the No. 2 charting Year Zero (2007); the all-instrumental offering Ghosts I-IV; The Slip (2008) and Hesitation Marks (2013). In December 2015, Reznor announced that a new Nine Inch Nails album would be released in 2016.


In addition to his work as Nine Inch Nails, Reznor has also become an accomplished soundtrack producer and composer. He started out working on such films as Oliver Stone’s Natural Born Killers (1994) and David Lynch’s Lost Highway (1997). More recently, Reznor teamed up with Atticus Ross to create the score for The Social Network (2010), which earned them both an Academy Award. They also picked up a Grammy in 2012 for best original score for visual media for their work on The Girl with the Dragon Tattoo.

Reznor is also active in the music streaming business. He first worked as the chief creative officer of Dr. Dre's Beats Music and later became involved with the Apple Music streaming service. Reznor is married to singer Mariqueen Maandig. The couple has two sons, Lazarus and Balthazar.