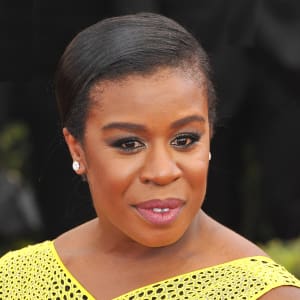 Uzo Aduba is an Emmy-winning American actress known for playing Crazy Eyes on the Netflix series ‘Orange Is the New Black.’

Who Is Uzo Aduba?

Uzo Aduba was born in February 1981 in Boston and went on to attend Boston University on an athletics scholarship. While there, the voice major fell in love with acting, and she moved to New York City after graduation to pursue a career on the stage. After appearing in Off-Broadway productions, Aduba made her Broadway debut in 2007. But it would be TV that put her on the map when she landed the role of "Crazy Eyes" Warren on the popular Netflix series Orange Is the New Black, a role that would bring fame and acclaim to Aduba's doorstep, along with two Emmy Awards.

Uzo Aduba was born on February 10, 1981, in Boston and raised in Medfield, Massachusetts. Growing up, the name she was given (in full, Uzoamaka) in the Nigerian Igbo tradition caused her some grief, when kids at school couldn’t pronounce it. When Aduba asked her mother if she could change it to Zoe, her reply was poignant: “If they can learn to say Tchaikovsky and Michelangelo and Dostoyevsky, they can learn to say Uzoamaka.”

Did you know? Uzo Aduba was a high school track star who won an athletics scholarship to Boston University.

After graduating from Medfield High School, Aduba rode a track and field scholarship to the College of Fine Arts at Boston University, where she began classical voice training to refine her “very dramatic soprano,” as she calls it. At BU, she cultivated a love of the stage, and her acting teachers encouraged her to pursue acting instead of a vocal career. That encouragement, paired with a growing interest in the stage, was enough to make her switch gears and move from Massachusetts to New York City, where she pursued an acting career.

Aduba moved to New York in the early 2000s. She took on unpaid roles while waiting tables to get a foot in the door. Before long, though, she found her way to the New York stage, performing at the Theater for the New City and with the Huntington Theatre Company and the American Repertory Theater. With the latter, she won an Elliot Norton Award for Outstanding Musical Performance, and for her work in a Kennedy Center production of Translations of Xhosa, Aduba was nominated for a Helen Hayes Award.

During this period she segued into film roles, appearing in shorts such as Notes (2005) and Over There (2007). Also in 2007, Aduba made the leap to Broadway in Coram Boy, following up with a role in the hit 2011-12 revival of Godspell.

'Orange Is the New Black'

Aduba was on the cusp of the next stage of advancing in her career, and she passed the tipping point when she made her TV debut in 2012 on the CBS drama Blue Bloods. It was a small role, but what was waiting on the other side of it wasn’t: a key part on the new Netflix original series Orange Is the New Black. Set in a women’s prison, Orange Is the New Black let Aduba try out a whole new set of acting skills as Suzanne “Crazy Eyes” Warren, a character who has become something of a cultural phenomenon.

For her work as Crazy Eyes, Aduba has garnered millions of fans, critical acclaim and industry honors such as a Screen Actors Guild Award for Outstanding Performance by a Female Actor in a Comedy Series and a 2014 Emmy for Outstanding Guest Actress in a Comedy. She won another Emmy the following year, this time for Outstanding Supporting Actress in a Drama Series, making her and Ed Asner the only actors in history to win an Emmy in both the comedy and drama categories for the same role.