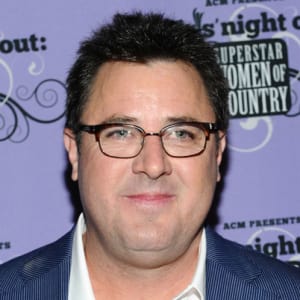 Vince Gill is an award-winning country musician known for such hits as ‘What the Cowgirls Do’ and ‘Whenever You Come Around.’

Born in Oklahoma in 1957, Vince Gill's first solo album, Turn Me Loose (1984), earned him the Academy of Country Music's Top New Male Vocalist Award. In 1989, Gill recorded When I Call Your Name, which was certified double platinum for 2 million copies sold, while the title track earned Gill a 1990 Grammy Award for best country song. Gill has since won more than a dozen Grammys and several other awards.

Country singer-songwriter Vince Gill was born Vincent Grant Gill on April 12, 1957, in Norman, Oklahoma. Gill's father, an appellate judge, taught him to play the guitar at an early age. Throughout his teens, he performed with local bluegrass groups, including the Bluegrass Alliance, Mountain Smoke and Boone Creek with future country star Ricky Skaggs.

In 1976, Gill joined the California-based band Pure Prairie League. The group's 1980 release, Firin' Up, featured six songs by Gill, including the No. 1 country hit "Let Me Love You Tonight." During his stay in California, Gill met and married fellow aspiring musician Janis Oliver, with whom he had a daughter, Jenny, in 1982.

Gill briefly joined Rodney Crowell's band, the Cherry Bombs, before moving to Nashville, Tennessee, where he signed a solo contract with RCA Records in 1983. His first album with RCA, Turn Me Loose (1984), proved to be an auspicious debut, earning Gill the Academy of Country Music's Top New Male Vocalist Award. However, after an impressive start, Gill achieved only moderate success with his subsequent recordings. His most notable work during this time was as a session guitarist, playing with Reba McEntire, Emmylou Harris, Roseanne Cash and Bonnie Raitt.

In 1989, Gill switched labels and recorded the traditional country album, When I Call Your Name, for MCA. Eventually, the album was certified double platinum for two million copies sold, while the title track earned Gill a 1990 Grammy Award for Best Country Song. His next albums, Pocket Full of Gold (1991) and I Still Believe in You (1992), were also multi-platinum successes.

The release of When Love Finds You (1994), which featured the Top 10 singles "What the Cowgirls Do" and "Whenever You Come Around," marked Gill's crossover to the pop charts. The albums, High Lonesome Sound (1996) and The Key (1998), had phenomenal sales and helped make Gill one of the most recognized and beloved artists in the industry. Released in 2000, Let's Make Sure We Kiss Goodbye, featured Gill's daughter Jenny on supporting vocals.

In 2003, Gill followed up the success of Let's Make Sure We Kiss Goodbye by releasing the album Next Big Thing, his first album that was solo-produced. He later reunited with Crowell in 2004 to reform the Cherry Bombs, this time going by the Notorious Cherry Bombs. The group released their self-titled album, along with the track "It's Hard to Kiss the Lips at Night that Chew Your Ass Out All Day Long," in the same year. In 2006, Gill released These Days—a four-disc project that included various types of music, such as bluegrass and traditional, and several popular artists, such as Leann Rimes, Bonnie Raitt and Michael McDonald. After several years, Gill officially joined the group The Time Jumpers in 2010, with whom he regularly performs.

Outside of his prolific music career, Gill has been recognized for his community involvement and participation in charity events, such as the annual Vince Gill Celebrity Basketball Game and the Vinny Pro-Celebrity Golf Invitational.

Gill and Oliver divorced in 1997, ending their marriage after 17 years. In March 2000, Gill married Christian pop singer Amy Grant. The couple's first child together (Grant has three children from a previous marriage), a girl named Corrina, was born the following year.