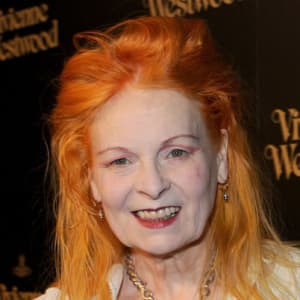 Who Is Vivienne Westwood?

Vivienne Isabel Swire was born in Glossop, Derbyshire, England, on April 8, 1941. Considered one of the most unconventional and outspoken fashion designers in the world, Westwood rose to fame in the late 1970s when her early designs helped shape the look of the punk rock movement.

How Much Is Vivienne Westwood Worth?

Westwood's net worth is an estimated $55 million, according to Celebrity Net Worth.

In 1962 Westwood married Derek Westwood and had a son. The couple divorced three years later.

After partnering with Sex Pistols manager Malcolm Mclaren and having another son with him, Westwood married for a second time, this time to her assistant, Andreas Kronthaler, in 1992.

In 1971 Mclaren opened a boutique shop at 430 Kings Road in London and started filling it with Westwood's designs. While the name of the shop seemed to be in constant flux — it was changed five times — it proved to be an important fashion center for the punk movement. When Mclaren became manager of the Sex Pistols, it was Westwood's designs that dressed the band and help it carve out its identity.

But as the punk movement faded, Westwood was hardly content to rest on her laurels. She's constantly been ahead of the curve, not just influencing fashion, but often times dictating it. After her run with the Sex Pistols, Westwood went an entirely new direction with her Pirate collection of frilly shirts and other attire. Her styles have also included the mini-crini of the 1980s and the frayed tulle and tweed suit of the 1990s. She's even proved it's perfectly possible to make a subversive statement with underwear. "Vivienne's effect on other designers has been rather like a laxative," English designer Jasper Conran once explained. "Vivienne does, and others follow."

Coupled with Westwood's unconventional style sense, is an outspokenness and daring that demonstrates a certain level of fearlessness about her and her work. In one famous incident she impersonated Margaret Thatcher on the cover of a British magazine. To do so, she wore a suit Thatcher had ordered but not yet received, an act that made Thatcher irate.

Still, Westwood's influence is hard to deny. Twice she has been named British designer of the year and was awarded the O.B.E. (Most Excellent Order of the British Empire) in 1992.

For more than 30 years, even after she had long made her fortune and fame, Westwood lived in the same small South London apartment, paying just $400 a month for the home and riding her bike to her studio in Battersea.

In 1992, ten years after Westwood and Mclaren split, Westwood married for a second time, to her assistant, Andreas Kronthaler, who is 25 years her junior. Today, Kronthaler is her design partner. The couple resides in South London.

In June 2018 a documentary entitled Westwood: Punk, Icon, Activist was released in the U.S., which follows Westwood's life from housewife to fringe designer to fashion icon. Directed by Lorna Tucker, the documentary has been praised by some critics, but Westwood has scoffed at it, pointing out specifically, that it hardly covered her environmental activism.

Westwood publicly made a statement about her disappointment in the film: "It’s a shame… the film is mediocre, and Vivienne and Andreas are not.”

Born Vivienne Isabel Swire on April 8, 1941, in the English town of Glossop in Derbyshire, Westwood came from humble beginnings. Her father was a cobbler, while her mother helped the family keep ends meet by working at a local cotton mill.

At the age of 17, Vivienne's family moved to Harrow in the country of Middlesex, where the future fashion icon found work at a local factory and eventually enrolled at a teacher training school.

As Vivienne would later recall, her childhood years were far from London's high life. "I lived in a part of the country that had grown up in the Industrial Revolution," she once said. "I didn't know about art galleries…I'd never seen an art book, never been to the theatre."

By the early 1960s Vivienne's life seemed established. She'd married Derek Westwood, with whom she had son, Ben, and embarked on work as a teacher. Then, however, everything changed. Her first marriage dissolved and she met Malcolm Mclaren, an art student and future manager of the Sex Pistols. With Mclaren, Westwood had a second son, Joseph. Through her new partner, Westwood, who'd begun making jewelry on the side, was introduced to a new world of creative freedom and the power art had on the political landscape. "I latched onto Malcolm as somebody who opened doors for me," Westwood said. "I mean, he seemed to know everything I needed at the time."