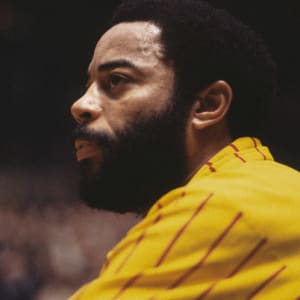 Walt Frazier is a basketball player who was one of the finest professional guards in the late 1960s and early ’70s.

Born on March 29, 1945, in Atlanta, Georgia, basketball great Walt Frazier was eventually named to the NBA All-Rookie team. In 1969–70, his third season in the league, he made his first of seven All-Star appearances, helping the New York Knicks win their first NBA title. Frazier scored 15,581 points in his Hall of Fame career and had more than 5,000 assists and nearly that many rebounds. He was selected for the league's All-Defensive team seven times, and later established a career as a broadcaster and restaurateur.

Walter Frazier Jr. was born on March 29, 1945, in Atlanta, Georgia. The oldest of nine children, Frazier grew up with little money and learned to play basketball on a dirt playground near his home. He proved an exceptional athlete, however, and starred in baseball, football and basketball at David T. Howard High School. After turning down football scholarships from such major schools as the University of Kansas and Indiana University, he enrolled at Southern Illinois University.

Rendered academically ineligible to play basketball as a junior, Frazier used the time to focus on his schoolwork and improve his defensive fundamentals. His return to the court for the 1966-67 season was a triumph, as he helped Southern Illinois become the first small school to win the National Invitation Tournament. He was then selected with the fifth pick in the 1967 NBA draft by the New York Knicks.

Frazier got off to a slow start with the Knicks, but he adjusted to the fast, physical NBA game and was named to the All-Rookie Team at the end of the 1967-68 season. The Knicks soon developed into one of the league's best all-around teams, and Frazier one of its leading players. Possessing quick hands that were reputed to be "faster than a lizard's tongue," he was named to the All-NBA Defensive Team for the first of seven straight seasons in 1969, and earned the first of four All-NBA First Team selections in 1970.

Frazier also became a celebrity known for his flamboyant style, colorful outfits and mink coats, catching the attention of the New York City tabloids. Fond of the wide-brimmed Borsalino hats worn by Warren Beatty in the 1967 film Bonnie and Clyde, he became known as "Clyde" among his teammates. But despite the loud fashion statements, he was famously cool on the court, rarely displaying any sign of fatigue or frustration.

The Knicks jelled into a juggernaut during the 1969-70 season, winning a then-record 18 consecutive games at one point before advancing to the NBA finals to play the Los Angeles Lakers. While Game 7 of the series is mainly remembered for the inspirational jolt provided by injured captain Willis Reed, it was Frazier who carried the Knicks with 36 points, 19 assists and five steals to seal the first championship in franchise history.

Paired with fellow All-Star Earl Monroe in the famed "Rolls Royce backcourt" beginning in 1971, Frazier guided the Knicks to a return trip to the NBA finals in 1972 and a second championship the following year. He continued to dazzle even as the Knicks dynasty crumbled, scoring 30 points to win All-Star MVP honors in 1975, but he was traded to the Cleveland Cavaliers after the Knicks missed the playoffs for the second straight year in 1977.

Frazier retired after playing just three games with the Cavaliers in 1979. A seven-time All-Star, he finished his career as the Knicks's all-time leader in points, assists and games played. He was inducted into the Naismith Memorial Basketball Hall of Fame in 1987 and named to the NBA 50th Anniversary All-Time Team in 1996.

Careers in Broadcasting and Cuisine

Frazier became involved in an array of endeavors after retiring from the NBA, including a stint as a player agent. He spent much of his time in the U.S. Virgin Islands, where he obtained a charter-boat captain's license and opened a bed and breakfast.

Frazier became a broadcaster with the NBA's Atlanta Hawks in 1981 before joining the Knicks in that capacity in 1987. Known for peppering his analysis with such colorful phrases as "dishing and swishing," he endeared himself to new generations of basketball fans who had never seen him play.

In 1996, the basketball great formed The Walt Frazier Youth Foundation to provide support for inner-city high school students. In 2012, he opened Clyde Frazier's Wine & Dine restaurant in Manhattan, near the Madison Square Garden court that produced some of his finest moments as a player.