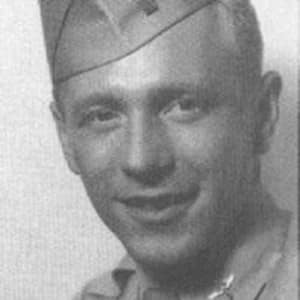 Walter Haut is best known for drafting a 1947 press release for the U.S. Army that claimed a “flying disc” had landed in Roswell, New Mexico.

Born in 1922 in Chicago, Illinois, Walter Haut worked as the public information officer for the U.S. Army's 509th Bomb Group in Roswell, New Mexico. In 1947, he was instructed to issue a press release stating that a "flying disc" had landed near the base. The Army quickly retracted the statement, saying the object was a weather balloon. Haut later claimed to have seen such a spacecraft. He died in 2005. Speculation about UFOs and aliens at Roswell has persisted.

Born on June 3, 1922, in Chicago, Illinois, Lieutenant Walter G. Haut became famous after reporting that an alien spaceship had crashed near Roswell, New Mexico, in July 1947. Serving as public relations officer of the Roswell Army Air Field, Haut released a press release acknowledging that a flying disc had been recovered in the desert. Shortly after the incident was reported, the military retracted the story. What exactly happened in the New Mexico desert all those years ago remains a source of fascination for many to this day.

Before working at the Roswell Army Air Field, Walter Haut had served during World War II. He acted as a bombardier in missions over Japan and worked on the atomic tests in the South Pacific. His job putting out press releases seemed much less adventurous until that fateful time in July 1947. A rancher discovered some type of wreckage on his property and members of the U.S. Army Air Corps went out to the site to investigate. It is believed that the crash occurred on or around July 2. Stories regarding the crash of an unidentified flying disc soon spread among the residents of the small Southwestern town.

On July 8, Walter Haut wrote the now-infamous message to the press on the orders of the base commander, Colonel William Blanchard. It read, in part: "The many rumors regarding the flying disc became a reality yesterday when the intelligence officer of the 508th Bomb Group … was fortunate enough to gain possession of a disc." That day, the news made the headline of the local paper: "RAAF Captures Flying Saucer on Ranch in Roswell Region." Haut later told a Denver Post reporter, "When that hit the news wires, the world came to an end, as far as I was concerned. My phone rang and rang and rang."

But no sooner had Haut released the information about the flying disc than he was asked to report a completely different story. The military now claimed that the wreckage was only a high-altitude weather balloon, not a UFO. At this time, Haut never claimed to have seen the alleged alien craft and the alien bodies recovered at the crash site.

Haut left the military in 1948 and spent the rest of his life in Roswell, where he and his wife, Lorraine, raised two daughters, Marabeth and Julie. Haut worked as an insurance agent for many years in his later life, but the mystery of the so-called Roswell incident continued to fascinate him. With Max Littell and Glenn Dennis, Haut founded the International UFO Museum and Research Center in 1991.

Over the years, Haut became more public with what he believed happened in 1947. "I think it was an extremely well-planned cover-up," he told the press in 1997.